Will Amish Vote For Trump?

That’s the question a pair of articles have addressed, following the launch of a Political Action Committee (PAC) seeking to motivate Amish to vote in Ohio and Pennsylvania. 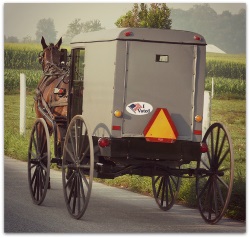 The Amish PAC’s plans are to reach potential Amish voters via advertisements in three newspapers targeted to the Lancaster County and Holmes County communities, and via billboards in Holmes County. The PAC’s outreach director, Ben King, grew up in an Amish family.

There was a similar concerted effort to get Amish to the polls for George W. Bush in 2004, which succeeded to some degree. That is detailed in the article by Donald Kraybill and Kyle Kopko called “Bush Fever: Amish and Old Order Mennonites in the 2004 Presidential Election.”

As far as a PAC targeting the Amish, Kraybill commented for Lancaster Online that “I have never heard of this kind of thing before…I think it’s unprecedented.”

When Amish vote, they vote for individual rights, personal responsibility, less government, lower taxes, and to protect their right to bear arms.

The objective of Amish PAC’s Plain Voter Project is to drive up Amish voter registration and turnout.

Increasing Amish turnout by even 5% in 2016 could be the difference between a Republican president and Hillary Clinton.

Since Amish have their largest two population groups in Pennsylvania and Ohio, two key swing states, the  “Will the Amish vote?” question seems to arise every four years.

I spoke with the writer for another article at vice.com, and expressed my skepticism that Amish would vote in any significant numbers for Donald Trump.

The biggest reason is that I don’t think he is perceived as a particularly religious, or family values-oriented candidate, as Bush was in 2004, and which drove a lot of his appeal among the Amish.

But that leaves beside the bigger issue that Amish people traditionally aren’t that politically involved (for more on why, see here).

So does putting resources into an Amish PAC even make sense? Incoming Young Center senior fellow Steve Nolt notes that “This could really turn out to be something, but I’d be surprised if it would just because it would really be going against the grain.”

Kraybill’s comments in the vice.com article are similarly negative:

Kraybill estimates that only about 4,000 to 5,000 Amish votes are in play in Ohio and Pennsylvania, which is probably not enough to tip a swing state in one direction or the other.

Considering the scale of effort required to get the Amish’s attention, Kraybill said, “it’s not worth the effort, frankly.”

The Amish PAC aims to spend about $40,000 on their outreach campaign.

You don’t find that kind of money laying on the street. But when hundreds of millions of dollars are spent on the election process, I guess it’s just a drop in the bucket.