Towards the end of the Kutztown University Old Order peoples talk, Ben Riehl made a remark–I’m paraphrasing here–that “the Amish and Mennonites are just a small piece of a much bigger Pennsylvania German story”.

Pennsylvania German Cultural Heritage Center director Dr. Rob Reynolds has shared a little bit of that story with us today. The Amish and Mennonites were in fact only a small segment of the many thousands of Pennsylvania German people who immigrated to America beginning in the 17th century. 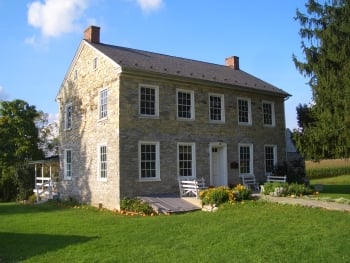 The work of Dr. Reynolds and the Center includes promoting the Pennsylvania German dialect and culture.  Last summer I had a chance to visit the Center, which included a visit to the on-site one-room schoolhouse and Pennsylvania German home, which you can see in the photos on this page.  Thanks to Dr. Reynolds for sharing a little more about this unique and fascinating cultural group.

Amish America: Can you describe the background and history of the Pennsylvania German peoples?

Dr. Rob Reynolds: The Pennsylvania German culture that we know today is the result of a mass migration of ethnically similar peoples of Germanic descent. The vast majority of these immigrants came from the southwestern portions of what is today Germany including Rhineland- Pfalz, Württemberg, and Swabia, the Alsace-Lorraine region of France and portions of northern Austria and Switzerland. These people shared a common language, ethnic culture, and religion. Those leaving these areas went to other European countries, South America, and North America. 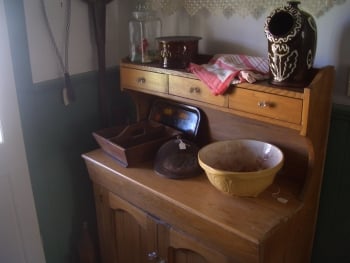 The Pennsylvania Dutch left Europe for several reasons, some of which derived from religious persecution resulting from new ideas that developed during the Protestant Reformation, and because of a lack of land and opportunity present as the population grew during the eighteenth century and land became harder to acquire for the younger generation. Under an oppressive feudal structure in Europe, most farmers did not own their houses or even the crops they grew.

William Penn’s promises of religious and personal freedom offered a chance to escape these conditions and presented hope that conditions could improve for immigrants and their children. In 1683 the village of Germantown was established by a group of Mennonites led by Francis Daniel Pastorius, and in succeeding years other groups, such as the Dunkards and the Moravians, settled in Pennsylvania. The Anabaptist groups of the Amish, Mennonites, Dunkards, and Brethren were conservative separatist Protestant Christian sects that left Europe to practice their religious convictions. The vast majority of Pennsylvania Germans were Lutheran and Reformed church members. 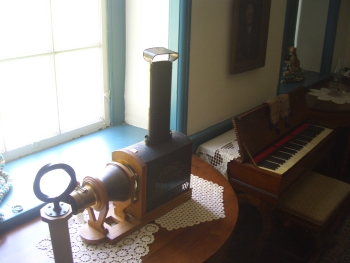 The bulk of Pennsylvania Dutch immigration occurred after 1710, when the Germans from the Palatinate first arrived. Many of these people had sought economic and religious freedom in England; from there a number were sent to the Hudson valley to engage in the production of naval stores, but with the failure of that project many Palatines moved to the Tulpehocken region Berks County Pennsylvania. Enthusiastic written accounts of the opportunities in America brought other settlers from Germany with over 80,000 immigrating before the American Revolution making Pennsylvania approximately one-third German at the time.

The Pennsylvania Dutch helped settle and clear the vast frontier during the 18th century. The earliest settlers of Pennsylvania were English and Swedish immigrants who had settled the best lands around Philadelphia. By the time large groups of Germans were arriving the best farmlands were in the frontier areas of what are now Berks, Bucks, Lancaster, Lebanon, Lehigh, Montgomery, and Northampton counties. These areas possessed the most open spaces; amble land; and most notably, similar topography, climate, and foliage to the areas where most Pennsylvania Dutch immigrants came from.

From Pennsylvania the Germans followed the frontier into northwestern New Jersey, central and western Maryland, along the Shenandoah Valley of Virginia, and into North Carolina. The Pennsylvania Dutch that settled Berks County included the Palatines led by Conrad Weiser to western Berks and immigrants that followed the Schuylkill River from Philadelphia to take up lands on the frontier in the Oley Valley beginning in the 1710s and 1720s. By the 1730s Pennsylvania German came over the Oley hills into the fertile limestone lands of the East Penn Valley that envelops the Kutztown area. 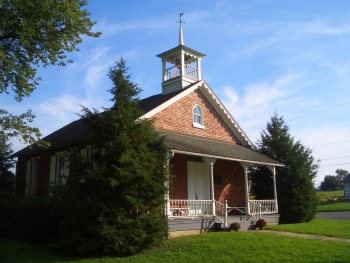 In Pennsylvania, a group of six or seven families often owned as much land as an entire village in Europe populated by hundreds of people. The Pennsylvania Dutch sought the limestone soils of our region for its fertility and similarity to what they had known in Europe. Our topography of long relatively flat valleys sided by mountain ridges looks quite similar to the landscape of the Palatinate region.

At first they took up lands, cleared the forest and built log houses similar in plan to continental European peasant three room houses. Over time the log houses were replaced with stone buildings reflecting a hybrid of influences creating an American style. Barns, uncommon until the 1790s, became larger over time as farming practices resulted in greater crop yields. The rural lifestyle of the Pennsylvania Dutch fostered cooperation and the persistence of religious, language, and cultural traditions directly related to their European origins survived well into the twentieth century.

Amish America: How many people of Pennsylvania German heritage live in the region? 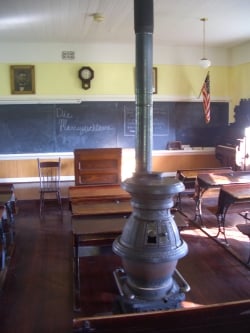 Amish America: What visible signs of Pennsylvania Dutch culture can we find today?

In Berks County alone, there are many townships and boroughs with Pennsylvania Dutch roots. Towns like Kutztown, Bechtelsville, Wernersville, Schaefferstown and Mohrsville are directly named for Pennsylvania Dutch settlers, while towns like Hamburg and Womelsdorf are influenced by the German settlers. Similar townships include Heidelberg and Muhlenberg. 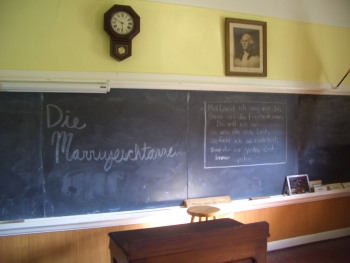 Even less obvious connections such as the township of Alsace are indicative of the Germanic French Huguenots who were among the Dutch. Throughout the county one is also hard pressed to find a town that does not feature some Pennsylvania Dutch road or street. In Kutztown alone we have Sharadin, Heffner, Stimmel, and Schaeffer.

The landscape of our region largely resulted from the efforts of the Pennsylvania Dutch. The log and limestone houses, barns, and outbuildings, reflect Germanic traditions of craftsmanship. The churches of the plain and fancy Pennsylvania Dutch speak of the religious traditions. The open farm fields with hedgerows, orchards, fence lines, and other elements of the landscape reflect Pennsylvania German heritage.