The US is currently experiencing a measles outbreak, the largest in 25 years. The Center for Disease Control reports a confirmed 764 cases in 23 states as of a week ago.

This includes New York and most surrounding states. States in dark blue in this CDC map have reported cases: 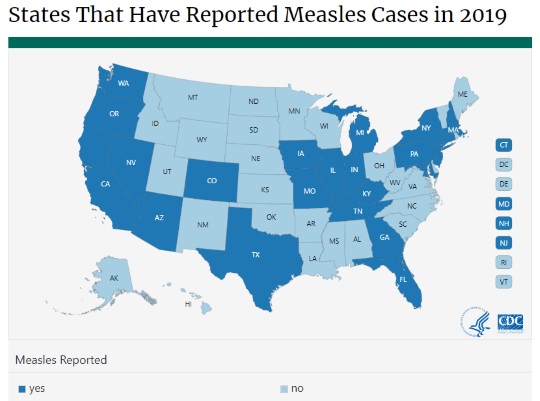 The source of the measles is travelers returning from countries where large outbreaks are currently occuring.

One of the largest areas of outbreak happens to be in the Orthodox Jewish community in New York City, a similarly low-vaccinated group.

From the Olean Times Herald:

“This is going to be a problem for our county because of the Amish,” he explained.

The public health director said he wants to sit down with the bishops who lead the county’s Old Order Amish community “to come up with a plan to deal with it.”

Board of Health member James J. Snyder of Olean, the chairman of the County Legislature, said that would apply with children attending public schools.

“If they’re not vaccinated, they won’t be allowed to go to public schools,” he said.

That possibility is probably not what’s going to motivate Amish to take action. Amish children in some areas do go to public schools, but this tends to be the more progressive Amish groups (particularly in Holmes County, Ohio and northern Indiana). The Amish in Cattaraugus County are one of the more traditional affiliations (Troyer Amish). 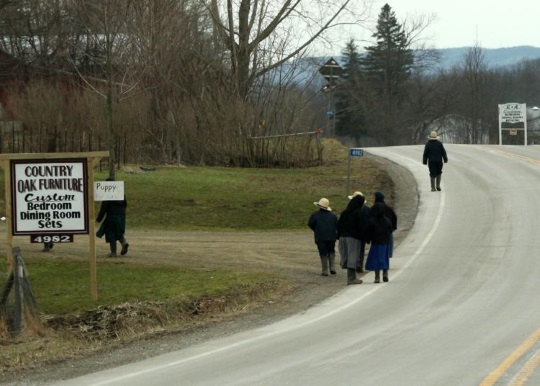 It might take illness in their own community to spur action. This is what has played out in the past in other communities, most notably in heavily-Amish Holmes County in 2014, which registered 383 measles cases, leading to thousands of Amish getting vaccinated.

But hopefully not, and maybe the sit-down with the bishops will bear fruit before people get sick. Measles can be deadly; the disease can lead to complications which can cause death or permanent disability. Children under age five are at greater risk.

Amish have concerns about vaccinations (and some have religious objections), but as with anyone, they are more apt to agree to them once they have a better understanding of the purpose and safety/benefits equation. Unfortunately that education opportunity tends to come once disease has already struck a settlement.

On the other hand, health officials in NYC have ordered unvaccinated residents of certain zip codes to be inoculated, under threat of a $1,000 fine. I understand the public health concern but essentially forcing vaccination strikes me as heavy-handed.

In any case I would hope both sides are going to come to the discussion open to the concerns of the other side, which will likely lead to a better chance of a good outcome, and without coercion.

However, based on the following bit from the article, that might be wishful thinking:

In attempting to check on the condition on one of the youths, a Health Department nurse was locked out of one house, Moore said.

The bishops, Moore added, are still not going to advise community members to get their children vaccinated.

It’s possible that religious objections may be involved in this situation, which will mean it is going to be less likely that Amish in this community will take action.