If measuring by sheer numbers of Amish, Branch County, Michigan is well behind Lagrange County, Indiana just to the southwest. Yet in another way Branch County is quite the “Amish County” – home to 5 separate Amish settlements, some of whom are very plain. The oldest, lying in California Township, has been around nearly six decades. So this is a community where non-Amish people have long lived alongside an Amish presence. 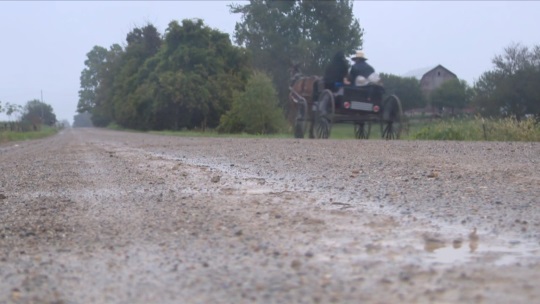 Recently, however, local leaders have been pushing for a change in the status quo, seeking mandatory licensing as well as requiring lighting on buggies. From WWMT:

The Branch County Farm Bureau passed a resolution in the hopes the Michigan Farm Bureau will convince lawmakers that something needs to be done.

Outside the town of Quincy, a stretch of Lester Road in Algansee Township has plenty of wear and tear.

“It’s detrimental to your vehicle and it’s dangerous too,” said a resident.

The damage is so bad, parts of the road converted from pavement back to dirt. Local leaders say horse and buggies used by this local Amish community play a big role in the destruction.

“We spend too much money on our roads to have steel wheels and carbide-tipped wheels tearing them up,” said Michigan Sen. Mike Shirkey, R- Clark Lake.

The Branch County Farm Bureau passed onto the state a resolution, which recommends:

…annual licensing of horse drawn vehicles used mainly on public roads and require each buggy to be marked with reflective devices making our roadways safer for all involved.


The resolution also urges that rubber shoes and wheels be required for all horses and vehicles.

Over the past year, the state has seen at least two serious accidents, one of which resulted in the deaths of three children. 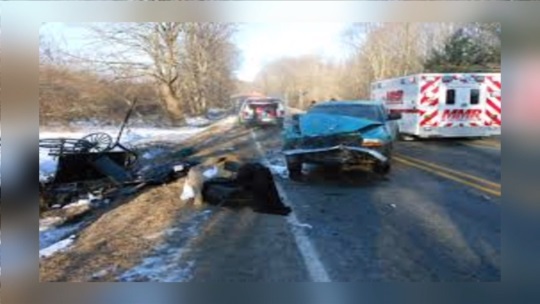 Shirkey says that the resolution emerged after talks with bishops in Branch and next-door Hillsdale County had “staled.”

The goal here is to get a statewide law passed along the lines of those regulating buggies in other states like Pennsylvania and Indiana.

The Amish settlements of Branch County are not all the same, as I detailed in this post following my visit to the county in 2011.

The people in California Township are from a Swiss Amish background, but very plain. In fact, I did not even spot Slow-Moving Vehicle triangles on their buggies while there, which would make them one of the few outside the Swartzentruber Amish not to use them. The properties and other visual markers also resemble the Swartzentruber Amish as you can see in this shot from my visit: 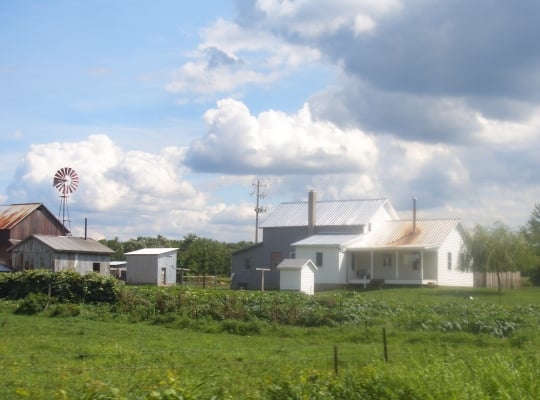 The Amish in the Quincy settlement in the north end of the county are less plain, with buggies having lighting and safety markings. However it seems that they are also considered culprits here as the Quincy area is noted in the piece.

I’d suspect the proximity of the nearby Lagrange settlement has had some influence on this move. These Amish there drive among the best-lit of all buggies, and are quite integrated with the local non-Amish community. They are also among the few Amish nationwide whose buggies carry license plates, a source of revenue for the local government.

Casting their eyes south at the Amish driving licensed, well-illuminated carriages which are not only ostensibly safer but also a sense of revenue, and you can imagine the people in charge in Branch County seeing them as a model of how things could be.

However that would require the Amish to go along with the change. You’re essentially weighing the pain and cost of moving against the added financial cost and, more importantly, moral dilemma of accepting change brought upon you from outside.

I imagine some of Branch County’s Amish might find that tradeoff stomach-able, while others might not. One reader in the know described the plain California Township group as particularly insular.

Here’s the video report from WWMT: