Mary Ann Kinsinger grew up Amish in Somerset County, Pennsylvania.  Mary Ann has teamed with Suzanne Woods Fisher on a series of children’s books, the first of which is called Life with Lily.  The four-book series is based in part on her Amish childhood.

I’m not the target market for this series, but it looks like a wholesome and fun read if you have children.  Given the popularity of Amish-themed books with adults, I’ve wondered why there weren’t more aimed towards that age range (or maybe there are, and I’ve just missed them).

I thought this might be a nice chance to ask Mary Ann a little bit about her Amish upbringing, and Suzanne about how this collaboration came to be.  The interview below hits on those topics and a few others.

A few thoughts on Amish children

The topic of Amish children is one that evokes extremes.  Amish children are portrayed or seen, often enough, as impeccably-behaved angels living idyllic lives.  On the other end of the spectrum we’ve seen former Amish sharing their difficult upbringings, challenging the idea that an Amish childhood is by definition peaceful and plum.   Practices typical to Amish also run against current trends.  Spanking, common in Amish homes, evokes a lot of criticism today, certainly more than it would have one or two generations back.

I think the rosy impression of the Amish upbringing is more common.  I definitely had that early on (probably still do, somewhat).  What most sticks out from book-selling days were the numerous times when Amish children would sit around the table, wide-eyed and silent, as I would run through a book demo and speak with the parents.  Interruptions were few or nil.  English homes I visited were often different in that regard.  However I realize that the volume level of children over a 20-minute period is a pretty thin basis upon which to draw sweeping conclusions.

Later I saw that kids will be kids, and of course every family is different.  I will say that, on balance, I think that if you’re born Amish you probably have a better chance to be exposed to an upbuilding environment than the average non-Amish child does.  You’re at least more likely to have both parents in the home. 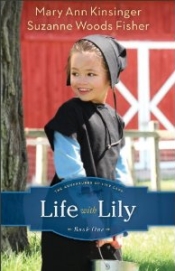 We also have a 3-book Life with Lily giveaway for Amish America readers.  To enter, just leave a comment on this post.  I will select 3 names at random and post the winners in a week’s time.  Now on to the interview, and thanks to Suzanne and Mary Ann for taking the time.

Amish America: Mary Ann, can you share a little on your background and upbringing?

Mary Ann Kinsinger: I was born and raised Old Order Amish. My parents moved from a small Amish community in New York to Somerset County when I was only a few weeks shy of my 8th birthday.

Every Amish church has their own set of rules and guidelines they go by so you always expect to make changes when moving. Moving to Somerset required a lot of changes for our family. All our clothes needed to be changed. Dresses had to have their pleats sewed and ironed a certain way, apron belts had to be a certain width, shirts had to have no more than seven buttons total counting the ones on the sleeves and collar, shawls that were worn by women during cold weather were folded in a triangle shape instead of rectangle like most other Amish churches, our prayer coverings were made differently and the bonnets to wear over the coverings when ever we left home were made with narrow slats tucked inside fabric which made that they could be folded.

All the clothing changes didn’t really faze me at that age. There were bigger changes that I noticed a lot more. In Somerset County, we attended church in a meeting house instead of homes and there were no fellowship meals served afterwards. I really missed that special church peanut butter.

Another change occurred when my Dad bought a little tractor to use around our farmette. Somerset Amish use tractors for farming for everything—except planting corn for which they still use horses.

A change I didn’t like was that refrigerators weren’t permitted to be kept in kitchens. For a long while, our refrigerator was out on the front porch. We all rejoiced when Dad built an addition to the house and the refrigerator was moved inside to a pantry.

How does an Amish upbringing compare with a non-Amish one?

Mary Ann: I can only speak from my own experience of growing up in an Amish family and how it compared to some of my friends who weren’t Amish. I think we both felt a little sorry for each other. They felt sorry for me because they thought I was “deprived” of most modern conveniences. I couldn’t watch TV or listen to music. But I felt sorry for them! How awful life would be to have to wear shoes every single day, to not be free to run and explore the countryside, or to experience the joys of working with my parents. As a child, I couldn’t wrap my mind around the fact that one friend was not allowed to help her mother prepare meals. And she had hardly any chores!

Basically, it all depends on what kind of non-Amish families I would choose to do my comparison.  Some of my best friends came from a non-plain background and as far as I could tell, the only differences that caught my attention was that they addressed everyone as Mr. and Mrs. and they spoke freely about more spiritual things.

I have noticed how in some families everyone seems to focus on their own thing—hobbies or interests or television or computers—instead of being more family-oriented like the Amish.

I’ve heard non-Amish, briefly encountering well-mannered Amish kids, describe them as “perfect angels” and in similarly glowing terms. What do you think of that description?

Mary Ann: Children are children where ever you go. How well-mannered they happen to be is much more of a reflection of the parenting they have received than whether or not they are Amish.

Some of the most well-mannered children I have ever met had no connections to the Amish at all. And I have already experienced having some Amish children visiting at our house and being enough of a terror that made me vow to never invite them back. Most Amish children fit somewhere between those two examples.

How “Amish” are you raising your own children?

Mary Ann: We are not focused on trying to raise our children on anything other than being Christ-centered. A few things we have retained from when we were Amish that we are teaching our children is observing Sunday as a day of rest with preparations beginning on Saturdays to make that we don’t have much to do on a Sunday. Like preparing food, laying out the clothes we will be wearing, and making sure that the house is in order so we won’t have any cleaning chores to do on Sundays. We still believe in the core values of the Amish culture. Family, faith, forgiveness.

Have you seen the new television show on TLC, called “Breaking Amish,” and what is your opinion of it?

Mary Ann: I have seen it. To sum it up in one word: “Fake!”  Their reactions to things when they reached NYC reminded me of when my brothers and I were still little children. We used to enjoy a game where we pretended we were pioneers and visited our house and acted in awe over every little thing. Amish are not nearly as challenged in the outside world as those cast members tried to pretend.

The cast members had all left the Amish years ago. They’re pretending to be leaving now to go experience the English world. There were so many scenes that proved how scripted everything was. Here’s a few examples: There was a scene in Ohio when Jeremiah was talking about how the bishop’s wife was watching him. Then they showed her and she was wearing Lancaster clothes.

The boys didn’t have Amish haircuts at the beginning of the show. When the girls let their hair down, you could see their hair had already been cut. Amish women have long, long hair.

I don’t think that show portrays how it is to be Amish in any sense, or even how it is to leave the Amish. When all is said and done, they’re just actors playing scenes.

How did you get the idea for this series and the two of you come to collaborate?

Suzanne Woods Fisher: Life with Lily is the first in the ‘Adventures of Lily Lapp’ series for children, ages 8-12. Mary Ann recently left the Amish church—a painful separation for her family—and started a blog to capture her happy memories for her children. Very shortly, her blog (ajoyfulchaos.blogspot.com) was receiving 30,000 hits a month. And then…the New York Times noted it in an article.

In the meantime, Mary Ann and I had developed a friendship through my own books about the Old Order Amish. She asked me to collaborate with her, so we pitched a series proposal to my publisher, Revell, who happily accepted.

Suzanne:  For this age group, we created each chapter to have its own story arc because that’s how children read. There is an overriding story arc, but it’s not quite the same as an adult novel—with building suspense that reaches a crescendo. Also, the vocabulary is aimed for 8-12 year olds. My editor even has a software program that checks reading level of vocabulary. Happily, we passed!

What do you hope readers take away from the Lily books?

Suzanne: Here’s what drew me to collaborating with Mary Ann: her memories reflect a warm, happy Amish childhood with fully dimensional characters. Nothing saccharine, nothing severe. The Amish are part of America—a unique culture living right in the midst of a busy, modern world…and thriving.

The ‘Lily’ series invites readers to peek in the window of a delightful Amish family. I think there are many layers to enjoy about the Lily stories—the top layer is getting to know a funny little girl. But there are deeper layers, such as seeing how Lily’s wise parents handled difficult situations (wait until you meet Teacher Katie. Hooboy!).

By the way—we want to invite your readers to check out the interactive website for children that our publisher, Revell, created to complement the ‘Lily’ series: www.adventuresoflilylapp.com. Coloring pages can be downloaded, Mama’s recipes are shared, there are games and crossword puzzles, and readers can ask Lily a question. Hope you’ll all drop by!

Thanks, Erik, for letting us visit your blog. And thanks, readers, for your interest in Life with Lily.