My new favorite soup?  Cheeseburger.  To the extent that you can call it soup. So thick it’s really a stew.  Or let’s cut to the chase, this is basically a liquefied cheeseburger.  Had a rib-sticking bowl last week at my Amish hosts’ table.  By the way, is this an “Amish soup”?  What makes something an “Amish soup” for that matter?  Perhaps its fat content? 🙂

Ohio Amish Library  Finally visited this place after hearing of it for some time.  The book and document collection is located in the bottom of a nondescript building just outside Berlin.  It’s not a huge place, but one I could spend no small amount of time in, I suspect.  It made me realize, again, how short our time is compared to how much there is to be read.

Crossing the Border Following some discussion on border transit requirements for Plain People, Linda directs me to this information from the Amtrak website, under “Documents required to cross the US-Canadian border”:

Amish and Mennonite Old Order only:
– copy of birth certificate, and
– signed copy of IRS form 4029, application for exemption from Social Security and Medicare taxes and waiver of benefits.

Are Amish and Mennonites crossing the US-Mexican border treated in the same way?

Trains  Speaking of Amtrak, or rather “Amishtrak“, I spent a day with an old-timer last weekend in Ohio who described how trains were a part of travel at one time in Holmes County.  Belle Center, I learned, once had a station too, though that may have been pre-Amish.  Trains are generally handy for Amish to have around.  But Amish in Montana maybe don’t think so.

Amish TV  One unofficial report has it that Breaking Amish has a new season in the works, with some filming slated for Sarasota.  Amish Mafia apparently makes its next appearance in March.  Ira Wagler gives a thoughtful take on the latter program.

Beard-cutting appeals  So far 10 convicted in the beard cutting trial have filed appeals.

Voice recording  A reader writes with a question: “have you heard that the reason that Old Order Amish people will refuse to be recorded in an interview is because they think of a recording as a ‘photograph of the voice’?”

For what it’s worth, my experience has been that voice recording is not much of an issue.  This was the case with the several dozen Amish business owners interviewed for my first book, at least.  I don’t recall that anyone refused.  The implicit understanding was that these interviews were not to be played publicly, however (though I don’t know how many would have really cared if they were).

Also the people I interviewed were mostly of “mainline” groups and not of the highly conservative churches.  I can think of a number of productions featuring recorded Amish voices, such as the PBS Amish film, or Burton Buller’s documentaries.  Though I could hear objections from more traditional Amish in particular.

Bonnets will travel Notice in a recent Ohio Gemeinde Register: “Check your bonnets. The one I have is marked E.W.Y. Call 330…”.  Below this you find a similar notice for a “thick, black  denim coat” leaft behind at church. Even with initials, how often do clothes items go home with the wrong owner?

Music Village USA  Taken in the lesser-traveled western half of Holmes County. Population 197: 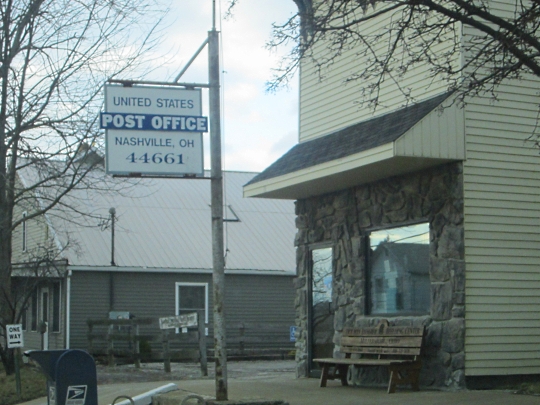