The Amish are well-known for not attending higher institutions of learning. That noted, the business I want to share with you today might be the closest thing in America to an “on-campus” Amish operation. 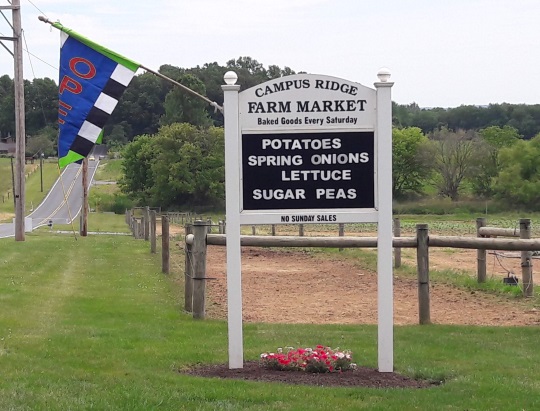 But first, a brief recap – I’ve just returned home after the better part of a week on an Amish trip. The centerpiece was attending the Health & Well-Being in Amish Society Conference at Elizabethtown College.

Along the way I also enjoyed many other visits and events in a fully-packed week, including attending Amish church, a youth singing, a backyard open fire cookout, visits with many friends, and a visit to another Virginia community (a rapidly-growing Lancaster daughter, or “sister”, settlement).

More on all that to come, as I settle back into having public electricity and an easily-accessible laptop after a week staying in Amish homes. In the meantime I wanted to share with you this little business I dropped by post-conference. 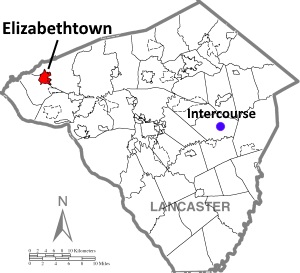 In recent years Amish have begun moving into the western part of Lancaster County, into the Elizabethtown area where previously few had lived. One of those families has begun inhabiting a farm very near the Young Center.

This is easily the closest Amish place to the Center, just a stone’s throw up the road. It’s practically in town, as it sits on the edge of a neighborhood and the campus, on farmland which, if I’m not mistaken, had previously been slated to be developed as well. You can see the farmland I’m talking about as well as another neighborhood not far down the road in this photo: 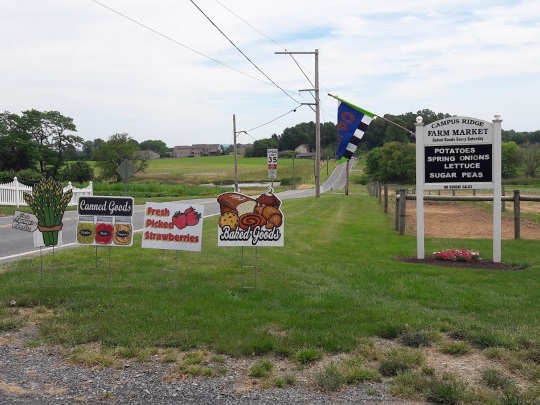 I remember driving past this farm daily when I was a fellow at Elizabethtown College in the summer of 2008. At that time I believe this was a tree farm, not owned by Amish. The Amish family living there now have a farm market as well as a greenhouse.

The farm market is perfectly-named in my opinion as the Campus Ridge Farm Market. On-campus students without cars could easily walk here (minding the road of course, as there is no sidewalk).

I stopped in right after the conference closed on Saturday, on my way back to Amish friends in the more-heavily-Amish eastern side of the county. There were a couple of customers there already, and the stand was being run by an Amish girl accompanied by her younger brother.

The market is located in an uncommon but pleasant location, inside the barn. Usually these types of businesses are in their own stand-alone buildings or other non-dairy-barn structures. 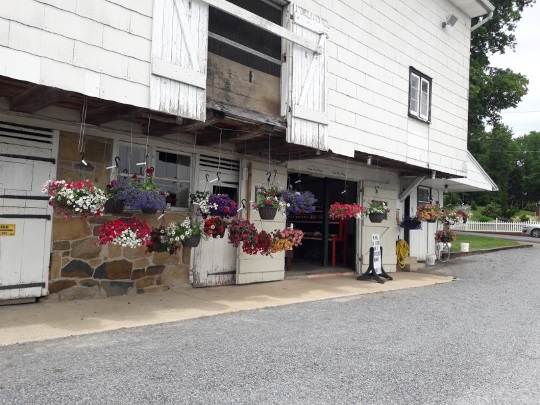 Pentecost Monday was just around the corner (aka “Whit Monday”), which is a holiday Amish observe by closing businesses and visiting family and friends. The sign let customers know what to expect: 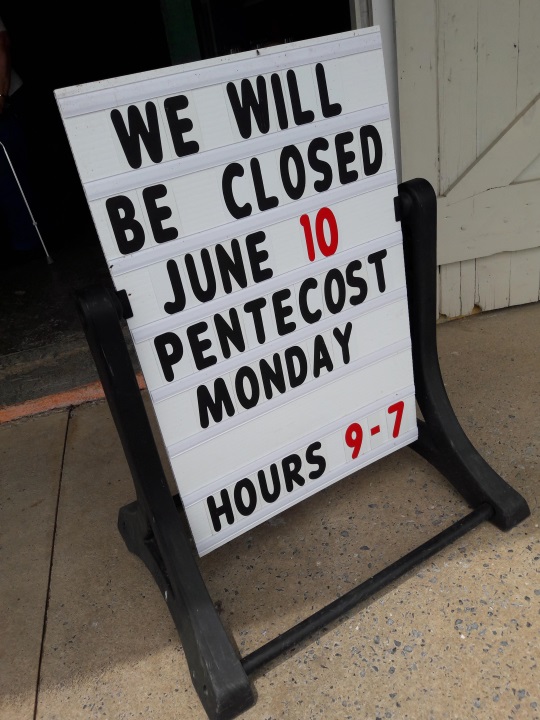 There was a nice selection of canned goods, baked goods, and fresh produce. There were also some hanging baskets for sale. 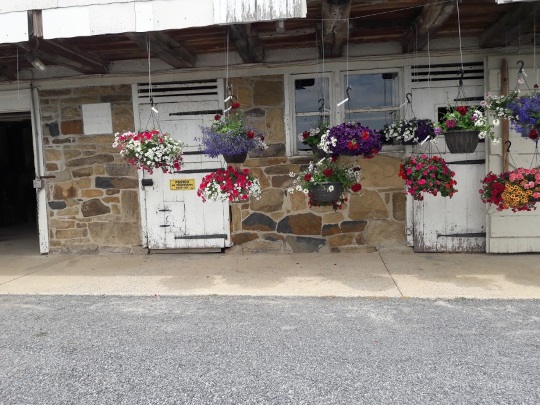 The greenhouses behind the barn: 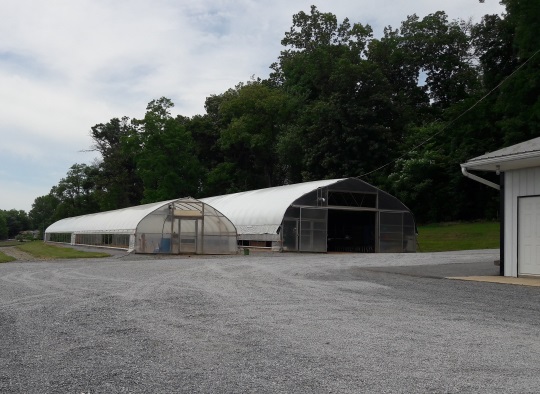 Once inside, I soon settled upon my usual purchase of baked goods, shunning the healthier and arguably wiser choices of say a basket of tomatoes or kale.

Actually, I’m not even sure they had those things, as I usually gravitate to the baked goods and canned items and the produce can get a bit ignored. Though I can say there seemed to be a nice selection of fruits and vegetables present in the market. I can say they definitely had strawberries, and had some shortcake for sale right next to them.

The first thing that caught my eye in the baked goods section were the cinnamon sticks. These had an interesting cream cheese filling: 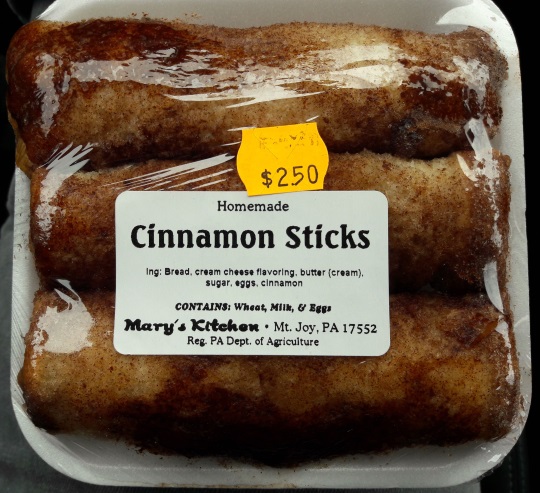 The other thing I picked up was apple bread. A single loaf remained positioned next to several banana breads. I’d never had apple bread, I explained at the counter. The girl told me it was similar to banana bread. 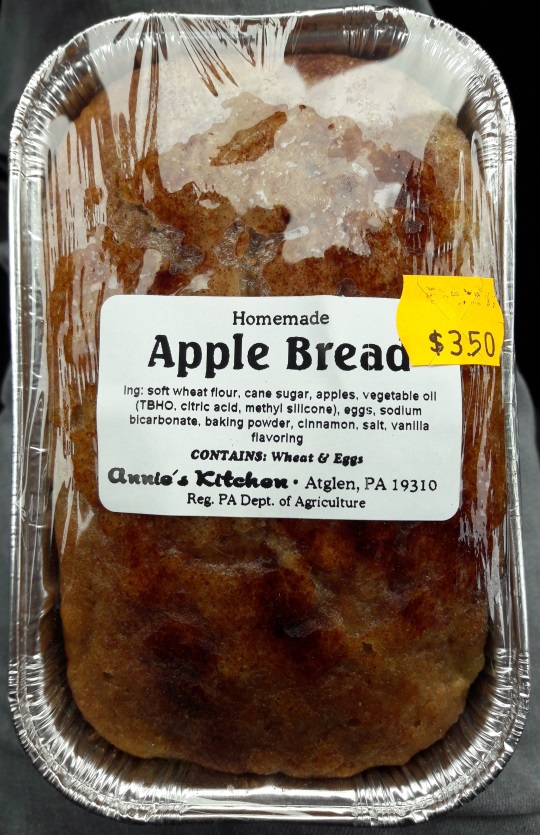 As you can see, these are baked in two separate locations – one in the nearby Mt. Joy area – Mary’s Kitchen – the other at Atglen – Annie’s Kitchen. By the names and labeling, it looks like they might be associated with one another.

If you go to visit the Amish in Lancaster County, this is unlikely to be your first destination, as it lies about a half-hour away from the popular heart of the community centered around the Intercourse – Bird-in-Hand – Strasburg triangle.

However if you would like to venture beyond the core of the settlement and perhaps pay a visit to the Young Center, it’s well worth dropping by this little place.

Here are the details: 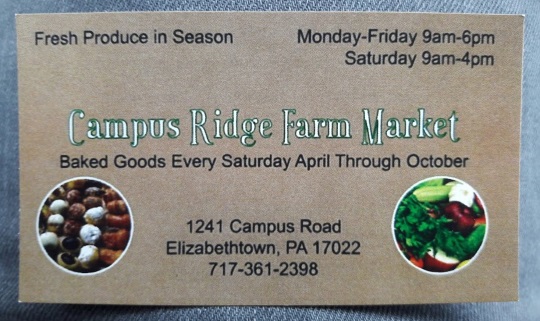 As for the hours, looking at two different sources, I am not 100% sure what is accurate. The card above says that the business is open Monday – Friday from 9am to 6pm, and Saturday from 9am to 4pm.

However, the Pentecost Monday sign above tells us “Hours 9-7”. So use those two pieces of info to make your decision on when to go.