Buggies off the road?

29-year-old Eli Borntrager was killed on the road last year in Missouri.   Borntrager’s buggy was rear-ended by a driver traveling at 70 mph.

The Amish buggy is not the safest form of transport.  For many reasons. 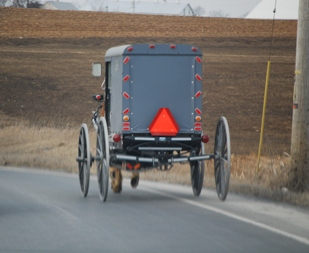 Buggies can be difficult to see.  Horses can spook.  With their long bodies and front-set position, horses create a tougher sight angle when attempting to cross an intersection.  They also lack the acceleration “punch” of a car.

Carriage construction, compared to that of a motor vehicle, is flimsy at best.  Buggies lack a means of restraint and impact absorption capacity.  One buggy safety study noted that “the buggy design will eject the passengers from the cabin when struck in most positions.”

Some communities, of course, are more dangerous than others.  Lancaster is packed with traffic.  Holmes County’s winding roads and steep hills create visibility hazards.  In contrast, a place like Arthur, Illinois has relatively low automobile traffic, few curves and flat terrain. 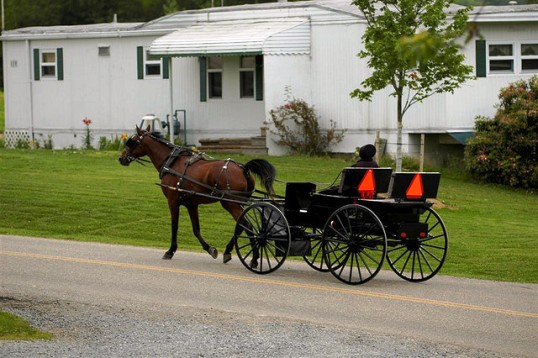 Buggy safety is enhanced by use of reflectors

Both Amish and highway authorities take precautions.  Amish in Lagrange County, Indiana enjoy a full lane-sized shoulder on larger highways in the community.  You sometimes see dirt lanes cut through a piece of farmland, bypassing a dangerous part of the road.  Or a buggy pull-over lane, like in the hilly Munfordville, Kentucky Amish community.  And all Amish buggies use forms of lighting and/or reflectors.  Most are fairly-to-very-well lit-up (though not all).

Amish, of course, aren’t the only ones at risk on the road.  Nor are they always faultless in accidents.  One study found buggy driver error to account for a number of crashes.  This typically occurred when an Amish driver crossed an intersection at an unsafe time. 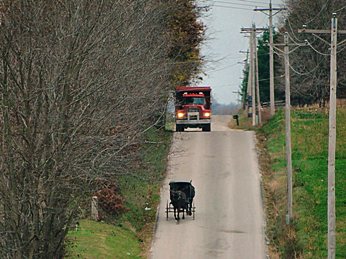 Non-Amish have been injured or killed.  Last June, a 91-year-old man walked out of a restaurant and was fatally struck by a horse-drawn cart (in, as it happens, Arthur, Illinois).  In response, a writer for a St. Louis paper claimed “the only logical conclusion” to be that “the Amish need to keep their horse-drawn buggies off the road”.

Yet motor vehicle driver behavior likely plays a much bigger role in accidents.  High speeds and alcohol are often found to be contributing factors, as is “following too close”.  And modern technology may only complicate things further.  It’s possible the driver who struck Eli Borntrager was texting at the time.