“Pud” Sam Stoltzfus is a retired Amish farmer and gazebo builder known throughout the Lancaster County community for his outspoken nature. He has been a frequent writer of letters to the local Lancaster paper, an impromptu spokesman for the Amish in some sense. If you get a chance to meet him, you probably won’t forget it. Pud Sam is a historian, grandfather to 51, and horseradish seller to boot. 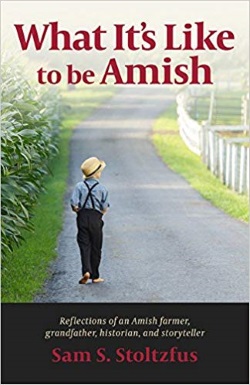 Recently I picked up a copy of Pud Sam’s new book What It’s Like to Be Amish: Reflections of an Amish Farmer, Grandfather, Historian and Storyteller

. I was happy to see that he has put his thoughts into book form, and judging by the chapter titles there are a lot of interesting topics.

While I haven’t dug in too deep yet (stay tuned for more when I do), Lancaster Online’s Scribbler Jack Brubaker has written a bit on his book, and the story of supervised youth groups in Lancaster County, which Sam details.

Supervised youth activities were once not the norm in Lancaster County. But a dramatic event in 1998 set the community on a different course.

In What It’s Like to Be Amish, Pud Sam gives a history of these groups since their founding from a time of scandal. Here’s the Scribbler’s summary:

Rowdy Amish teens have caused problems during Rumspringa. Following a highly publicized but limited episode of drug dealing in 1998, two Amish bishops joined parents in discussing whether gatherings of teenagers should be supervised. That was the beginning of the first authorized Amish youth groups in Lancaster County.

In early 1999, Amish bishops and parents approved and printed guidelines for a new youth group called the Eagles, according to Stoltzfus. Some parents thought their teens should dress more conservatively than Eagles and developed their own group called the Hummingbirds.

Both groups abandoned Saturday evening gatherings and embraced religious singing at Sunday evening events, which had to end at 10.

However, some parents thought this approach was not conservative enough and, in 2002, began a third group called the Parakeets.

Hundreds of Amish teens joined these three groups, which later split into smaller groups. All of the groups used the same basic guidelines, with adult supervision.

Some Amish teens remained outside the supervised groups and formed their own, more “worldly” groups, but they are not Stoltzfus’ focus. The supervised groups had their own problems, he writes: “In the more liberal groups, cellphones and various electronic devices were creeping in. Although the rules forbade overnight gatherings … such gatherings sometimes took place.”

Friction continues with dress codes and the question of open versus closed buggies.

In the book, Sam notes several guidelines created for these groups to set them apart from the previous norm:

I have had a chance to attend several of these singings in Lancaster County. Here is my full account of a Parakeets singing, and here’s a brief comparison showing differences with an Eagles singing.

I don’t know about that “no outside activities” stipulation above; nowadays at these singings games like volleyball are typically played.

Here’s the part where I point out the differences:

This singing was rather different from others I’d attended of the more traditional Parakeets youth group. Singing was closer to an hour and fifteen minutes (though I’m told it’s usually about an hour and a half) versus two hours in the Parakeets’ case. Singing was also faster and done in four parts; the Ausbund was used along with a second hymnbook, though English choruses were often inserted. This group was a good bit chattier during the singing as well.

The Eagles, at least at the time, were the largest group, with seven sub-groups.

As the groups have grown, they have divided, and in some cases, completely new groups have been formed. Not everyone agrees with how the groups are to be run.

But they provide Amish youth a healthy venue to gather, and as Sam notes at the beginning of the chapter, even since the earliest days of the Amish “there have been youth groups and a system for finding marriage partners within the Amish community.”

The supervised groups are an imperfect solution, but I think many Amish parents would agree with Sam when he concludes that “the time, effort, and prayers put into starting and maintaining supervised youth groups has been a good investment for our future Old Order Amish churches.”