We arrived at my friends’ farm home as the sun was going down, right in the middle of a full-bore canning operation.  I could tell they had been busy that day.

Dozens of jars filled with chopped chicken occupied the kitchen table, while the canner hummed away on the stove.

I felt fortunate to arrive after the start of the process, which was really just as much an end–for the chickens.

Or we could see things more positively, and call it a transition to a “better place”–first a Mason jar, then the hungry stomachs of this family of six, destined to power them through another winter. 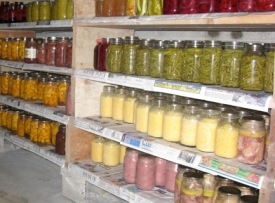 A well-stocked Amish larder (photos by Tom in NY)

Amish can various meats to stock their larders, including chicken, pork, turkey, and beef.

I had some friends from North Carolina along on this visit, their first to an Amish home, and took one into the basement to view the spoils of the family garden and farm.

The shelves were about two-thirds full, loaded with vegetables, meats, juices, and who knows what else, by the looks of some mysterious jars.

On the basement sink, rows of golden peaches rested next to jars of zesty relish. This family makes good use of their garden, and also cans foods acquired elsewhere, such as the peaches.

You always want to make yourself handy when Amish bodies are moving, which my friends and I were able to do in two ways. The first, screwing on the lids of the yet-to-be-heated Mason jars, was easy enough.

The second presented more of a challenge and a slight health hazard as well. I was tasked with extracting the super-heated jars of chicken soup from the canner, a simple rectangular steel container with a lid.

To do so I was given a tonged device, one end coated in a white rubber, the other in a brown plastic. Grabbing the tongs by their handles, I proceeded to carefully grip and lift the chicken jars out of the scalding water, and place them on a towel on the counter. 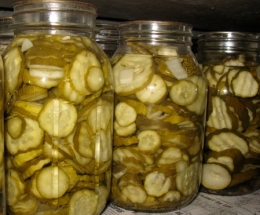 Canning gets me in a pickle

As I removed them I watched as the liquid inside each jar bubbled furiously as the chicken continued to cook within.

However, the tongs, I found, were tricky to maneuver; jars wiggled and slid in their grip, threatening to plunge back into their heat bath with a searing splash in store for me.

One did just that, in fact, though I managed to avoid injury. Happily, I was able to awkwardly remove all the twenty or so cans with no burns of any degree.

The next day, I walked into the kitchen and noticed the man of the house lending a hand to his pregnant wife by performing the same task on a fresh batch of jars. Yet something seemed odd. He was holding the tongs upside down!

But how easily he lifted the chicken, with no threat of slipping, each jar held firm in the rubbery grip of the white coated end. Yes, now you know I was holding the things upside down.  I’ll take my bow now.

Later that day we sliced celery for “Numbers Soup”, a type of vegetable soup which also includes potatoes and beans. Apparently I know how knives work better than I do canning tongs, for the celery presented little trouble. With three blades blazing we made quick work of the pile.

Here are some more Amish canning photos, and some canning recipes.  Do you like to can goods?   Or just eat them?