Do the Amish care about politics?

With the races for the presidential nominations heating up, seems you can’t turn around without hearing what so-and-so said about you-know-who, who’s waffling, flip-flopping or what-not.  Just 12 more months of it to go.

So what do the Amish think about the political process?

Well I can’t speak for all of them, but it seems to me that there are some closet political junkies among the Amish out there.  I’ve been listening to interviews with Amish business owners I did in September for an upcoming book, and on more than one occasion our conversational digressions led into the political sphere. 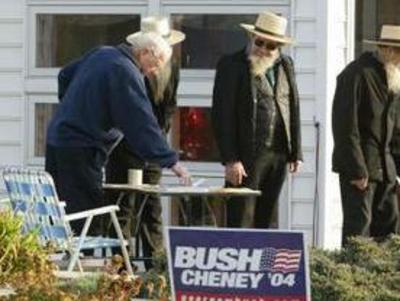 If the Amish were more politically active, it’s probably fair to say that most would lean Republican, despite the current administration’s stance on war.  Bush famously went after ‘the Amish vote’ in 2004 in both Ohio and Pennsylvania, with a number of Amish responding enthusiastically.  Generally, Amish do not vote, and if they do, it’s usually for local office.  It would be extremely rare for them to hold any sort of political office themselves.

Social issues such as abortion and religion factor into the conservative lean.

Some Amish get their fix of politics through right-wing radio.  One of my acquaintances listens to Rush Limbaugh and Glenn Beck when he’s on the road, though he says he finds Sean Hannity a bit too liberal for his tastes.

One thing’s for certain, there won’t be many Clinton votes among the few that may be cast by the Amish in ’08.  In the words of one Ohio Amishman, currently pulling for Romney:  ‘Old Hillary…I just can’t find myself clapping for anything Hillary does.’

More on the Amish and voting.