There are a number of things I’ve wanted to post about, and since tomorrow I shove off for a 9-day visit to Pennsylvania (where the kero-net can be a little sketchy), I wanted to make sure I got them in today.  So here goes, some links, news, and thoughts:

Step into a visitor’s shoes for a play-by-play account of a visit to the Dover, Delaware Amish community, and the sleep-inducing power of horse’s rear ends.

I picked up some pies recently at Shady Maple, a well-known (and colossal) eating establishment in East Earl in Lancaster County.   Gauging the crowds and lines, I’ve never had the courage to do more than buy occasional items to-go here.  Abe and Sarah and I once tried to visit for dinner but the general vibe of the place scared us all off to the Oregon Dairy instead.  Anyone been to Shady Maple?

For anyone within range of Elizabethtown College, I’ll be giving a talk on the Amish entrepreneur this Thursday, April 15th at 730 pm at the Young Center’s Bucher Meetinghouse.  The Lancaster Sunday News ran a nice review of my book (no longer online) and an announcement of the talk yesterday. 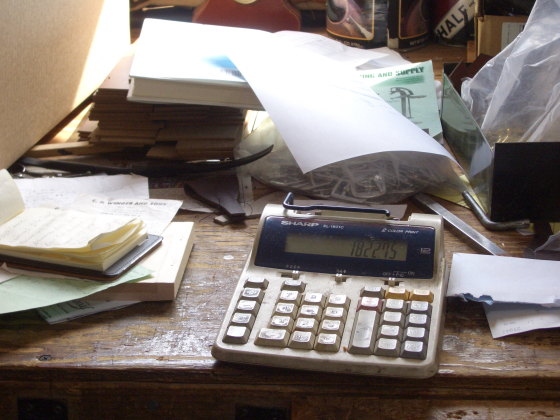 Calculator in an Amish shop

Taxing times call for extraordinary measures.  Which is why I’m filing an extension on my taxes this year.  Not that they’re particularly difficult, but I need to access some paperwork in Poland which I haven’t yet been able to do.  One of the myths concerning Amish is that they do not pay taxes.

They do, and like any other true-blooded Americans, they also complain about paying them, especially property taxes, which, with large acreage, can be high.  They do not participate in Social Security, however, which they view as a form of insurance.  Brad examines this issue, one which I touched on in a post on the Amish and health insurance.

And in one bit of non-Amish commentary:  as some readers might know, I reside in Poland for part of the year and am a citizen of Poland as well as America.  This Saturday’s air disaster in which the Polish president was killed along with his wife and dozens of other leaders including the head of the national bank and the army was the country’s worst since World War II.

To make an analogy, I’d heard it compared to the hypothetical situation of the US losing its vice-president (the Polish president, while holding an important position, wields less power than the prime minister, and maintains some symbolic duties) along with numerous government Department heads, all in one fell swoop.

I appreciate the comments from well-wishers and as something of a naturalized Pole am probably not as impacted as a born-and-bred citizen of Poland would be.  Nonetheless, it was a shock and an event which gave me an oddly chilling emotional reminder of the terrorist attacks of September 11.  Not that terrorism was involved here, but in the sense of loss and disaster of the day.

I shared the news with Abe in Lancaster when we spoke on Saturday on the phone.  He had not heard yet.  We discussed how even though this kind of disaster is not like losing a member of the family or person you know, if does affect people on a certain level.

True to form Abe gave me typically wise counsel:  you never know when the last time you’ll see a person will be.  So always make sure you take the time–even when you think you don’t have the time.  I thought this a worthwhile something to keep in mind.