As mentioned a few weeks ago, food ethnographer William Woys Weaver has written a new book entitled As American as Shoofly Pie: The  Foodlore and Fakelore of Pennsylvania Dutch Cuisine. 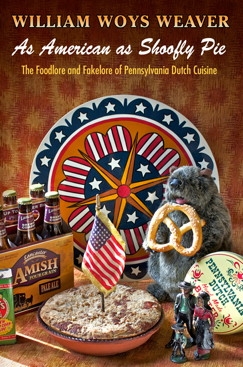 I recently asked Dr. Weaver ten questions about his book, the Pennsylvania Dutch, and their cuisine, which you’ll find below.  I found his answers very interesting and I hope you do too.

Amish America: Who are the Pennsylvania Dutch?

William Woys Weaver:  The Pennsylvania Dutch represent an American regional culture that evolved out of an amalgamation of German-speaking peoples who emigrated for the most part from Southwest Germany and Switzerland. About one third of this group came from Swabia in Wurttemberg, another third from the Rheinland-Pfalz, and another third from Switzerland, including the plain sects affiliated with the Mennonites and Amish. While divisions according to religious affiliation still persist, in particular setting apart the plain sects from the rest, certain shared cultural practices are shared by all of the Dutch, especially language, and foodways.

While many people today imagine that the term Pennsylvania Dutch applies only to the Amish and similar plain sects, in fact the moniker applies to the whole group and was used since colonial times to designate both the people and their language. The use of the word “Dutch” for German-speaking people traces to medieval English. At one time 40 percent of the Pennsylvania population spoke Pennsylvania Dutch, but due to cultural and linguistic suppression by the state via the public school system during the period 1850-1930, the numbers of dialect speakers now represent only several hundred thousand.

What characterizes their cuisine?

Pennsylvania Dutch cuisine is a hybridized style of cooking drawing on the cultural roots of Southwest Germany reinvented with American ingredients and new modes of preparation. Each county within the Pennsylvania Dutch part of Pennsylvania has its own distinctive dishes, thus the cuisine is highly regionalized and richly varied.

However, certain key features can be found throughout the Dutch Country: hundreds of sauerkraut dishes, a preference for egg pasta (noodles, dumplings, pocket dumplings), elaborate soups, a distinctive charcouterie based on pork, and a wide range of shallow dish and deep dish casseroles. There are also quite a few icon foods, such as chicken-and-waffles, shoofly pie, pretzels, scrapple (Panhas), and a vast array of Christmas dessert foods (cookies, cakes, honey cakes, gingerbread, etc).

Which foods presented today as Pennsylvania Dutch are really not anything of the sort?

There are quite a few foods sold today which are labeled Pennsylvania Dutch, but which in fact the Dutch did not invent. Among these are chow-chow (mixed vegetable pickle which originated in India), chicken pot pie (an Anglo-American dish), cracker pudding (a common Victorian poverty food), and the so-called seven sweets and seven sours, a condiment combination invented for tourists at the Valley House Hotel in Skippack, Pa during the early part of the 1900s. More recently, since the 1960s, many foods are labeled “Amish” as a marketing ploy to convey the idea of home-made, pure, farm-raised, or natural. Much of this is false advertising.

Traditional Pennsylvania Dutch cookery existed in two basic spheres up to Prohibition: home cookery (where the core cuisine still exists today), and a more upper-class style of fare in hotels and country inns. Prohibition more or less killed off the upper-class cookery, a fact much lamented during the 1930s, and Lancaster County tourism reinvented the home-style cooking during the late 1930s to fit marketing ideas about the “Amish Table.”

This reinvented fare consisted of Schnitz-un-Gnepp (sliced dried apples cooked with dumplings), chicken pot pie, seven sweets and seven sours, and the basic format of platter-style service found in diners. Dumpling cookery gave way to baked bread filling, which could be served in scoops. Stuffed pigs stomach, which when properly made is sliced like a sausage, was reinvented as a stewy casserole, easier to serve and cheaper to make. What eventually evolved was the “all you can eat” type of fare now sold in family style restaurants. Very little of this food is locally grown or prepared in a traditional manner, although advertising would have us believe otherwise. Shady Maple in Lancaster County is an example of this: industrial food produced on an industrial scale. The ethics of food origin are not even mentioned.

I prefer the old term Pennsylvania Dutch as opposed to Pennsylvania German for several reasons. First, the Pennsylvania Dutch ceased to be Germans as soon as they set foot in Pennsylvania, furthermore, they did not think of themselves as Germans when they left the Old World, they were Hessians, or Palatines, or Swabian, their cultural identity was keyed to their place of origin not to the nineteenth-century Germany that took shape in the 1870s. Also, Pennsylvania German does not fit all people, like myself, since my ancestors were Swiss.

Pennsylvania Dutch is the historical term used by the common Dutchman for his cultural identity and for his language. Phoebe Gibbons used that term in her famous 1869 essays on the Pennsylvania Dutch, and Samuel Haldeman used the term Pennsylvania Dutch for both the people and their language in his classic linguistic study called Pennsylvania Dutch in 1872. Haldeman was internationally known for his work but because he converted to Roman Catholicism, the founders of the Pennsylvania German Society (1891) dismissed him and his scholarship and chose the term Pennsylvania German in imitation of the Deutsche Gellsellschaft in Philadelphia (an immigrant society), with clear emphasis on the term German both in the sense that this denoted a lingering connection with Old World Germany (pro-German sentiments) and the genealogical/racial purity of the ancestry of the group’s members. To get in it was necessary to prove Pennsylvania ancestry prior to 1808 on both sides, and perhaps more important, to be a person of high social standing.

Who are the “Buckwheat Dutch”?

Buckwheat Dutch is a euphemism for the poor Pennsylvania Dutch who lived mostly on marginal farmland raised buckwheat as their main cash crop. This term is relatively old, and was recorded as late as 1958 in Centre County, Pennsylvania.

Where can one find authentic Pennsylvania Dutch cuisine today?

Authentic Pennsylvania Dutch cuisine is found mostly in private homes today, the one-pot meals, the traditional meats, the dumplings, none of this has been successfully translated into a style of restaurant cookery that would appeal to modern foodies, although it is quite possible that we shall see a large change shortly, since there are young chefs who want to revive or reinvent the old culinary traditions. I wrote my book partly to act as a guide so that these young chefs would have both a sense of historical perspective and a sense of the range of dishes available to New Dutch Cuisine.

Which traditional Pennsylvania Dutch dishes that are lesser-known today do you think would be most enthusiastically received if reintroduced to the public?  And which would be a harder sell?

I think many of the old-time pastries would sell very well to a modern crowd, so too would the Schales (shallow-dish casserole) since it is highly adaptable and can be miniaturized for small portions. Onion pie (a type of pizza) is also an easy sell because it matches quite nicely with beer and wine and makes good finger food. Stuffed pig’s stomach may prove difficult, although it too can be miniaturized, so in reality I don’t think there are many traditional dishes that can’t be modernized. It just takes a little ingenuity on the part of a chef, and after all the cooks in Alsace have been doing this already, so we have them to look to for inspiration: Alsatian and Pennsylvania Dutch cookery share many of the same culinary roots.

Why is it important to shine a light on the real Pennsylvania Dutch cuisine?

It is important to revisit Pennsylvania Dutch cuisine for several fundamental reasons: first, it is indigenous, derived from the land, so it is not “hot-house” cookery like Thai; it is not an import, all of the basic ingredients are here, thus it is thoroughly American, thoroughly sustainable, and ideal for the farm-to-table linkage. Secondly it is quite adaptable to further invention, so it can evolve rather than become frozen in a time-frame like classic French cooking. Lastly, it is food of the people. This is the kind of kick off your shoes style of cooking which appeals to the American temperament. And because it is so varied, there is literally something for every taste.

Who should read As American as Shoofly Pie?

I think my book was written for several types of readers. Of course, anyone interested in American cooking and American regional cultures should find something new and startling within the pages. But perhaps most important this book was written for the Dutch by one of them. I wanted to tell our story to the younger generation who may have lost touch with their roots, yet are curious to know more, to get beyond the old myths of the past and learn something about the “Why” of our culture.

There is no better way to understand someone than to get to know their food. It speaks volumes and the frugality of Dutch cooking comes through loud and clear in the recipes. In a sense my book is a Dutch survival kit because as long as you have it, you can live anywhere in the world and carry your Dutchness with you.

You can find As American as Shoofly Pie on Amazon among other places, and can visit William Woys Weaver’s website here.