Family Life, in print since 1968, is one of the most widely-read Amish publications (circulation for 2010 was a reported 31,000).  You won’t find Family Life in all Amish homes, but you will in many, if not a majority of Amish households. 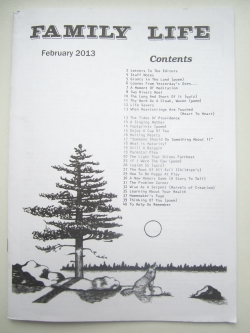 One of the most interesting  parts of the periodical is a regular feature called “The Problem Corner”.   It’s essentially an advice column where readers generate the answers to a question or issue posed by a fellow reader.

“The Problem Corner” appears once every 2 or 3 months and features one question and usually 6-10 responses (and sometimes more).  They are sometimes narrow issues, but more often general problems of wider concern.

Questions may be directed to Amish readers, or more often, couched in a manner in which they can apply to all Christians.

Here are a few examples from the past year’s worth of issues, along with excerpts of some of the answers:

1) Can anyone explain the difference between forgiving oneself for past mistakes or merely excusing oneself? (February 2013)

2) In our community many people make a living building fancy homes for the wealthy.  Many of these jobs are gotten through contacts with designers and architects who include eye-pleasing extras in the latest trends.  Is this violating our Christian principles? … There seems to be a popular mindset that if we build something for those outside the church, and take no pride in it, there is nothing wrong with doing so, regardless what it is.  Is it still possible to live humbly as pilgrims and strangers if we have such an occupation? (August/September 2012)

3) Is it right to discipline or correct someone else’s child in front of the mother in the child’s own home?  Maybe she thinks the parents aren’t doing their duty, but is it in her place to train other people’s children? (November 2012)

In past years “Problem Corner” issues have included natural remedies, gender imbalance in Amish settlements, reporting crimes to the authorities, multi-level marketing, and ministerial involvement in cases of domestic abuse.

Wisdom from a wide “community”

Since Family Life is read by Amish of many different affiliations, as well as Mennonites and non-Amish, the answers printed will vary, and there is not always (or even often) agreement on the best course of action. 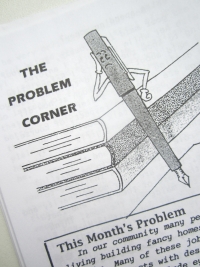 Thus you get a pretty good feel for the idea that there is rarely one “Amish opinion” on most issues outside of core beliefs like non-resistance and adult baptism.

Since some letters are anonymous, you can’t always tell who the Amish respondents are, but you can often get an idea from the response itself. Frequently readers will share from their own experiences, especially if it is an issue with which they have also struggled.

The idea of “Amish community” is something we often think of on the level of church and settlement. With “The Problem Corner” we have an example of Amish tapping into a wider “Amish community” which spans the magazine’s large readership.   Interestingly it is one which also incorporates ideas from non-Amish, though often similarly-minded people.