Why don’t they just build buggy lanes wherever Amish live?

People often ask just this, especially when there is a bad buggy accident in the news.

Realistically, it’s an idea constrained both by budgets and practicality. But in some limited cases, areas with larger Amish populations have done just that.

And some Amish-heavy areas will be adding buggy lanes in the next several years. So let’s have a look today at some photos of Amish buggies using buggy lanes. 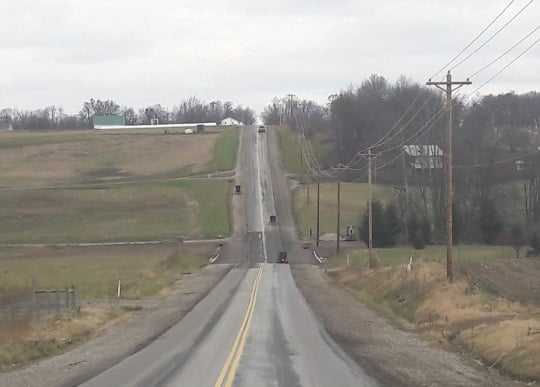 Included here at the end of the post is an odd sequence (at least it seemed to me) of one buggy using a lane to pass another buggy. 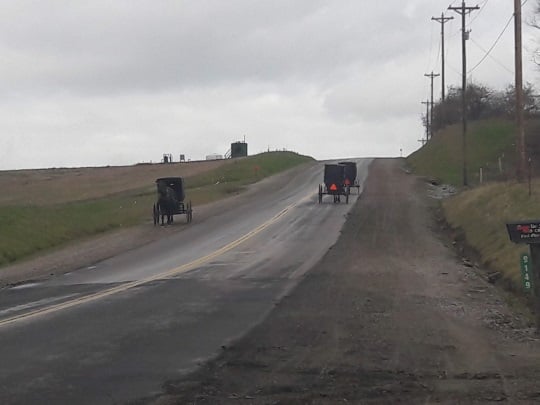 I took these photos last month on a road in Holmes County. My camera’s geo-location was apparently switched off at the time. But I believe the road featured here is a segment of Mt. Hope Road (CR-77) a bit south of HC-229.

I pulled off to the side for a bit and watched the traffic go by. Here is a car approaching a pair of buggies going uphill. 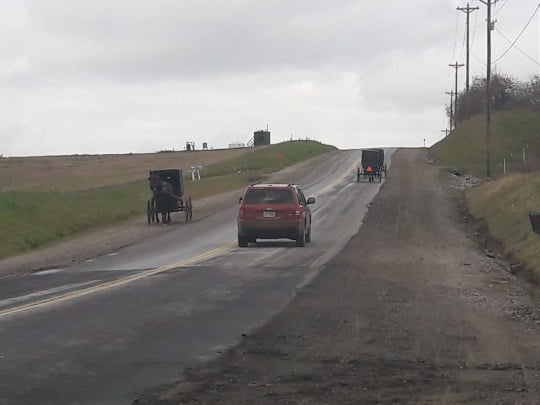 As you can see, these are wide lanes which provide ample room for buggies. I think these are more convenient for pulling off when cars come up from behind. 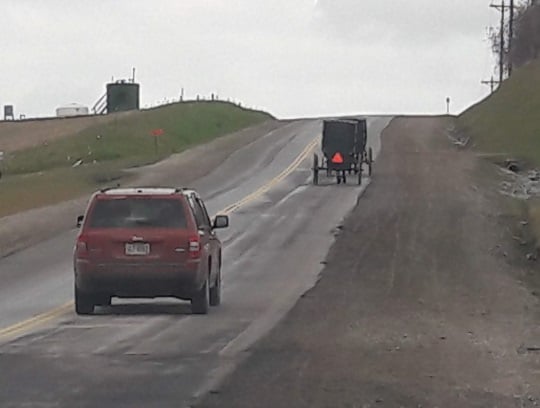 I’m not a buggy driver, but I believe the asphalt would be more pleasant to travel on than the bumpier, less-stable gravel.

Some of the more important roads do have asphalt buggy lanes, as you can see in this photo from another part of the community: 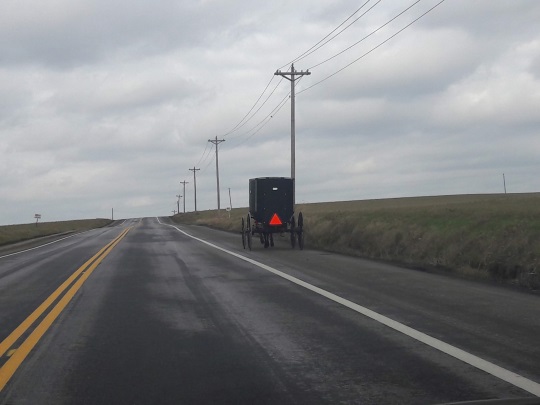 Still, these gravel lanes make a lot of sense especially in these hilly areas, in a couple of situations illustrated in these photos.

The two buggies in the right lane above were traveling uphill on the asphalt, while the one in the next photo below was using the gravel lane coming down the hill.

Pulling off into the gravel immediately after (or even better, before) cresting the hill is a wise move, as a car traveling over the crest at 45 mph (or faster) can rapidly come upon a buggy just out of sight over the hill, leading to a bad accident.

So this buggy driver doesn’t have to worry so much about a vehicle flying over the hill behind him. 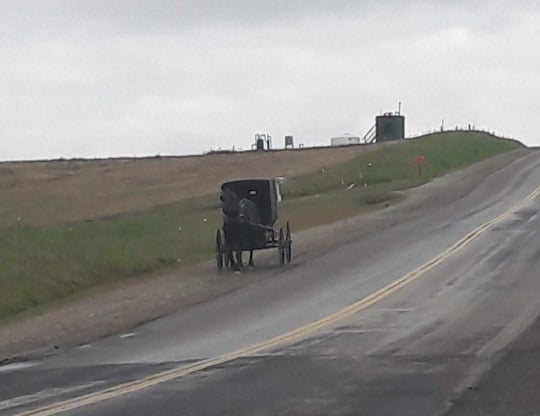 The lanes are also useful when buggies slow down to roughly walking speed while going up a steep hill.

Car drivers get frustrated waiting for the buggy to crest to a safe visibility…and then are tempted to pass when it’s not safe to do so.

And to illustrate the point, going up the hill I happened to get “stuck” behind the two buggies which are visible in the above shots. As you can see they were persistently sticking with the main lane, and not using the gravel lane. 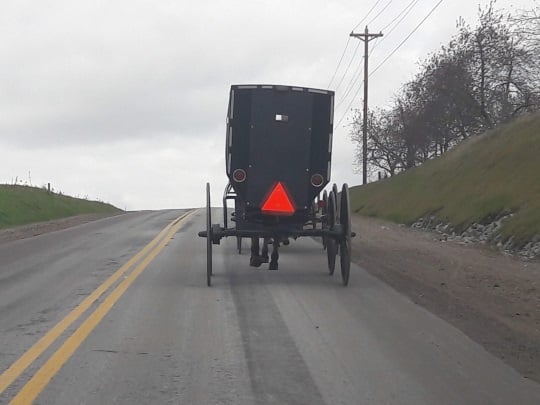 So I was wondering at this point what exactly the lanes were for, if both buggies were going to use the asphalt while I slowly crept along behind them. Maybe they hadn’t noticed me? Neither had rear-view mirrors, so they were probably from a more traditional group like the Dan church (Andy Weaver Amish).

But suddenly the rear buggy decided it was time to make a move, and pulled off into the gravel. 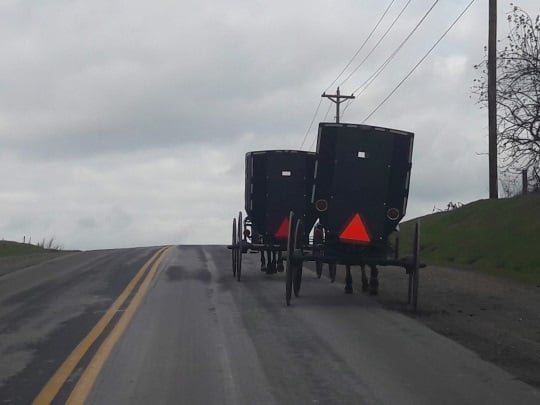 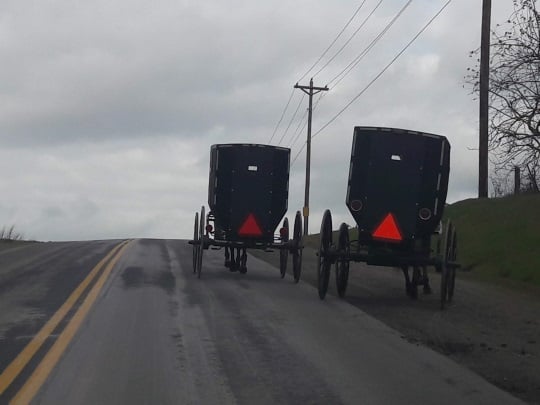 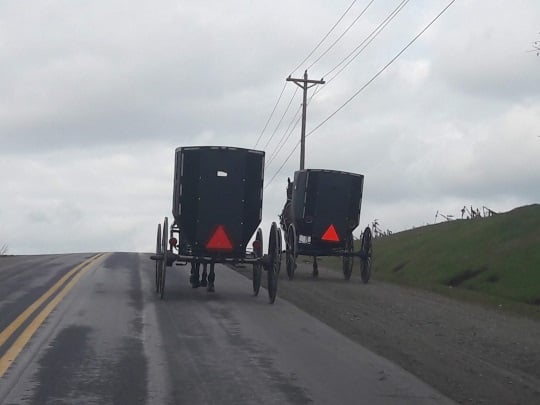 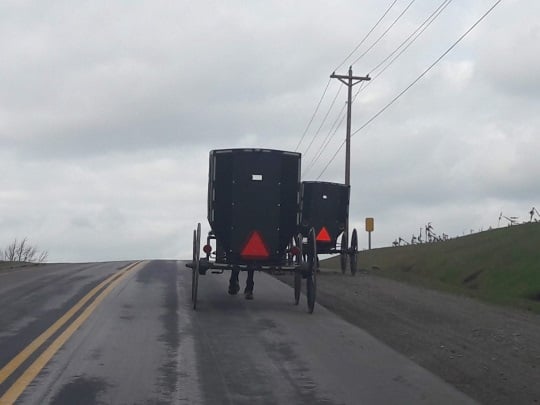 So that buggy disappeared…but the slower front buggy stuck to the asphalt. So in the end it didn’t make much difference to me (I wasn’t about to try the passing move the other buggy made).

Holmes County has made its share of road improvements since I first started visiting in 2005, including safety enhancements at dangerous intersections such as the one at CR-77 and State Route 62.

Geauga County is widening roads as part of their $14 million safety investment, and Elkhart County, Indiana is planning to start installing more buggy lanes on some of their busier roads by 2020.

These particular lanes I believe are relatively new (past 5-10 years). They’re an example of a cheaper solution (gravel) being used to enhance safety on secondary, but nonetheless fairly well-traveled, county byways.

Even though the lanes might not have been ideally used in this case (at least not from my perspective 🙂 ), these are helpful improvements, and I am sure are appreciated by local drivers – car and buggy alike.