A black walnut dental treatment is apparently enjoying popularity in Amish (and I assume other) circles.  Black walnut extract is claimed to fix cavities, cracks, and toothaches.

A local dentist, however, says it doesn’t work.

Dr. Stephen Raffensperger is quoted on the treatment in this article.  He is adamant that it does not do what it claims.  But  he’s not being listened to.

“If I say directly that it doesn’t work I’m not to be believed” he said. “Apparently the word is out that your dentist doesn’t want you to know about this.”

“Anything I say is suspect because obviously I don’t want to go out of business. I can’t tell my patients — and I’m a chemistry major — that this doesn’t work. I’m dealing with miseducation and it’s about belief.” 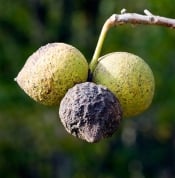 This comment brought to mind the psychology behind conspiracy theories.  That is, the fact that there is no evidence to support a given conspiracy doesn’t matter–that just shows that “the powers that be” are covering something up.  A lack of evidence may even be seen as support for a theory.

Raffensperger, a man with a 27-year practice in Intercourse, PA, is not to be trusted.  Maybe there are other issues at work not mentioned in the piece, but you’d think he’d get the benefit of the doubt at some point.  I’m sure there are those that do believe him, but apparently a good chunk of his patients do not.

The article includes a round-up of various web resources’ comments on the treatment, including earthclinic.com, drugs.com, and the Lance Armstrong Foundation.  Some mention other uses, including for varicose veins, rheumatism, and high blood pressure.

Perhaps there is medicinal value to black walnut extract, but at least one dentist says it won’t solve your teeth problems.  Anyone encountered this remedy before?