Less asthma, thanks to an Amish lifestyle?

I’m not an asthma sufferer, but I found this pretty fascinating. A recent study by researchers at Franklin and Marshall College suggests that something about the Amish or their lifestyle may be connected to lower rates of asthma.

From the Lancaster Online article:

Living on farms and coming from large families are considered protective factors against asthma, just as city dwelling is a risk factor, Miller said.

Those in big families, for example, “are just exposed to more stuff,” he said.

But even when non-Amish women who resided on farms and belonged to large families were compared with their Amish female counterparts, the incidence of asthma diagnoses among Amish women was still less, Miller said.

“We think it’s possible something about the Amish lifestyle is more protective” against asthma, he said.

“It’s conceivable there are genetic factors,” Miller said. Also, exposure to horses could help reduce the risk, he said.

Perhaps this could lead to better treatments, which would be good news for asthma sufferers. However, it’s important to note that none of this is conclusive:

“All we have is a hint that Amish women have less asthma than other women in Central Pennsylvania,” but it’s enough of a difference to require further research, said F&M biology professor Kirk Miller. 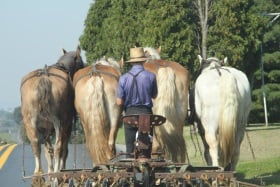 Most people don’t spend much time worrying about asthma.

It seems to be thought of as more of a “nuisance condition” than something debilitating. But, you can die from an asthma attack, and I’m sure people who have it don’t take it lightly.

In fact, the Asthma and Allergy Foundation of America claims that each day well over 4,000 Americans visit the emergency room due to an asthma attack, and 9 die from one.

According to the CDC, 8% of “noninstitutionalized” adults have asthma, as do 9.3% of children–over 25 million people in total.

Any asthma sufferers, or relatives of sufferers, out there?  How bad can it be, and how do you deal with it?