A few months ago I started to notice search traffic coming to this site for a curious term.

“Amish wood milk” is not something I’d ever heard of. But quite a few people were looking for it, with even dozens a day landing here for “Amish wood milk”-related searches.

How where they arriving at Amish America, since–to my knowledge–I’d never written anything about this mystery liquid (does it go with pie? is it tapped from trees like maple syrup?)..?

It turns out most were touching down on a post about Plain and Happy Living, a recipe and remedy book written by an Amish woman.

I had shared a recipe for “Poor Man’s Rivvel Soup” on that page, which mentions “milk”, the regular kind from a cow, a few times. But nothing at all about Amish wood milk.

This leads me to believe there have probably been many thousands of people searching for this term, if that number of web searchers were stumbling onto this nearly unrelated page.

If you are like me and it took you a while to figure this out, Amish wood milk is no beverage, but rather a furniture cleaning product. 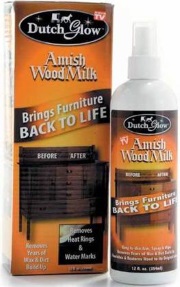 You’ll also find there a selection of enthusiastic, anonymous testimonials (“All I can say is WOW!…I’m a Dutch Glow convert for life”) and at least four “Order Now” buttons.

Is Dutch Glow Amish Wood Milk just another example of dubious use of the Amish name to sell a loosely (or not-at-all) associated good? You can probably guess what I’m thinking here…

The alleged Amish origins are a mystery, according to one review, which likens it to an “ordinary cleaning solution”:

There is no evidence that it is a century-old formula invented by the Amish (an old-fashioned Christian sect known for their rejection of technology and, apparently, their glowing furniture.) In fact, they don’t even list its ingredients at all.

Another review gives it higher marks, but likewise couldn’t figure out much about the product, “based on a century-old woodworker’s formula”, according to the Dutch Glow ad. 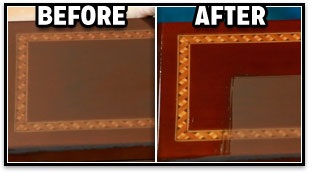 So of course this all brings to mind past products with sketchy claims to Amishness, such as the Heat Surge Amish Heater, or Amish Origins balm.

That doesn’t necessarily make this or that a bad product…it may just mean you’re paying for a story as much as you are a cleaning chemical.

Anyone seen or used Amish Wood Milk before?

How about other products that carried the name “Amish”…but made you wonder?