Lancaster Online recently published a series of articles on the Amish and social media use.

Eight years ago this topic got attention when it was publicized in another Lancaster Online report that Amish youth were using Facebook. We also saw Facebook covered in books like Growing Up Amish: The Rumspringa Years.

Yet time passes and things change, especially in the fast-moving world of social connectivity applications.

Facebook has become passé for many young people in general, replaced by other networks including Instagram and Snapchat. Amish youth have followed this trend, and are on these platforms now:

For many Amish young adults, their follower count on Instagram, which is owned by Facebook and used for photos and video-sharing, almost triples their amount of “friends” on Facebook.

How many Amish (youth or otherwise) use social media? To figure that out, you have to look for clues:

It’s impossible to know how many Amish youth are using social media sites. The young adults seldom identify themselves as Amish, but they expose their upbringing in other ways.

The telltale signs? Traditional Amish dress, “friends” and “followers,” and a traditional Amish name like Stoltzfus, Zook or Glick, according to Charles Jantzi, professor of psychology at Messiah College and researcher of Amish youth and social media.

And what are they posting?

The content on Instagram doesn’t differ too much from what Amish teens were posting on Facebook years ago. On a typical young Amish adult’s Instagram account, one can see selfies, and photos of trips to the beach, friends, and products of trade, such as freshly planted fields or beautifully stained cabinets.

Captions are often positive and encourage followers to pursue a life with values reflected in the Amish church. More often than not, captions include Bible verses.

Jantzi makes the point that these platforms contrast sharply with Amish mores:

“(Instagram) really places a great deal of emphasis on the person,” he said. “…and that’s so different than Amish tradition.”

“It’s hard for me to imagine that (Instagram) is not chipping away at some of those internal values that the Amish hold,” Jantzi said.

On the other hand, this also brings to mind a point that Steven Nolt made in the 2011 article about Facebook usage: that since Amish were mainly “friends” with other Amish on the platform, it could have a sort of insulating effect, rather than extending Amish youth’s reach into non-Amish circles.

Amish women, it’s reported in a second article, are also using social media – and are finding it a way to enhance their businesses (typically multi-level marketing):

But now, as social media infiltrates the tight-knit community, many younger Plain women, including Amish women, are seemingly using their Instagram accounts to promote their products.

Instead of selling kitchen utensils and food storage containers, many are opting to sell dietary supplements (including hunger suppressants), vegan makeup products and skincare supplements from multi-level marketing companies such as Arbonne and Plexus.

LNP worked with Amish young adults and scholars to confirm the Amish and Plain identities of consultants located in the area.

The product consultants (or ambassadors, depending on the company) in Lancaster promote a picturesque life on their Instagram accounts — photos of trips across the country, picking fresh strawberries from the garden, wearing on-trend “English” clothing — and, of course, whatever products they’re selling.

There are some questions here: combining “Plain” and “Amish” into the description makes it unclear how many of each might be represented (there are some Anabaptist churches which could be described as Plain, but which are more technology-friendly).

That noted, another, frankly surprising example is given of an Amish woman who received a customized, downright fancy buggy as a reward for her multi-level marketing success:

For example, Martha Yoder, an Amish woman in Holmes County, Ohio, works as a regional vice president for Arbonne, according to her Facebook page.

Arbonne is a multi-level marketing company that sells skincare products and health supplements. The company, which relies heavily on its “consultants'” ability to recruit other saleswomen, rewards its highest earning and recruiting members by giving them monthly $800 payments for a lease to a Mercedes Benz, according to the company’s site.

But Yoder, who isn’t allowed to drive, designed — with the permission of Arbonne — her own custom, Arbonne-emblazoned buggy, according to several Facebook posts made in August 2017.

I would call Yoder an outlier here just based on the appearance of the buggy: 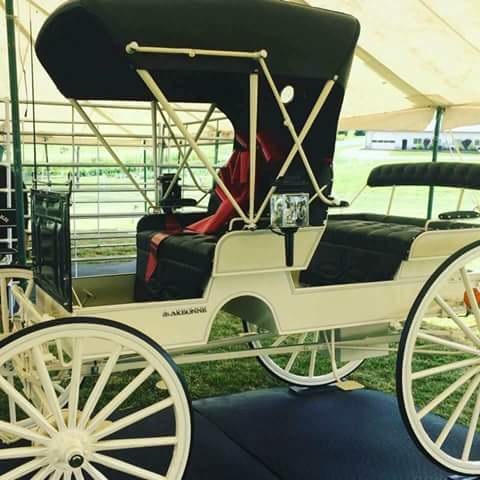 I doubt that she is driving this to church on Sundays. But maybe it makes for a fun occasional spin.

The usual caveats apply here: this is more likely going to be seen in the more progressive communities. These articles are based on research done in Lancaster County and Holmes County, in a number of ways two of the most progressive communities. I don’t expect to ever find many Swartzentruber Amish basket makers hawking their latest creations to a flock of “Insta-followers.”

The business strategy of the majority of Amish women – whether they are running sewing businesses, market stands, or variety shops – is just not going to hinge on Facebook, Instagram, or anything like that.

Those who do use those platforms are generally outliers, younger and unbaptized/unmarried, or in specific industries in more progressive communities. You’re not going to find a lot of married, church-member Amish women plugging products and expanding networks on Instagram.

But some will use it, either directly or indirectly (meaning, with an outside hand involved).

That goes for Amish businesses in general. To cite a fresh example: the owner of the Virginia bulk food store recently featured here mentioned his Facebook page; however it was handled by an outside person, which is probably going to be the more common approach.

Another good example would be vendors in Pennsylvania Dutch markets, whose businesses are apt to be promoted along with the market as a whole via social media.

Social media is hard to stop

Social media is not taking over Amish life, as it has English life. Yet it’s difficult to completely avoid, even if your home has no electricity and your primary “wheels” have hooves.

Amish have often expressed concern over the infiltration of technology, seeing smartphones in particular as a danger categorically different from other past potentially socially-destructive innovations.

As with other innovations and outside cultural trends, business is a gateway for social media to enter the community – despite those concerns.

While some are leveraging social media to expand their business and social connections, I don’t expect we’ll get to the point where Amish churches are using Facebook groups to share information about upcoming events.

However, even 10 or 15 years ago, it would have been difficult to imagine Amish business people carrying around high-powered smartphones in their pockets…so I’m just going to close with, “never say never.”