In addition to sports, the Amish also enjoy good old-fashioned family-oriented games that can be played around the kitchen table.

Before moving over to Abe and Rachel’s last week, I got in a nice round of ‘Life on the Farm’ with Daniel’s family.  The kids love it and wouldn’t let me leave without a game.  This neat little Monopoly knock-off pits would-be farmers in a race to amass a herd of 60 cows. 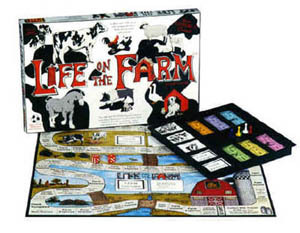 ‘Chance’ and ‘Community Chest’ cards are replaced by ‘Farm Income’ and ‘Farm Expense’ squares.  Instead of collecting $200 each time you pass ‘Go’, here you collect your milk check–$100 per cow you own.

You can also land on the dreaded ‘Pay Taxes–$100 per cow’ square, draw an ‘Insemination–Breeder’s Fee’ card, lose bovines to the swamp or careless motorists, or hit the jackpot and inherit five cows from a deceased uncle.

Daniel’s kids took us on and proceeded to deliver a walloping, with eight-year-old Elmer coming out on top at around 10pm, well after the littlest ones and Mary had fallen asleep on the couch.

The kids were hardly fazed but I think Daniel and I had had enough by then, especially considering Daniel had to return to the task of running a real farm in just a few short hours.

So I stumbled over to Abe’s and crashed into my upstairs room,just as Abe and Rachel were returning from visiting his sister in another settlement.

Over at Abe’s the game of choice was ‘Scum’.  This card game is akin to ‘Uno’, with the object being to get rid of your hand of numbered cards the fastest.

The winner of each round becomes President, second place Vice-President, all the way down to ‘Scum’, affectionately known as ‘Scummie’, and his right-hand man, the ‘Scum Assistant’.

This pair of bottom-dwellers are forced to give up a few of their best cards at the start of each round to the executive team, in effect ensuring that they stay down low on the totem pole for a good while.

We got in a couple of games on Saturday as well as Sunday night, the second time with Abe’s parents and most of his brothers and sisters.  Things got pretty competitive but Rachel generally dominated, holding the presidency about five times.

I have a feeling that if not for milking the next morning the game would have gone on into the wee hours.  As it was, I was barely standing by the end, and even continuously munching on the heavily-salted popcorn we passed around could not keep me lively.

The challenging thing I find with late nights in Amish homes is the lighting.  Not that it isn’t bright enough–usually a single gas lamp will illuminate a kitchen and adjacent living room–but that it heats you up and dries you out.

In the summer you sort of roast and I usually have to gulp water or end up going hoarse.  But no complaining here–it beats hitting the sack at dusk.