Amish Settlement Attempts Since The 1700s

Joseph Donnermeyer of Ohio State University today shares with us an article published two weeks ago in the Budget newspaper.

In it, Joe looks back at all the Amish settlement attempts throughout their history in North America.

He highlights some interesting figures, including a total of 342 settlement attempts since 2000.

At first that seemed higher than I’d expect, but it only underscores the growing Amish population and accelerating rate of new settlement attempts.

How many times in history have the Amish started a new community? In total, there have been well over 800 settlement attempts since they arrived here in the 1700s.

Though the Amish have been prolific in starting new communities, not all of them survive, of course.

Joe’s data gives us a statistical big picture of how many did survive each era – first by half-century, then by decade, and more recently, year-by-year.

Below you’ll find the brief article and accompanying data. Those of you who enjoy studying the phenomenon of Amish population growth should find this interesting. Thanks to Joe and the Budget for letting us share it here.

Final note: Joe is behind a new publication called the Journal of Plain Anabaptist Communities (JPAC), which we’ll have more on at an upcoming date (in the meantime you can contact donnermeyer.1@gmail.com for details).

The end of a decade seems like a good time to pause and look back on Amish settlement growth throughout their history in North America. In this most recent decade, 183 new settlements were founded. This same time period saw 28 settlements failing for one reason or another. That is a net gain of 155! The first decade of the 21st century witnessed 159 new settlement attempts, and 40 extinctions, for another large net gain of 119 settlements. Altogether, 342 settlements are founded so far in the 21st century, and the total number of attempts throughout their history in North America is 842, of which 574 exist today. It is likely that the number of Amish settlements will exceed 600 sometime during 2020 or 2021. At that point, the number will have doubled since 1999, when the total was not quite 300.

*Information for this chronology is based on: (1) the files of the Pathway Heritage Historical Library, Aylmer, Ontario, and (2) information from the Young Center for Anabaptist and Pietist Studies, Elizabethtown College, Elizabethtown, Pennsylvania. The definition of an Amish settlement is based on criteria that was originally developed in a series of publications titled “Amish Settlements Across America” by David Luthy (Pathway Publishers, Aylmer, Ontario).

Note: Here’s the accompanying statistics table which ran in the Budget: 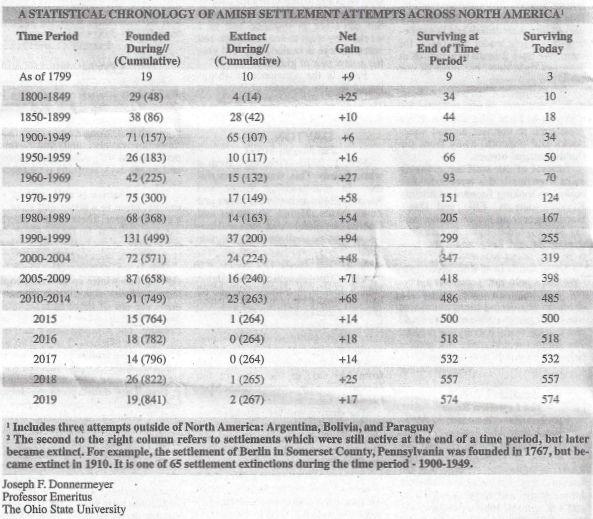 Here’s the same data in a table which might be easier for some to read: