The Amish Studies site based out of Elizabethtown College tells us that as of mid-2007, there were approximately 400 separate Amish settlements comprised of approximately 1,600 church districts in 27 states and Ontario.

The Amish continue to grow at a rapid pace and can today be found in such unlikely places as Mississippi, Florida and Montana. 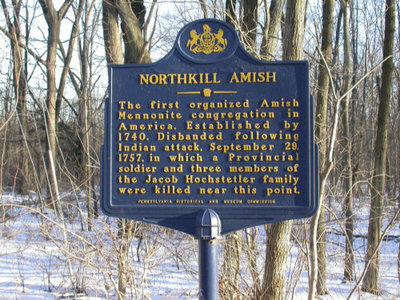 Throughout their 250-plus years of existence on the continent, Amish groups have made many unsuccessful attempts to settle in places as far afield as California and Latin America.

In David Luthy’s excellent book, The Amish in America, Settlements that Failed, 1840-1960, we can read about dozens of settlements which for one reason or another failed to get off the ground, sputtering out within a few short years.

Other communities documented in Luthy’s book lasted many years before gradually going extinct.  In some settlements you may find buildings or cemeteries left behind by the Amish inhabitants.  In others there remains hardly a trace.

In a companion pamphlet to the work, Luthy outlines reasons why settlements fail, including a lack of ministry and harsh economic conditions.  Drought, Indian attacks, and community disunity also play a role in many settlements’ downfall.

Settlements that Failed is an ongoing feature on the Amish America blog.  Look for more posts on the topic in the near future.

In the meantime, you might enjoy the following posts on Amish communities that didn’t make it:

Amish in New Orleans?  The fate of the original urban Amish

California dreaming–Why are there no Amish in America’s ‘foremost farm state?’