The Amish of Parke and Wayne Counties, Indiana 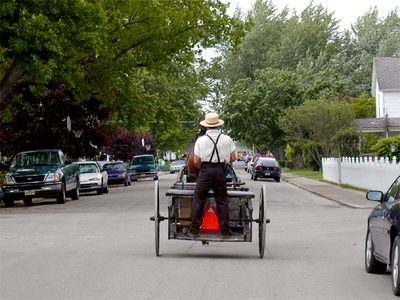 Indiana is an interesting place when it comes to Amish diversity.

In the Hoosier state, you will find communities of New Order, Swartzentruber, ‘Swiss’, and of course, ‘standard’ Old Order Amish.

One relatively new influence in the state has been the presence of two settlements of Lancaster Amish, which both formed in the 1990’s.

The two settlements, on opposite sides of the state (Parke and Wayne Counties), number just a handful of church districts each.

The most obvious tip-offs that you are not in a typical midwestern Amish community are the gray-topped buggies, the style of clothing, and the last names.  Stoltzfuses abound.

Lancaster Amish have typically formed daughter settlements closer to home, ie, in other parts of Pennsylvania, or in neighboring states like Maryland.

One attraction of Indiana is the relatively inexpensive farmland.

Conventional wisdom has it that a Lancaster farmer can sell his home farm and buy several similar-sized farms in these areas.  That is a big attraction for the highly farm-oriented Lancaster Amish. When they move, entrepreneurial Amish also bring their trades along, setting up small businesses, including stores, buggy makers, and woodworking shops (read more on Amish furniture in Indiana).

Steven Nolt and Thomas Meyers’ book An Amish Patchwork is an interesting look at Old Order diversity in Indiana.  It also examines the Old Order Mennonite presence in the state.  Recommended read.

For an overview of Amish in the Hoosier State, try the Indiana Amish state guide.