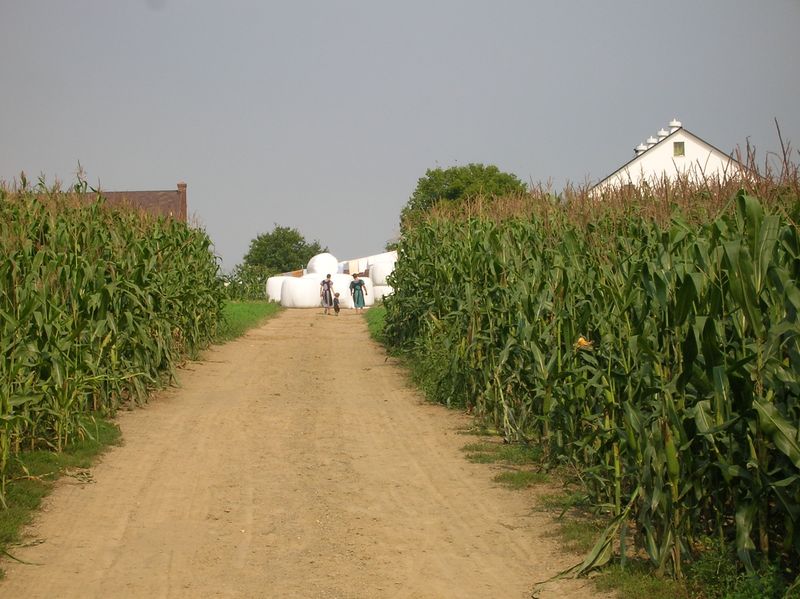 The last installment, of three, from the recent Lancaster County trip:

When I’m at Abe’s, on Saturdays we sometimes do a big breakfast down by the river out back.  This involves Chef Abe grilling up a variety of meats–sausage, bacon, spicy sausage, etc, on an open riverside fire (though this time he used the grill up by the house).  Eggs, toast, jelly, sliced peaches, pancakes, shoofly pie, black coffee and orange juice round out the brunch.

Abe’s family usually comes down and it’s a semicircle of 40-some seats around a picnic table laden with food.  This time, Saturday brunch followed a day of fairly heavy rain.  Some Amish neighbors kayaked by at one point, taking advantage of the fast currents for a little recreation.

Abe’s workers were among those in attendance, a bit of a thank-you from Abe for their toil among the tomato plants.  The terrain is a little uneven down there, and I’m not sure if it was the slickness of the grass, or a misplaced seat leg, but one of Abe’s workers, returning with a heaping tray, managed to flip himself head over heels, tray launched high and landing in the best spot possible (from a comedic standpoint).

The egg and jelly made a nice addition to his shirt, and the other boys in attendance laughed mercilessly.  He’s lucky he didn’t slip-slide into the river itself, but he shrugged, reloaded, and accomplished his breakfast objective.  In any case, the riverbank at Abe’s is an ideal spot for a family meal, entertainment or not.

I also had a chance to visit a new market, in Maryland.  The Miller crew and I headed down for a visit/research trip.  Our last Amish market excursion took in four markets in two states.  With their array of food stands, Amish markets are a good place to put on weight, or to procure supplies for putting on future weight.  I picked up some pumpkin butter this time around.

Speaking of pumpkins, over at Jacob’s place, I mentioned in a previous post that the tobacco was coming in.  Last year, in addition to the usual tobacco, Jacob had planted pumpkins in a patch of a few acres.  This year, the orange globes were conspicuously missing from Jacob’s fields, replaced by more tobacco plants.

Jacob explained that he’s not doing them this year, as he wasn’t sure how much disposable income people would have for extra pumpkins around the house, given the economic situation.  Tobacco, however, remains a reliable bet.  “People have got to do something to calm their nerves,” he supposed.