In a nice story of sacrifice, some Amish and Mennonites recently spent holiday vacation time helping victims of an April 2018 tornado. About 200 homes and businesses were damaged last spring by a 115-mph-wind tornado in the area of Meridian, Mississippi.

The volunteers are working through the Mennonite Disaster Service organization (MDS). You can see Amish men in this photo doing what looks like cleanup prior to reconstruction work: 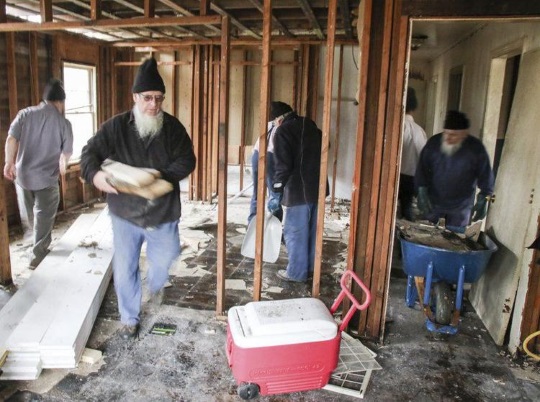 Here’s more from the Meridian Star:

MDS members who are part of the Amish community in Indiana traveled to Meridian to lend a hand.

Waters said these volunteers gave willingly to help people in need during the holiday season.

“They were on break and used their vacation and holiday time to come here and work on some of our homes,” she said.

Larry Miller is a member of the MDS, and says the relief efforts the group provides are unique.

“Historically we’re (Mennonites) different from other Protestants because we don’t do war, we like to do peace,” said Miller. “It’s our response to doing something very important for the country in lieu of doing military stuff that would violate our conscience.”

According to Miller, the MDS is exceptional due to its large pool of volunteers and its ability to delegate 90 percent of funds to actual service, and only 10 percent toward administration, a number, he says, not many relief efforts can duplicate.

“Our national office has a hotline to recruit volunteers,” said Miller. “We draw the funds and chip in free labor.”

Nice way to put the message of Jesus into practice during the Christmas season. Though it is definitely hard work, for Amish volunteers it is also a nice chance to see another part of the country while doing good for a faraway community.

Amish frequently lend muscle to disaster relief efforts, whether via MDS or other venues. One example is the post-Harvey recovery efforts in Houston. The city has seen at least 600 Amish and Mennonite volunteers help rebuild since the devastating hurricane struck in the summer of 2017.

The Meridian tornado, affecting just a small corner of the country, was not nearly as high-profile a disaster as Harvey (this was the first I’d heard of it). I think that’s one thing I liked about this story – and the fact that the volunteers came here a full eight months after the tornado happened, because there was still work to be done.

It’s just nice to know there are organizations and people like this out there, and that if there are people in need then they are going to help as they can, including those disasters that don’t get the world headlines. A hearty hat tip to the organization and its volunteers – Amish, Mennonite, or whoever else they might be.