There’s been a change in Illinois:  Amish gun owners will now have to “say cheese” for their gun IDs.

According to this news story, if things stand Amish will apparently now need to have pictures on their Firearm Owner’s Identification (FOID) cards.

This story might shed some light on a couple of lesser-known topics: photo IDs for Amish and other religious minorities, and the Amish approach to hunting.

First of all, hunting.  Amish don’t bear arms against others, but do use them to put meat on the table. 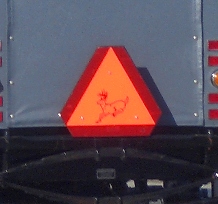 Hunting deer and other game is popular among Amish.  Amish use both firearms and bow weapons.  Amish farmers typically keep a shotgun for wiping out varmints, which I guess isn’t so much hunting as cleaning up the neighborhood.

Hunting has become an issue of concern for some Amish though.  For example, some have objected to more extravagant hunting practices.  Read more here:  Do Amish hunt?

If Amish were somehow prevented from hunting, they wouldn’t starve, though it would probably raise questions about restrictions on individual freedom and the 2nd Amendment.

The photo ID issue has come up a number of times for Amish.  Amish have traditionally been allowed photo-less passports (which might be used when traveling to Amish settlements in Canada or going for medical treatment in Mexico).

Some states, like Pennsylvania and Ohio, do issue nonphoto identification.  Individuals must provide a form stating their religious objections, along with the bishop’s signature (see The Amish and the State for more).

Occasionally changes in policy have affected Amish.   After the terrorist attacks of September 11, new passport photo requirements caused challenges for Amish traveling north and south of the border.  Read more about Amish objections to photography.

What’s interesting in the Illinois case is the change was made by the outgoing State Police Director–on his last day on the job.  Sounds like a make-a-mess-for-someone-else-to-clean-up type of situation.  Parties are working on the issue, and I imagine things will be resolved in favor of the Amish.