Will Amish Votes Make A Difference In 2016?

Tired of presidential election coverage? Well that makes two of us. But I feel the Amish vote topic, which we touched on in the spring, is worth revisiting for a couple of reasons.

Back in May we shared news of a Political Action Committee targeting Amish voters (“Amish PAC”) in Ohio and Pennsylvania, two key swing states, to generate votes for Donald Trump. 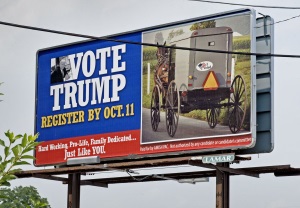 The Amish PAC planned to go after the theoretical Amish vote via advertisements in Amish-read papers and billboards in the two largest Amish communities, Holmes County, OH and Lancaster County, PA.

I didn’t expect to hear much more on this story, but in recent weeks there has been another wave of national coverage of the potential Amish votes. I suppose this is in part because we are in the final few months of this campaign, reporters need stories, and throwing “the Amish” into a headline tends to generate attention and clicks.

Interestingly, the articles have revealed more on the perspective of the Amish regarding Trump, perspective which wasn’t as available in media coverage back in May.

To me it seems like a disproportionate amount of coverage of something that probably won’t amount to a lot, especially since we are talking about a small number of people who vote at significantly low levels.

However, the people behind the PAC feel the effort may be worth it. Amish PAC Co-founder Ben Walters explains:

“If the Amish were high-propensity voters, there wouldn’t be a need for Amish PAC. But they are not,” said Ben Walters, 27, who cofounded the Virginia-based group with donors to Republican Ben Carson’s primary run.

In the 2004 presidential race between George W. Bush and John Kerry, 13 percent of Lancaster County Amish age 18 and older cast ballots – a relatively bountiful turnout. But Amish PAC contends Trump can best it.

Of registered Amish voters, an estimated 93 percent are Republican. “When [the Amish] vote, they vote for individual rights, personal responsibility, less government, lower taxes, and to protect their right to bear arms,” Walters said. “And they are coming around to Trump. He’s not perfect. He has a lot of shortcomings. But they see him as an imperfect person who is much better than the alternative.”

What do Amish think about Trump? For what it’s worth, Philly.com published the opinions of two Amishmen in Lancaster County:

It reached John Riehl, 54, who sells corn, peaches, and tomatoes at the Bird-in-Hand Farmers Market. “I was Trump from the very start,” said Riehl, sporting a classic straw hat and mustache-less beard. “Trump knows how to handle money.”

For Mose Smucker, the jury is still out. Born in the village of Churchtown, Smucker, 66, ran a tack shop that supplied harnesses for the Budweiser Clydesdale team, among other celebrity clients. Since 2008, he has operated the Grill at Smucker’s, a sandwich and beef-jerky shop at Reading Terminal Market in Philadelphia.

A registered Republican, father of eight, and grandfather of 24, Smucker said he didn’t vote in the primary election and is not sure if he’ll vote in the general, being “kind of leery” of both Trump and Clinton.

“Some people say we need a businessman in the White House, and Trump is a businessman. That’s a little bit what I’m hearing,” he said. “But some of his other values are not parallel to our beliefs.”

The Amish abhorrence of gambling is just one issue. Some experts on Amish culture say Trump’s involvement in casinos could be as much an impediment as his divorces.

Will the Amish vote matter?

Will the Amish make a difference in this election? As noted, there are relatively few potential Amish votes up for grabs, due to their overall low numbers and propensity not to vote.

However, elections have been decided by several hundred votes before. If they do make an impact, Trump would much more likely benefit over Hillary Clinton. A man quoted for a story in Maclean’s suggests one reason why:

“No Amish is going to vote for Hillary,” says the man in the library. “No one wants a woman president. … What does Bill think about his wife running for president?”

This strong statement reflects Amish Biblical views of the family and gender roles. More broadly, I would say an important reason would be traditionally greater sympathies among Amish for Republicans over Democrats (as noted above).

As Steven Nolt explains in this article, Amish reluctance to vote stems from Two Kingdoms theology, with God’s kingdom of more importance than the worldly kingdom we live in. Or as one man put it for Maclean’s:

One dairy farmer explains the case for not voting. The end of the world could happen at any moment, he says. In the meantime, every interim detail is determined by the Almighty.

“One guy on the knees (praying) will do more than 20 at the polls,” says the farmer, standing in front of his red barn. “God puts leaders in place to fulfil His plan.”

As I commented back in May, I don’t think Donald Trump as a candidate would be especially appealing to the Amish. George W. Bush benefited to a limited degree from Amish voters in 2004, but his image was that of a family-oriented Christian, two elements that resonate strongly with the Amish.

The perception of Trump is not the same. Donald Kraybill, who co-authored an article on the Amish-voting-Bush phenomenon, puts it succinctly:

“This year is very different,” he said. “Bush had a down-home, farm-type persona. He spoke about his faith as an evangelical. Trump is filled with hubris and is boastful. For the Amish, humility is one of the highest virtues.

“If Pennsylvania is decided by 300 votes, will a few Amish votes make a difference?” he said. “Maybe. But I really doubt it.”

In the end the results will reveal if the Amish PAC’s efforts were worth it. Perhaps Trump’s perceived business acumen or other appeal will entice Amish voters.

But whatever happens, Amish will continue to wield prayer for this earthly kingdom’s leaders, even as they focus foremost on their spiritual destination.