Marlene Miller joined the Amish half a century ago. She is a mother of 10 and member of a Holmes County Amish church.

Marlene is one of the rare souls (perhaps 100?) who has joined the Amish, and actually remained in the church. 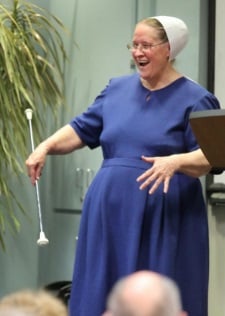 Marlene detailed her experience in Grace Leads Me Home (later republished as Called to Be Amish: My Journey from Head Majorette to the Old Order) and in an interview on this site.

Here’s what I wrote about Marlene’s book at the time:

I liked the book. We’ve seen a few accounts of individuals leaving the Amish lately (see Ira Wagler or Saloma Miller Furlong). An account of joining the Amish by a person still in the faith is rarer. I asked an Amish convert once for an interview for this site, and was politely refused, a decision I could understand. At the same time Amish literary expression has flourished with more and more publications by Amish. Marlene is not afraid to share her warts in this book. If you enjoy raw first-person life stories you’ll like this one.

Marlene made news again recently with a talk at a local library. The New Philadelphia Times Reporter covered the occasion.

Here are some interesting things Marlene shared from her uncommon perspective.

On the hardest thing about converting to a new religion and lifestyle:

Miller said the hardest things about becoming Amish, for her, were learning to speak Pennsylvania Dutch and to sew. She buys bread because she never mastered the art of making light, fluffy loaves.


On her own children and the church:

Miller said only three of her children are Amish. Of the others, she said, “I understand why they’re not Amish. It’s not so much the Amish way. It’s mainly because they want the wheels to get them someplace fast.”

A son who has been in jails and prisons for 20 years has been asking for books of Amish testimonials.

“He wanted drink and he wanted drugs and he’d do anything for it,” she said.

She believes she did the best she could to give her children a religious upbringing, with daily prayer and dinner-table instruction from her husband about the Bible.

On technology’s impact on her people:

Even the Amish have been affected by technology, according to Miller, such as milking machines that allow one person to milk a whole herd.

Given the chance, she tells younger women they should be with their husbands milking cows in the barn — together.

I had a chance to visit with Marlene once at her home and found her a delightful individual. Her story is certainly an uncommon one. Read the article in full here, or our 2012 interview with Marlene, or check out her book.