9 Questions on The Amish & Health 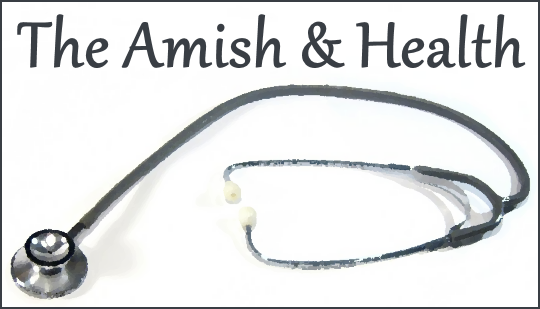 Do Amish people get immunized?

Are they healthier than other Americans?

How do Amish pay hospital bills?

Do they use alternative medicine?

This week, a look at the ways Amish approach health care and medicine:

However some Amish are more likely to rely on alternative treatments such as folk treatments, herbal and natural medicines, and alternative remedies than conventional ones, at least as a preferred first line of treatment. This choice can depend on their church, community, and family background. Read more.

Do Amish get immunized?

Some do and some do not. As with other conventional treatments, the more traditional and conservative groups are less likely to be vaccinated. Amish may refrain from vaccination due to reasons including a lack of understanding of benefits, a belief that the shots are harmful, religious conviction, and tradition (one’s parents did not vaccinate, so one does not need to either).

However, a study performed in the 1980s found a majority of Amish in one large settlement (63%) to have undergone vaccinations, though in the plainest segment of the community, only 6% had (see study reference p. 228 in An Amish Paradox).

Furthermore, a large measles outbreak in Ohio in 2014 afflicting hundreds of Amish motivated many to be vaccinated (at least 8,000 Amish underwent vaccination as a result) and spread immunization awareness across Amish society as a result. Read more on the Amish & immunization.

Are the Amish healthier than other Americans?

Studies and news reports suggest from time to time that Amish have certain health advantages, either due to lifestyle or genetics. For example, these may include a resistance to asthma and allergies, lower rates of cancer, or genetic advantages leading to better weight control.

On the other hand, some Amish suffer from extremely rare genetic diseases due to small founding communities and the practice of endogamy. Likewise, the Amish diet is also alternately praised (for fresh, natural home-grown foods) and condemned (for high use of fat and sugar in traditional cooking). A lifestyle generally more active than that of the average American no doubt contributes some health benefits to many Amish people.