You see a lot of this type of story. Amish-helping-English or vice versa.

“Feel good”, though usually a bit boring (the headline tells you all you need to know).

Still I’m glad these stories are out there. Good news when a lot of what qualifies as news is downright depressing.

What got my attention was the strange event that got Amish and English together in this community in northeastern Ohio. From the Medina County Gazette:

When the concrete two-story silo at DaMar Farms toppled over early Sunday morning, David Sigel wasn’t sure how he would salvage the tons of silage stored inside.

Luckily, neighbors, including English and Amish farmers, were ready to step in and help.

On Tuesday morning, after his insurance company gave him the go-ahead, more than 25 Amish men began pulling the concrete remains away from the silage — fermented grass and other foliage used as cattle feed — that now lay across the ground behind his barn in Homer Township.

How often do silos topple? This one came down after it was freshly filled. 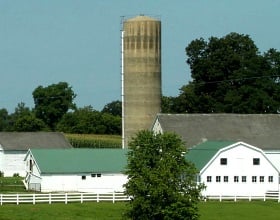 The owner’s wife described it as looking like the “leaning tower of Pisa” prior to the fall.

Good that no one was injured or killed. In partial answer to my question:

Joe Keim, one of the Amish men who lent a hand Tuesday, said he had never seen a silo come down before.

Levi Mast, an Amish man who lives across the street from the Sigels with his wife and three children, said he was surprised because he had spent many years working at the Sigels’ farm in and around the silo.

“I worked here for eight years,” Mast said. “I’ve crawled all over that silo.”

Obviously, this was a rare event. Farm life presents its own set of dangers. Panoramas of places like Lancaster County feature lots of silos climbing skyward (I think of these views as “Amish skyline” shots).

Which makes me glad this type of thing seems to be rare. I’ve probably just got an overactive imagination.