Have you ever heard about the Amish in Mexico? It’s quite a remarkable story. No, there are no Mexican Amish communities (at least not anymore). But thanks to their outreach to a group of spiritual kin, the Amish have had a regular presence in Mexico for the last two decades.

Old Colony Mennonites are an Anabaptist group with some cultural similarities to Amish, including Plain clothing and a German dialect. They live predominantly in Mexico and other Latin American nations.

Old Colony Mennonites originally came to Canada from Ukraine in the 1870s, but in the 1920s migrated to Mexico due to public schooling requirements.

They are close spiritual cousins to Amish and Mennonites, but unlike most of their religious kin in North America, they have suffered due to a weak educational system, exacerbated by their relative isolation and fear of outside influences.

Specifically they have faced serious problems with literacy and mathematics. Many have failed to recognize the importance of education, with some parents even neglecting to send their children to school on a regular basis.

The colonies in turn have had a lack of qualified teachers since their schools have been producing such poorly-educated people.

It causes concern for the church as to how our schools will eventually end up. It seems as though we are approaching a time when our own colonies can no longer provide their own teachers. Which is not surprising, for no one feels equipped for the job. Of a truth, such weak schools do have a hard time producing real teachers.

Then if someone does dare to accept a teaching position, it is often because the village neighbors keep trying to persuade him and he is poor. Without an interest in the school, without any inclination to it, without knowledge or training, with experience in teaching, and without self-discipline and practice, many a teacher is conducting school solely by routine and habit. Therefore weak schools are always getting weaker. (pp. 90-91)

The low overall level of education has had negative effects not only on their economic prospects, but also on the spiritual life of their communities, due to not being able to read and comprehend the Bible.

As Peters notes, “How can they search the Scriptures who can neither read nor understand them? They can hardly understand even when the Word is read aloud to them” (p. 91).

Help from the Amish

Facilitated by Mennonite Central Committee, Amish learned of this situation in the mid-1990s. Thanks to the efforts of some motivated individuals, they began helping by sending Amish teachers south to teach Old Colony children.

Though they were not welcomed by all, the program has grown and seen successes in the ensuing years. Amish from at least a half-dozen states have participated as teachers, or in supportive roles as house parents or house sisters.

Rebecca Miller, member of an Amish church in Ohio, wrote about the background of the Old Colony people and this remarkable project in a 2016 post (Rebecca later went to Mexico herself to teach).

You can also find it documented in other writing produced by the Amish, including the book Called to Mexico referenced above. 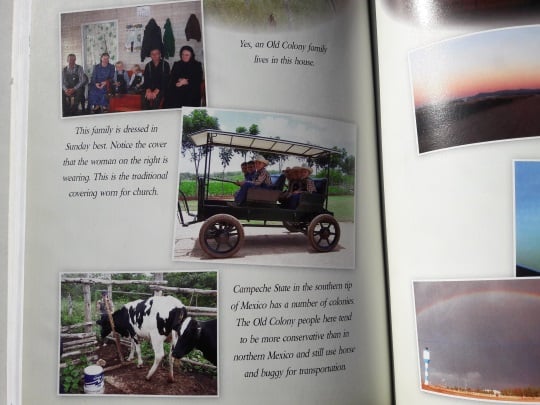 Photos from Called To Mexico, a book comprised of the writings of Amish teachers and others involved in the program

Mennonite World Review gives an update on the program in a new article:

Beginning with a 1995 visit by eight Old Order Amish to Old Colony Mennonites in Mexico, Mennonite Central Committee helped the two groups explore how to support each other.

“We sensed that at first the Old Colony people were hesitant about us coming,” said Leroy Stoltzfus, a longtime MCC worker, recalling that first trip. “They were wondering if they could trust us. Our Amish group saw their strengths and their needs, and we resolved that we would help as God made it possible.”

Twenty years later, Amish schoolteachers have a steady presence in Old Colony schools. More than 200 have served in this way.

Colony students who learned from Amish teachers are now moving into teaching positions them­selves and have implemented Amish teaching practices.

The Amish have proved well suited to help Old Colony Mennonites raise their educational standards while remaining a separated people.

The two things that jumped out at me here are the number of participants – over 200 teachers in the program’s roughly 19 years – and the fact that students have begun teaching using Amish teaching practices. This will help assure the long-term success of this program.

The Amish were a good fit for this role, in large part because they were a good example – a “people apart” who had built a successful parochial education structure, which allowed their children to become both good church members, and productive members of society.

Amish have historical and cultural similarities, and respect for Old Colony Mennonite belief, but clearly there must be a level of trust there that these are not “conversion” missions, but rather done in a spirit of brotherly love. No doubt it had to take some courage on the part of the Mennonites to open up to outside help.

I’ll wrap up by sharing this excerpt from the close of Rebecca’s 2016 post:

As of 2015 there were Amish teachers in seven different colonies in Mexico and one in Texas.

Some of the teachers are very dedicated to this project and have been teaching there for many years. The schools are running smoothly and the children are eager to learn.

The challenge now is to provide good reading material, as they have a great hunger to read. There are no mailboxes, no road signs, and no road names or numbers, as no one could read them. They have no mottoes or calendars on the walls, and there are no recipe books. They memorize all their recipes.

What a blessing it is to see these innocent children growing up and now being able to read and understand the Bible’s teaching. They can learn right from wrong and live a clean God-fearing life, because they can read Jesus’s words and follow them.

I’ve read stories of children being able to teach their parents to read. They also have Evening School for the adults now and English classes in the summer. Let us do our duty and pray for all involved, so that things may be furthered for the Kingdom.