Some Amish people make a supplemental income – and sometimes a full living – through what might be termed “alternative animal breeding”. These are not your everyday cows, pigs, and chickens we’re talking about. 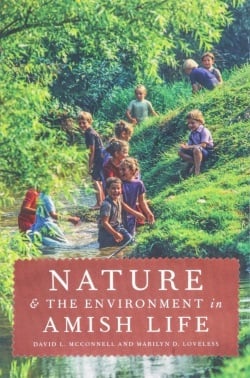 The authors of Nature and the Environment in Amish Life explore this topic in chapter 6 of their book (“Tinkering with Creation”), identifying four main categories of this activity found among the Amish.

Why are Amish involved in alternative animal breeding? Generally speaking this can be a way for families to derive an income in a trade which in some, if not many ways, “fits” Amish culture.

With their largely farm-based, rural culture, and reliance on horse-drawn transportation, Amish have a close everyday connection with animal life, and even more so for active farmers.

But in each case the fit is not “perfect”, and each of these animal breeding categories has its drawbacks that go along with the benefits they bring Amish families.

Parrots, zebras, and capybaras are about the last animals you’d expect to find on an Amish farm.

But some Amish are active in the exotic animal trade – a business which can naturally blossom from a fascination with exotic creatures. As authors David McConnell and Marilyn Loveless describe it:

The Amish share a human fascination with species that are rare, impressive, or beguiling. Often this starts as a childhood interest in animals. Day trip to nearby zoos are common outings for Amish families An Amish bird breeder enthused, “We would go to see peacocks [at the zoo], and I was like, ‘Oh, I gotta have one of those.'” Collecting and breeding exotic species may start as a hobby but can quickly become a business, allowing an Amish breadwinner to balance a “lunchpail” day job with something like farming in the off hours. (p. 107)

Amish raise a range of animals including exotic birds and four-legged beasts like llamas. This also includes less “exotic”-seeming animals like foxes and hedgehogs. Once bought, some animals become pets, others may land in breeding operations. 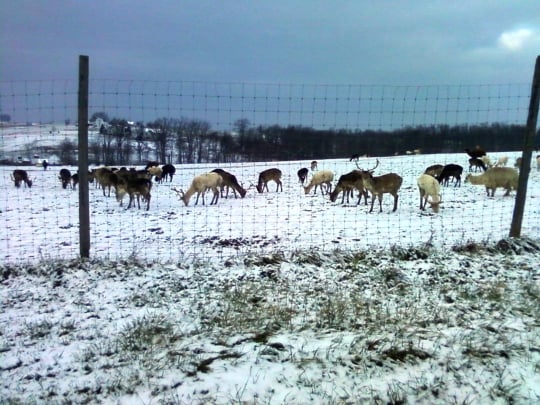 Mt. Hope, Ohio is home to one of the largest alternative animal auctions, which has counterparts in both Pennsylvania and Indiana. The authors note that the trade beyond large animals (like big cats) is pretty much unregulated in many states.

Exotic animal breeding can be an outlet for an appreciation for the many amazing creatures of the natural world – one that can become a profitable business, with some animals fetching hundreds or even thousands of dollars apiece. The critique from the conservation perspective is that the breeding practice both monetizes them and in turn drives demand for illegally-captured animals.

There is also the dilemma of raising animals far away from their natural homes. This doesn’t mean that the animals are necessarily raised (by Amish or their end buyers) in poor conditions – it rather recalls the ethical or philosophical question which zoos also face, as to whether it is “right” to keep species in environments markedly different and distant from their natural habitats.

This is the big controversial one, owing to the association of Amish dog breeding with “puppy mills”. Some Amish have been guilty of running breeding operations in inhumane, sometimes downright awful, conditions.

A traditional viewpoint that sees all animals – cows, elephants, and dogs, for instance – as the same in kind has also been faulted as a culprit in the standards seen in some Amish breeding operations. That doesn’t fully account for those Amish who have run “puppy mills”, of course, as the choice to raise an animal in subpar conditions is an individual decision.

The Amish did not create the market for pedigree and designer version of dogs, but they have taken to fulfilling it, in what can be quite profitable operations (one successful horse breeder told the authors that “These kennels, it’s unreal how much money they make” (p. 109)).

Amish in this trade breed both classic pedigree breeds, and the “designer” breeds (one that blew my mind is the “Pomsky” – a cross between a Pomeranian and a Siberian Husky…not the first two breeds you’d expect to see combined when you consider their relative sizes). Another is the “goldendoodle”. 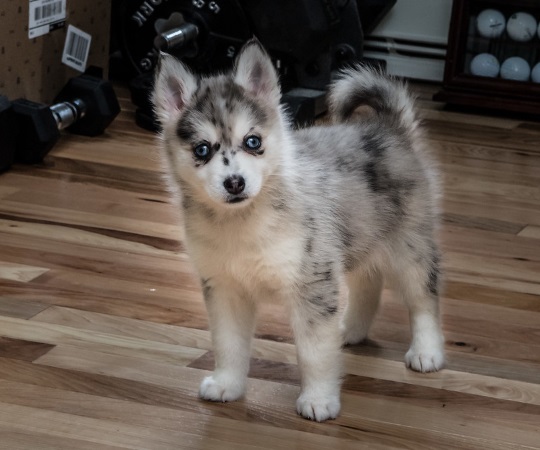 The authors note that factors including outside attention has led to better standards in part driven by tighter regulations, and in part driven by increasing awareness of the effect that the bad publicity can have on the business (and you could also add changing attitudes as far as seeing these animals as pets, as one Amish friend shared with me).

Others have gotten their standards above and beyond requirements, in some cases “building state-of-the-art kennels with indoor and outdoor dog runs, solar and gas driven heating and fan systems, and a strong emphasis on health and disease control” (p. 112). Other features of the best breeders include solid cage floors and regular interaction with humans.

One Amish breeder sees value in the more stringent regulations: “‘The new rules and regulations made the dog business better. It winnowed out the bad people, and left the rest stronger. It prompted our local group to come together, step it up a bit, and do it right'” (p. 112).

Not all Amish agree with the practice of dog breeding, but for a lot of families, it can help the bottom line of the household while providing beloved pets for a public which demands them.

At first glance this one probably aligns most closely with traditional Amish life. Amish use horses in their daily work and transportation. But in some communities the plain and simple horses of yesteryear have given way to an emphasis on specially-bred “premium” horses over the last two decades.

Some (Many?) Amish appreciate a horse which looks good on the road. “Looking good” can comprise several things, including physical appearance, a smooth gait, or a fancy trot. Some Amish appreciate having a good-looking, “high-class” horse. The authors note that northern Indiana settlements are said to be leaders as far as high-end horse breeding, with Ohio a close second.

Some in the community see this interest, supplied by Amish breeders, as a destructive exhibition of pride:

Among the Amish, a horse and buggy signals one’s economic status in a way that dress never can. An Amish man can spend upwards of ten thousand dollars on a “fancy” buggy horse. But some Amish are critical of their neighbors who own these flamboyant horses, symbolizing worldliness and pride. “We call them the ‘Rocky Boot’ crowd,” said one Amish farmer. “They just have this air about them. Money talks.” (p. 115-116)

Indeed, the authors note that “breeding pedigreed lineages is, by default, breeding horses that are candidates for the show ring or for harness racing, activities that run counter to traditional Amish values” (p. 116). 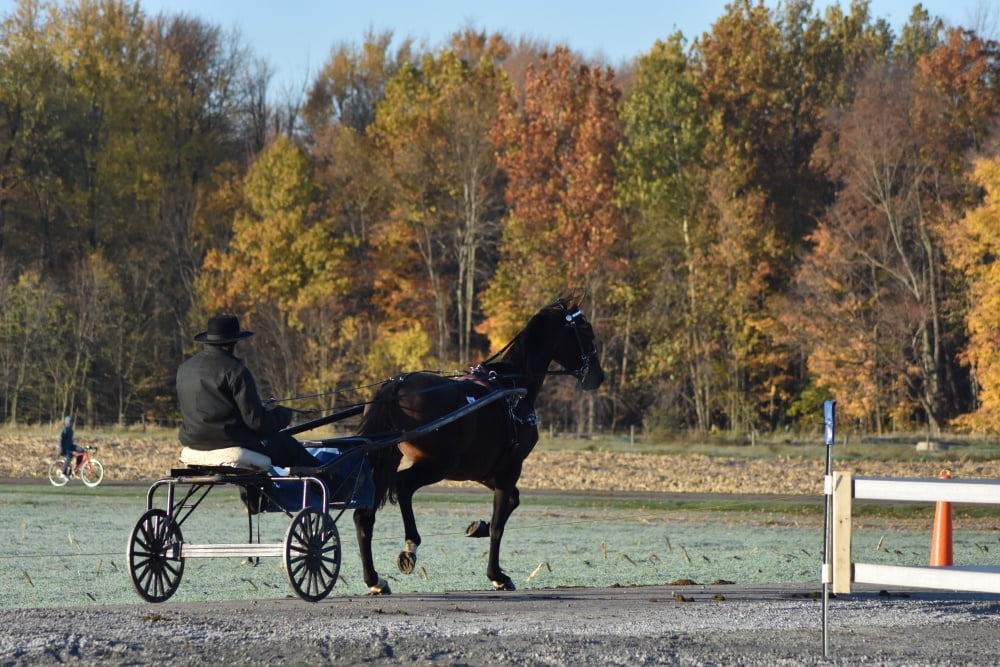 The business can be quite lucrative, with some animals selling for tens of thousands of dollars, and some stallions commanding thousands of dollars for stud fees. Some Amish use artificial insemination as well, and even ultrasounds to monitor a mare’s reproductive condition and pregnancy.

Beyond personal horse ownership, what might be surprising is that some Amish invest in horses which end up on the race track, although they “generally do not accept money from a horse’s racing earnings” (p. 116). This seems to be the domain of some wealthier Amish people. The expression “hobby horse” takes on a literal meaning for some in the community.

The horse is the animal arguably most emblematic of the Amish, one which provides them transport as well as brute power to perform farm and work tasks. In recent decades the Amish horse market has evolved, however, to reflect growing wealth, stemming in large part from business success in Amish society.

Finally, you might have come across the sight of penned deer on Amish properties. Whitetail deer breeding is described as a “growth industry” by the authors (p. 118), and the Amish are heavily involved.

One former Amishman says that of the 600+ deer farms in Ohio, “‘definitely a majority'” are Amish (p. 118). Breeders may raise from dozens to hundreds of deer in one operation.

This practice in some sense seems to align with a love of hunting common to many Amish people. Indeed, the money in the industry is not in selling venison, but in antlers.

The industry traces its origin to a deer produced by an Amish hobby farmer in the 1980s whose antlers grew at an abnormally rapid rate, ultimately resulting in an exotic and highly-desirable appearance. The deer, named Patrick, was eventually sold to a Texas breeder. 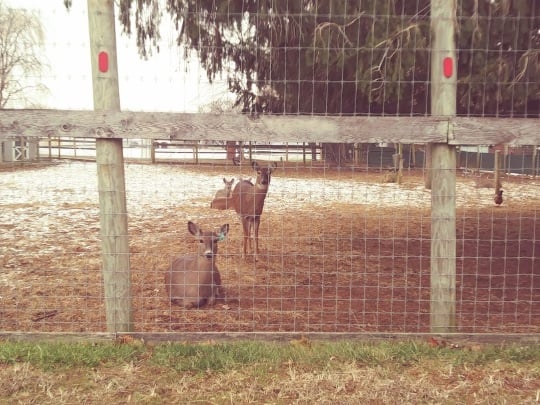 Attractive bucks can bring in upwards of $10,000, and sometimes much more, when sold to hunting ranges. The cost for a year’s worth of feed can be as little as $300, hinting at the high margins possible in this business if one is able to raise bucks with trophy-worthy antlers. There is potentially even more money in breeding for those who own a premium buck.

As with the others in this list, captive deer breeding has its critics among the Amish. Some decry the practice as unnatural.

Amish do not believe in evolution, but as the authors observe, animal breeding “produces offspring with new combinations of genetic traits, which is one of the processes that underpin evolution” (p. 123). Some of those offspring are unlike anything which one could expect to find in nature, arising through the deliberate actions of man.

Another negative is the looming threat of Chronic Wasting Disease (CWD). An outbreak at an Amish farm in 2014 led to hundreds of deer being euthanized. The industry is regulated in part in response to this threat. Amish have at least indirectly become politically involved as a result, by joining advocacy groups with lobbying arms (also true for the dog breeding industry).

Amish people need ways to make a living outside dairy farming. This is because farmland has become unaffordable for many families.

But it’s also because in 2019 there are significant numbers of adult Amish who were raised off the farm in non-farming families. Farming is no longer “second nature” for the majority of Amish, as it might have once been described.

These four types of alternative animal breeding offer opportunity for Amish families to support themselves in businesses that have ties to nature and animal husbandry, and which do not require higher education or professional qualifications to operate.

However, in some way each of these industries raises ethical and philosophical questions for the Amish. In my opinion, the authors of this book do an admirable job describing each industry and analyzing the implications for the Amish from different perspectives, including the economic, cultural, and political. I recommend reading it in full.

I’ll close by sharing a final quote from an Amish pheasant breeder from the chapter.

The authors describe the man’s statement like this: “A better statement of the rationale behind Amish breeding industries could hardly be found.” Here it is:

We believe in creation. When God created it, He said everything was very good. We have a mind to think, we have a right to tame every beast and animal, but we don’t want to abuse it. (p. 123-4)