According to a report by WWNYTV, towns in the North Country region of New York are pushing for a state law requiring more visible markings on Amish buggies.

The main town featured in the video below is Dekalb. “We want to protect both the Amish and our own citizens,” said town supervisor John Frary, who has handed out a resolution to other towns to garner their support.

This is the area of Heuvelton (St. Lawrence County), home of the state’s second-largest Amish settlement, a Swartzentruber community of around 2,000 Amish.

This makes sense as the Amish here would have the most meager buggy markings of just about any in the state.

Previously, counties have handled these issues, creating agreements with their local populations of Amish.


The video shows the below agreement document as an example. A bit confusingly, De Peyster is not a county name, but that of another town in the Heuvelton area: 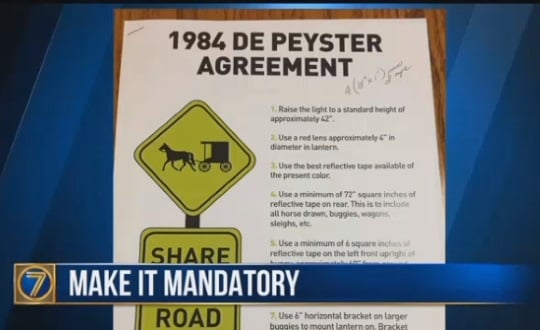 The reporter in the video says that these agreements “sometimes [have] been adhered to, but sometimes not.”

It seems that in the eyes of local authorities, the time for such free-will deals is over:

Frary’s resolution is not seeking another voluntary agreement. Instead, the resolution urges the state to change motor vehicle regulations so slow-moving buggies have to be marked the same as others.

The nearby town of Canton also is said to be considering the resolution. It’s not clear which other towns are involved in the effort.

How likely is it that a statewide mandate will be enacted?

Last year saw the adoption of a statewide law requiring buggy lighting in Wisconsin, a state with a similar Amish population profile.

Is the NY legislature more or less predisposed to enact a similar measure? If this effort gains steam, we will find out.

It’s not completely clear what sort of buggy markings the supporters would want, but clearly the state’s plainest Amish communities like Heuvelton would be most affected.

I can say pretty confidently they’re not going to get the area’s Amish to adopt the traditional slow-moving vehicle triangle and electric light setup featured in the above video as one of the “better-marked buggies” on the road.

But, is there an alternative the plainest Amish would consider?

Last year, Amish in the Lodi, Ohio settlement responded to a spate of road accidents by testing an unusual array of visibility features.