Isaac penned 2 dozen books and many columns, before passing away in 2008.  Osiah has kindly taken some time to answer questions today about Old Order Mennonite life and his father’s work. 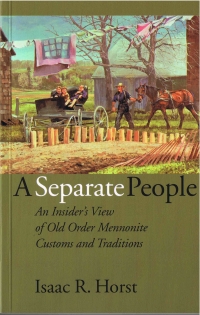 Osiah has also provided 3 copies of A Separate People for Amish America readers.  To enter the giveaway contest, just leave a comment on this post.

For an additional entry, share this contest on Facebook and/or on your own blog (1 extra entry each for a possible total of 3; send a message to amishamerica@gmail.com letting me know you did).

Amish America: Would you mind sharing a bit about yourself–i.e. where you live?  What do you do for a living?  Family?

Osiah Horst: For the past 30 years, we have lived in a (new) Mennonite community in the Ottawa Valley about an hour from Canada’s capital, Ottawa. This is about a 6 hour drive from the Waterloo County area where most Canadian Old Orders live. We are members of the Markham Waterloo Mennonite Conference; we drive black cars, use some technology (restricted access, filtered internet) but our origins, practices, and customs are Old Order. We have a family of six with 13 grandchildren. I have been working as a bookkeeper/accountant all my working years, the past 6 years self-employed.

The rest of the family is horse and buggy Old Order except for an older brother. My mother who is 91, is still living in her own quarters, on the farm where one of her grandsons is farming

Can you tell us a little about your father and his writing?  Was his pursuit of writing accepted in the community?  Is/was he read by other members?

My father was not a farmer at heart and never very successful at it, but as a committed OO, farming was almost mandatory. He normally had some off farm job to make farming possible. Farmland was more expensive in the Waterloo County area due to pressure from the OO community so shortly after they were married, he started looking for less expensive farms in areas forty to fifty miles away. However, as a committed OO, he would not buy land and make a move without support from his church community. The move to the Mount Forest area finally took place in 1968, more than twenty years after he started his search for land. 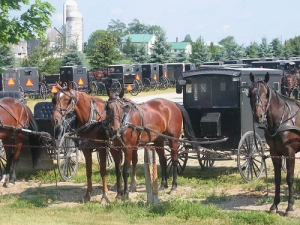 Ontario is home to a sizeable population of Old Order Mennonites

My feeling is that his status in his community did not improve with the start of his writing. Would a writer of books be any better than an unsuccessful farmer in a community where hard work and financial success defines the person? Anyone who shared his love for history read first his historical articles in the Pathway Publications and then also his earlier books. One of the reviewers of the book is a younger Old Order from his home community of Mount Forest. In time, more people did read his books, although I believe they were more popular in the U.S. Mennonite communities than at home. After all, “a prophet is without honour in his own country” or “can any good thing come out of Nazareth?”  There seems to be a renewed interest in his work since his death.

My father was always sought out by people wanting help in tracing their family trees or just wanting to tap into his vast knowledge of the more recent history of his people. He also did considerable translation work, translating letters from the German script to English. One of his projects was translating David Beiler’s book Das Wahre Christentum. His masterpiece though, was translating and typing the 1,100 page collection of letters collected by Minister Jacob Mensch from Franconia during the late 1800 and early 1900. This work, which was done as a labor of love and not for compensation was completed over a twenty year period, ending about five years before his death.

How would you describe his book A Separate People?  What type of reader is it intended for?  What will readers learn from the book?

One of the reviewers, Lorna Bergey, put it this way: “I highly recommend this book to the inquiring public.” Mennonite historian Amos Hoover, a friend and at times co-worker of my father is quoted “Useful. Interpretive. Defends OOM faith and lifestyle.” Rather than try to put too much in my own words (after all as his son, I am both proud and a little embarrassed) I will quote John L. Ruth’s words in his book review.

“This loquacious book by an elderly horse-and-buggy Mennonite of Ontario welcomes the curiosity of anyone from nosy tourists to liberal cousins. Horst’s method, knowing what people are likely to ask, is to pose both questions and answers. His chatty dialogue takes readers vividly into meetinghouse, schoolhouse, and farmhouse, where he cheerfully points out the colorful, nonstandard features of his people’s behavior.

Where it suits, he’ll quote Tertullian or an Anabaptist author to show how traditional Mennonites see themselves trying to live by pristine Christian standards. When no other rationale for a practice seems evident, he’ll simply concede that it’s ‘tradition.’ The folkways of his spiritual family witness to the ideals of the Mennonites of eastern North America before the majority of them made large concessions to modernity. –John L Ruth, Mennonite Church Historian, Harleysville, Pa.

The book’s sub-title is “An Insider’s View of Old Order Mennonite Customs and Traditions” and it is just that – one person’s viewpoint. It is not intended to cover the history of these people nor is it a truly definitive work explaining or defending all of the customs and traditions of this one group. It is however, a good and interesting read for anyone who wants to gain some understanding of the OOM.

What do Old Order Mennonites and Amish have in common?  What differentiates them?

OOM and Amish have very similar beliefs; both use the Dordrecht Confession of Faith. The biggest difference is in the application of shunning. One of the major causes of the Amish/Mennonite split in 1693/94 was the shunning issue. There are many smaller differences; one of the most noticeable is in the wearing of the beard. There are very few OOM groups where the men wear the beard whereas all Amish, including Beachy, do. I enjoy Mennonite history and sociology and since more is written about the Amish than about the Mennonites, I read the Amish materials in an attempt to understand Mennonite history and culture. There is enough similarity in the two to make this possible.

You see a lot of variation among Amish when it comes to what technologies are accepted.  What variation is there among Old Order Mennonite groups? 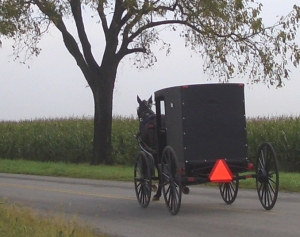 As with the Amish, the buggy is symbolic of Old Order Mennonite society

There is almost as much variation among OOM as there is among the Amish, with one exception. At the most liberal level, they all become Mennonite. Most of my father’s church fellowship accepts electricity, telephone and rubber tired tractors for field work. There are several groups of OOM in Ontario, Pennsylvania, Virginia, and Kentucky who remain much more traditional in their way of life.

The vast majority of Amish refuse the phone and public electricity in the home.  Yet as mentioned above many Old Order Mennonites accept both, and still seem to be rapidly growing and thriving like the Amish.  Are Amish being overly cautious about these technologies?

As a member of an OOM group, I would not want to accuse/judge or whatever, any other group of being too cautious. None of us can, from a purely Biblical standpoint, argue that our ways are best. However, Amish historian, Alvin Beachy was quoted as saying that “wherever a Beachy church started up, it became a bridge from the OO Amish to the larger society.” I believe there is a lot of truth to this so the more traditional groups are farther away from the road of accommodation, acculturation and eventual assimilation. All plain churches seem to have one thing in common, fighting the drift away from what we used to stand for. As a computer user and a restricted user of the internet, I see the dangers of unrestrained use of these technologies and yet, to me the computer is as significant a tool in my trade as is the tractor is for the farmer.

What are common misconceptions people have about Old Order Mennonites?

On another forum, “MennoDiscuss” I have seen questions like “are the OOM born again?” OO people are accused of being “works Christians” because of our customs and traditions. Yet we do not believe or teach that they are the way to salvation but are only ways in which we try to live faithful Christian lives.

What are the most pressing current challenges facing Old Order Mennonite communities? 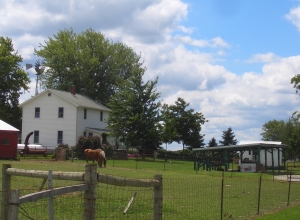 The existing OO communities are facing tremendous pressure on land prices so one of the biggest challenges is buying farms where they can continue their farm based lifestyles. Another challenge is how to maintain OO practices while making a living off the farm or in farm based shops. Governments continue to push socialist programs while they want to be free from government handouts.

What do Old Order Mennonites think about more progressive Mennonite groups?  To what degree do they interact and cooperate?

The OO Mennonites financially support Mennonite programs such as MDS and MCC. In turn, they have looked to progressive Mennonites for help in dealing with government. They still interact extensively in the community and church functions. There is considerable freundschaft connection still, in particular at funerals.

What roles do women play in Old Order Mennonite homes and communities?

OOM women are probably slightly less involved in business and the church than OO Amish. Very few OOM married women run their own businesses, although singles do. They are, to a large extent, involved as partners on the farm. Women do not nominate candidates for ordination like Amish may. In the home, the roles are very similar to their Amish sisters. In my biased opinion, both Amish and Mennonite women are more “liberated” than their Conservative sisters.

Why do you think we have a proliferation of novels, television programs, and websites about the Amish, but much less attention paid in popular culture to Mennonites?  Do you mind being relatively “overlooked”? (tongue-in-cheek question!)

Here I would quote Phyllis Pellman Good (What Mennonites are Thinking – 2000): 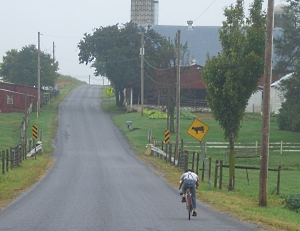 “I think of us Mennonites as a rather muscular group – small, scattered, varied but still making some difference in the world. So I was a little sobered the other night while watching Jeopardy on TV. I had just remarked about how intelligent the contestants seemed. But they all got stumped on the next question. The category was “Protestantism.” – The question was “the group related to the Amish, named for one of their leaders, a Mr. Simons.” None of the three players knew the answer. Kind of humbling, kind of funny.”

She goes on to say that “we (smug) Mennonites know why. If the Amish weren’t so visually obvious, they would be no-names too.” (also tongue in cheek.) There are obviously more Amish than OOM and spread over a wider area so they are better known. We get quite used to being asked if we are Amish. And in the end, I am not sure how much I would like “Mennonite” and” Harrison Ford” said in the same breath. Being overlooked has its benefits too!
——-
To order A Separate People, you may contact Osiah directly at obhorst@mwpol.ca, or by writing to him at:

The price is $10 plus postage (plus GST in Canada). They are also available on ebay.

Read more on the Mennonites and Amish in Canada, or on Ontario Mennonite & Amish furniture.