A reader shares a photo of an Amish-owned business in the Shipshewana area of northern Indiana. 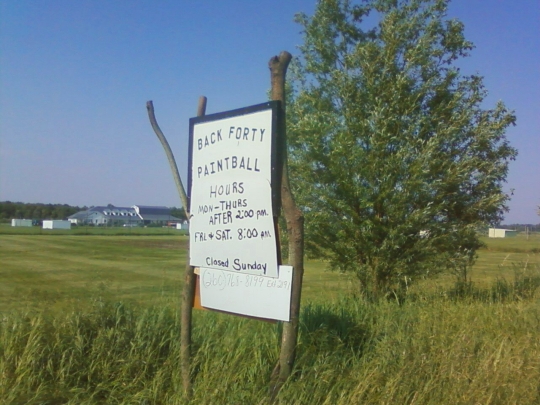 Is paintball popular among young people in this community?  I’ve heard of paintball guns being used by Amish youth before, notably in a tragic incident involving Amish teen pranksters in Ohio.

This isn’t the only sports facility owned by an Amish person.  The 850 Center is another notable one in this same community. It’s been described as an “Amish YMCA”.  Apparently there are replicas of it in other settlements.

Sports are a subject where you’ll find mixed opinion among Amish.  For some, sports and games are worldly and primarily for children.  Others see sports as favorable to “alternative” youth activities.  Idle hands, as they say.

I tried paintball in my younger days, a couple of times.  I found it sweaty, uncomfortable, and not nearly as fun as a young man might wish it to be.   Those paint pellets are as hard as rocks when they hit you.  Maybe it’s just a relatively benign way of working out adolescent aggression.

For the Amish however, paintball does seem a step beyond softball or basketball.  I could see an Amish parent supporting youth sports, but not being as thrilled with this one.