The copyright for an Amish-created quilt design has been acquired by a Lancaster County retailer called Almost Amish, and they are enforcing it.  From the Lancaster Online article:

From now on, Light in the Valley, a quilt pattern that creates an optical illusion that lends it a three-dimensional effect, can no longer be quilted.

That particular pattern has been copyrighted, and Almost Amish, the company that bought the copyright, has sent letters from its attorney to representatives of Lancaster County quilt shops and nearly every volunteer fire company here that hosts a mud sale, telling them to cease and desist selling that quilt.

The Light in the Valley quilt (Google search for an image) is a design with a 3-D effect which was created and copyrighted by an Amish woman named Mary Beiler, who later sold the copyright to Almost Amish.  While Beiler did not enforce the copyright, Almost Amish’s owners Ken and Sally Treadwell intend to do so:

“We have stopped numerous people from selling and making this quilt,” Treadwell said. “We have an attorney that has informed the Mennonite Central Committee that they can’t sell it anymore.”

On hearing the news, one local quilt retailer was “shocked”, saying “I don’t think it’s something a Christian would do.”  Owners of non-Almost Amish Light in the Valley quilts don’t sound happy either, as they apparently can’t be sold.  For similar reasons, people involved in mud sales also sound annoyed:

“I think it’s a bunch of bunk,” said West Earl Fire Company mud sale chairman Wesley Martin. “For us, as a fire company depending on donations and things from our personnel who want to help, it’s not the most pleasant way to help.”

I asked Amish quilt historian Janneken Smucker her thoughts on the issue.  Her response:

Protecting a pattern by enforcing copyright is very unusual in the Amish quilt industry, since taking legal action runs against the grain of Amish humility and is usually not allowed under the Ordnung.

Historically, quilt patterns have been shared freely among community members. Prior to the advent of the booming commercial market for quilts, friends, neighbors, and relatives borrowed and adapted one another’s quilt patterns, with particularly gifted designers receiving requests for patterns or pieced tops. Trendy patterns spread throughout given settlements. This continues today, with an eye toward which patterns are most popular among consumers.

Quilt entrepreneurs want to make quilts that will sell, and enforcing copyright certainly is a way to protect one’s design. Many of the quilts sold in Lancaster County are based on commercially available patterns, which by law are protected by copyright, but rarely has this copyright been enforced.

The “right” thing to do?

I can understand why someone would want to protect ownership of a unique creation.  As Will Hutchinson, assistant chief of the Strasburg Fire Company says in the story, “The Almost Amish company, in a way, is protecting people’s creative rights.”

When I was researching my Amish business book, I remember one Amish furniture craftsmen who expressed annoyance at having his designs copied by others. Legal action is not the Amish way, so he had little option other than to be annoyed. This company is Almost Amish, not Totally Amish, so different rules are in place. 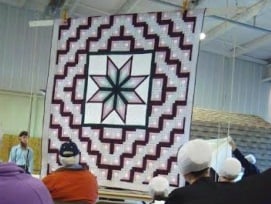 Benefit auctions may be inconvenienced by the copyright enforcement (pictured: not a Light in the Valley quilt)

My thoughts after reading the story was that this would generate bad press (most of the comments in the story are negative towards Almost Amish, as are most reader comments).

At the same time, it is one way to draw attention to your business, intentional or not. I was not aware of a pattern called Light in the Valley before this…now I am.

A year from now when this story is forgotten, people wanting this pattern will have only one place to go.  This may set an example for creators of unique quilt designs in future, though an owner of Almost Amish doesn’t seem to think so.

Many other unique creations are copyrighted and patented, after all, including inventions created by Amish people.  Maybe this is just the next step in the commodification of Amish quilts.

However the fact that this is an Amish quilt and not an obscure widget may place it in a different category for some.  Quilting is symbolic of the Amish.  It’s traditionally a communal practice, and both quilts and their designs have been passed down from one generation to the next.  Like the Amish practice of transferring farmland over generations, Amish quilting has a flavor of stewardship over ownership.

Additionally, the fact that these are non-Amish people who now hold copyright to an Amish-created design (even though it was copyrighted and then freely sold by an Amish person) may rub some the wrong way–all the more so given the emotional weight attached to Amish quilts.