Bonnet Strings: An Amish Woman’s Ties to Two Worlds is the new memoir by Saloma Miller Furlong.  You might know Saloma from her blog, previous book Why I Left the Amish, or more recently, from the PBS film The Amish: Shunned.

In today’s interview, Saloma discusses topics including Bonnet Strings, her former community, and The Amish: Shunned. 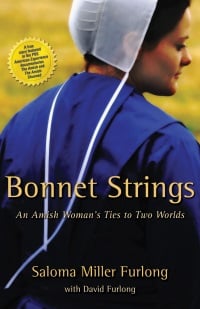 Saloma and Herald Press are giving away two copies of Bonnet Strings for Amish America readers.  To enter, leave a comment or question on this post.

Amish America: For readers who aren’t familiar with your back story and your first book, can you share a little about that?

Saloma Miller Furlong: Yes. Why I Left the Amish begins with an unanticipated break in my studies during my first semester at Smith College in 2004 when my father died and I traveled back to Ohio to my childhood community for his funeral. Finding myself back in the horse and buggy world I had left twenty-four years before, and then suddenly back on Smith College campus in a matter of forty-eight hours left me reflecting on the two separate and distinct lives I have lived.

I use the narrative present to tell the story of my childhood and young adulthood in my Amish community in northeastern Ohio. Mine was not the idyllic childhood that many people think of when they think “Amish.” I had a father with mental illness, a brutal older brother, and a mother who did not always protect me.

In addition to the adversities I faced in my childhood, I also found that my inquisitive nature was a mismatch with the culture that I was taught I could never leave. I questioned the Amish ways, even after I joined the church and was baptized.

The last part of Why I Left the Amish chronicles my journey out of the only community I had known, to a place where I knew no one.

How does this book fit with your first?

Saloma: Bonnet Strings: An Amish Woman’s Ties to Two Worlds continues the story I started in Why I Left the Amish. When I landed at the YWCA in Burlington, Vermont, I reveled in my newfound freedom, established a social life, and began dating. I met a Yankee toymaker and peddler, David, who was eager to learn everything he could about the Amish, and he was willing to help me sort out the complexities of my new world. 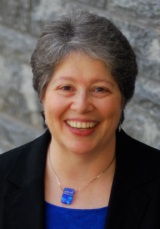 Then one Friday night, my freedom came to an abrupt end when a vanload of Amish people showed up at my front door to bring me back into the fold. I could not resist the overwhelming presence of the bishop and others, and so I returned to Ohio with them. Thus began a long struggle of feeling torn between two worlds: should I remain Amish and embrace the sense of belonging and community my Amish life offered, or should I return to the freedom I had experienced in Vermont?

Upon my return, I settled into teaching in an Amish school and did my best to fit back into Amish ways, but a legacy of childhood abuse and questions of identity plagued me. My ties to the outside world remained, especially through the quiet perseverance of the toymaker from Vermont. I kept telling him that a romance is impossible because “I’m Amish and you’re not.” Yet he kept sending me cards, never giving up hope that our love could survive the strain of living in two different worlds.

We’ve looked before at what the term “Amish” means.  You describe it as not just a religion and way of life, but a way of thinking and being. What do you mean by that?

Saloma: There is a passage in the book that makes an attempt at describing what I mean by a way of thinking and being. I was contemplating the question a Vermont friend had asked about which world I was happier in. 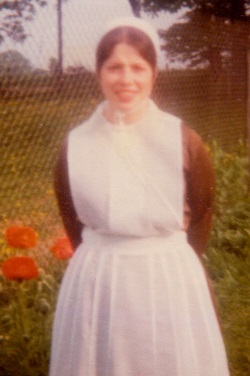 If I looked at it purely from my own point of view, then the answer was clear: I was certainly happier in my Vermont world. My freedom was about me as an individual. But Amish people carried a sense of duty or obligation for the community as a whole that other people didn’t understand. To be born and raised and then baptized into the community was a covenant not to be taken lightly. Being back in my Amish world was about community and something greater than myself, and it didn’t have to do with my personal happiness.

Can people who are no longer in an Amish church still be Amish?

Saloma: According to Amish teachings, the answer is no. We were taught that you are either Amish or not… there simply is no in between. I used to fight against this notion, thinking that I have the best of both worlds — I have a lot of Amishness in me, and yet I don’t have to be restricted by their Ordnung. But I have actually come around to agreeing with the Amish teachings. Those of us who leave have to suffer the loss of our people and community. Being Amish separate from the community is pretty much impossible.

And yet part of me will always be Amish. I imagine it is much like being an ethnic Jew, though not a practicing one.

What has the reception been like for Bonnet Strings?

Saloma: I would never have guessed how positively people are reacting to this second book. I’ve gotten many comments through social media and emails. People relate to my book in ways that I could never have imagined. Even close friends who were strangely quiet about my first book are raving about the second one. I’ve been told that I’ve progressed in my writing style between the two books. I have to give a lot of the credit for that to Valerie Weaver-Zercher, who helped me shape Bonnet Strings into what it is. 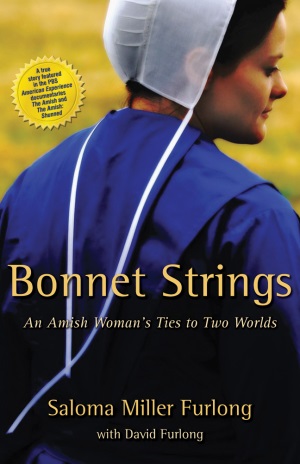 Perhaps the most gratifying response comes from my sister, Sarah. She was hurt by some of the things I wrote in my first book, to the point that it took her two years to come around to wanting to talk to me again.

Two nights ago, she and I had an hours-long conversation that touched on philosophy, family relations, and other topics. She raved about Bonnet Strings, and says she could not put it down. Because I did not actually expect that anyone in my family would approve of the book, this came as a pleasant surprise.

As you note in your introduction, there is a lot of diversity across the over 460 Amish settlements today.  What are some things people might find interesting about the Amish of Geauga County?

Saloma: Many people do not know that the Geauga County community is the fourth largest Amish community. They are of the lesser known Amish, partly by choice. When I was growing up, they often used the Lancaster community as an example of what they did not want in terms of tourism. They felt that the Amish in Lancaster had “sold out” their religion and way of life. 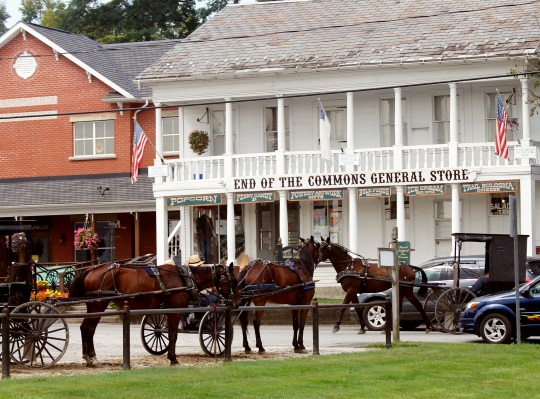 What was the experience of participating in The Amish: Shunned like?

Saloma: To quote Levi Shetler, “It was pretty awesome, actually.”

I already had a working relationship with Callie Wiser from the first film The Amish, so this seemed like a pretty natural progression. Callie has a way of bringing out the essence of people’s stories and portraying them in meaningful ways. She did a really good job capturing the poignancy of each of the people’s stories she told. I am honored to have been a part of both films.

In the film your story is intertwined with that of Anna, who comes to live with you after leaving her community. How would you describe the role you played for her?  Why do you think Anna eventually returned to her community?

Saloma: My husband, David, and I gave Anna a place to live, and helped her start a bakery and basket-weaving business out of our home. We basically became her surrogate parents.

With a close viewing of the film, a person can see the signs that Anna was having a hard time making the transition into the mainstream culture. She came from the strictest of the strict — in fact the strictest of the Swartzentruber divisions. There were very few choices she could make for herself, because so such was determined by her church Ordnung. The cultural divide was just too wide for her to traverse. Also, the homesickness she was experiencing was pretty intense. Anna was the favorite aunt of her forty nieces and nephews and she missed her family. She could not sacrifice her community to have personal freedom.

What has been the hardest of all is that Anna is not allowed to write to us. Having lost all contact is heart-wrenching.

Update: I attended Saloma’s talk in Asheboro, NC last night (March 27).  She had quite a nice crowd, I’m guessing 80-100 people? Below, a couple of shots from my tablet camera of Saloma and David during the talk and afterwards.  They got a lot of questions as you might expect.  A very nice evening and audience. 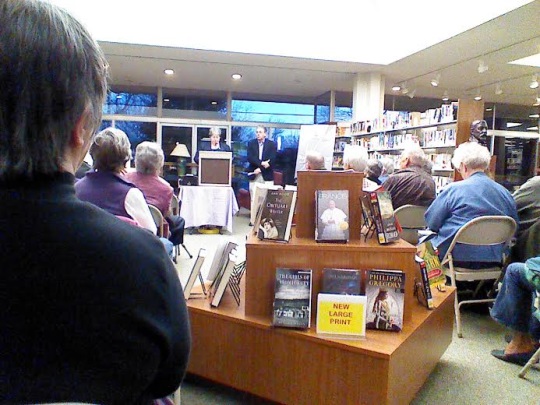 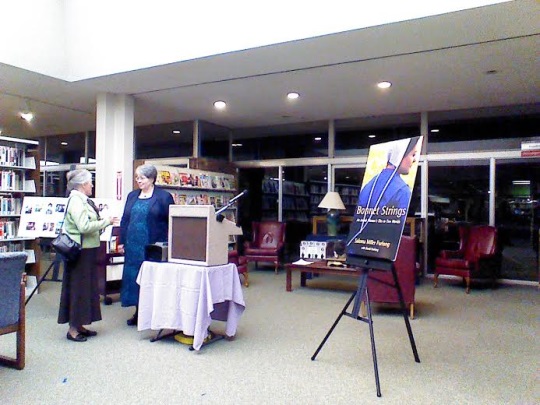