Grounded Upon God’s Word: The Life and Labors of Jakob Ammann is a new book by co-authors Andrew V. Ste. Marie and Mike Atnip. Ammann was the early leader of the Amish, for whom the group is named.

For many years, little was known about Ammann, though in recent decades fresh research has revealed more about Ammann’s personal life beyond the schism which created the Amish and Mennonite factions of the Swiss Brethren. 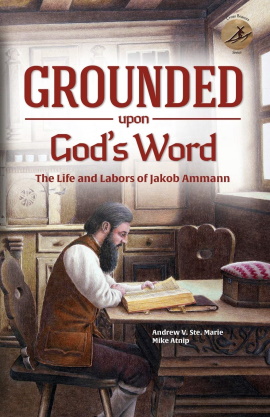 Joseph Stoll, Amish co-founder of Pathway Publishers had this to say about the book: “We welcome this fresh and factual biography of Jakob Ammann. His life story is worth reading, and we can learn from Jakob Ammann’s unswerving vision of a holy and disciplined church of Jesus Christ.”

Today Andrew V. Ste. Marie has kindly agreed to answers some questions about Ammann’s life and legacy. The authors have also offered a book for giveaway to an Amish America reader.

Win a copy of Grounded Upon God’s Word

To enter to win a copy of Grounded Upon God’s Word, simply leave a comment on this post. I will draw one winner at random and post it here next Tuesday.

Q & A with Andrew V. Ste. Marie on Grounded Upon God’s Word: The Life and Labors of Jakob Ammann

Amish America: Who was Jakob Ammann?

Andrew V. Ste. Marie: Jakob Ammann (1644-c. 1730) was a leader among the Swiss Brethren Anabaptists, and was a leader in the first major schism among that group, resulting in its division into two groups, known today as the Amish and Mennonites. The Amish group was so named after Jakob Ammann.

Ammann was raised in the Reformed state church and joined the Anabaptists in his 30s, and at some point (probably soon after joining the Anabaptists) left Switzerland and moved to Alsace, France, where Anabaptists enjoyed greater religious toleration. 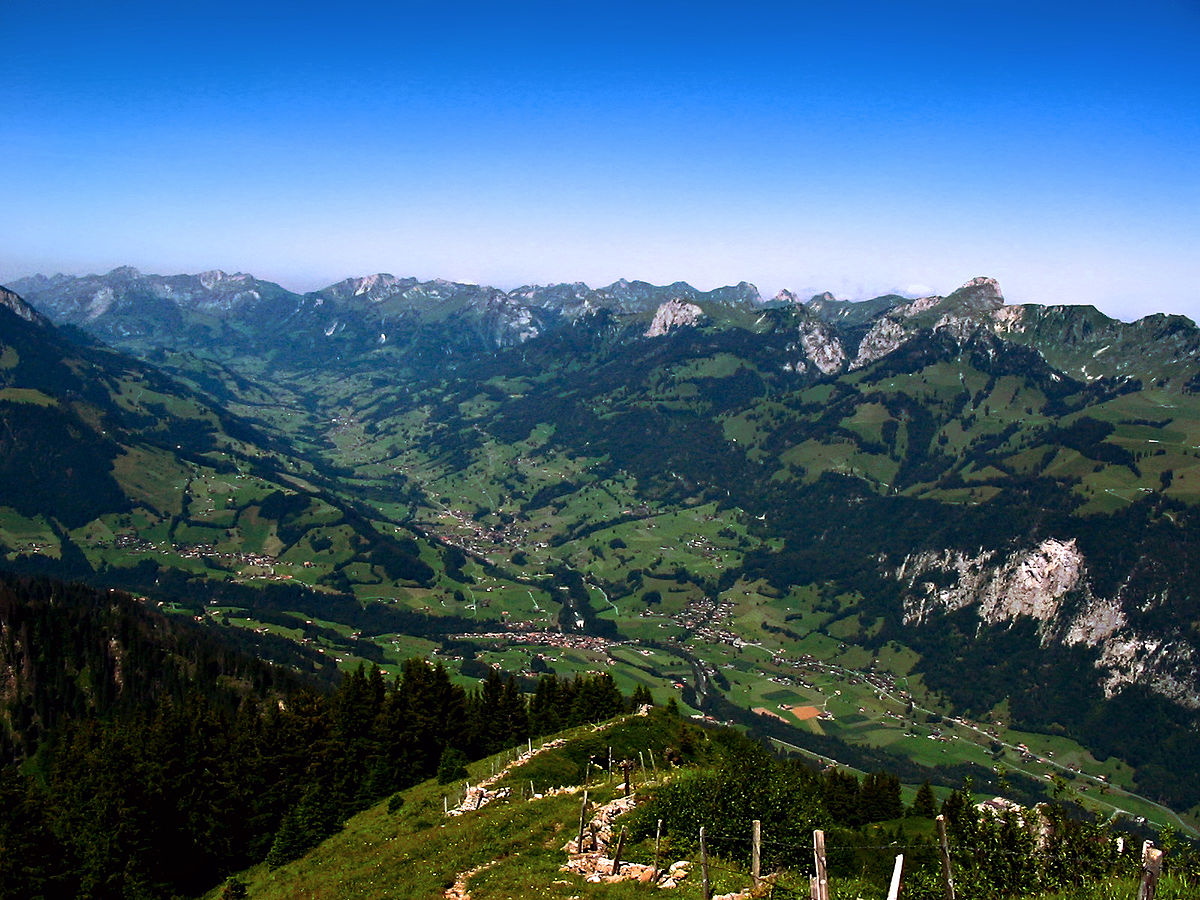 Amish America: How do perceptions of Jakob Ammann differ today?

Andrew V. Ste. Marie: Many misconceptions about him circulate today. I have heard bizarre retellings of the Amish/Mennonite schism, many of which feature Jakob Ammann dividing from Menno Simons (the two actually lived decades apart) over such issues as beards and buttons (neither of which featured in the actual debates at the time of the division).

Additionally, the idea persists that Jakob Ammann was a harsh, unreasonable, and impatient man who provoked a division in the Swiss Brethren Anabaptist community by his authoritarian actions. Recent research—upon which our book is based—takes a more nuanced approach, seeing Ammann as a man who tried patient means of resolving differences in views between various Swiss Brethren groups, but who ultimately succumbed to impatience under the stress of being “wanted” by a persecuting government and dealing with people who were acting very uncooperatively.

What were the main issues in the schism?

The dispute began in 1693, between Ammann and some of his co-ministers from Alsace, France, and Anabaptists living in Canton Bern, Switzerland. There were three main issues at the beginning: 1) the state of the Truehearted (explained below), 2) whether liars should be excommunicated from the church, and 3) how those in the church should relate to those who had been excommunicated. 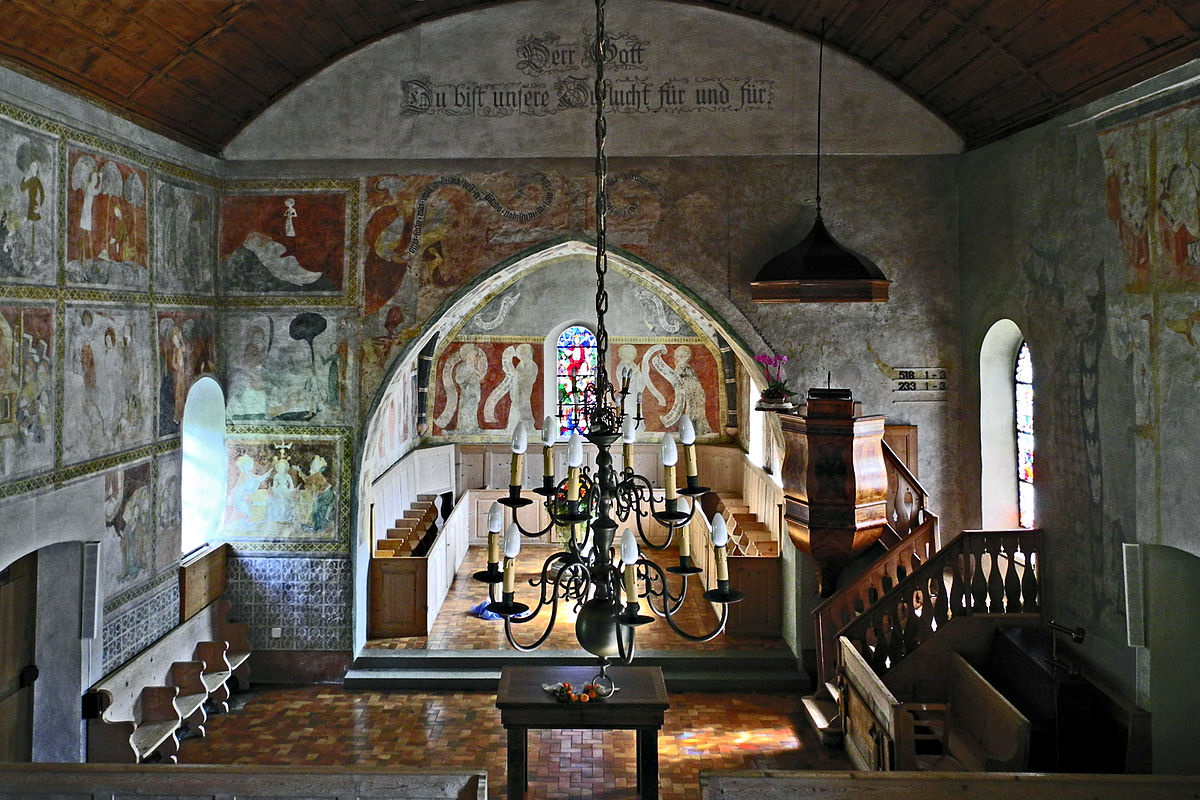 Erlenbach church, where Ammann was baptized as an infant

As time went on, the dispute came to focus exclusively on the issue of shunning. Amish and Mennonites differ on this point to this day.

Who were the Truehearted and what was their importance?

The Truehearted (also called half-Anabaptists) were members of the Protestant state church who sympathized with the Anabaptists to various degrees. Some gave aid to the Anabaptists, such as warning them of authorities approaching to arrest them or providing hiding places for them. They were very important allies for Anabaptists as they sought to survive in hostile Canton Bern.

Some Anabaptist ministers in Canton Bern, appreciative of the Truehearted’s contributions to their safety, told the Truehearted that they could be saved even though they did not join the Anabaptist church through believer’s baptism. Jakob Ammann, himself a convert from the state church, insisted that expressing such sentiments was out of order. The Truehearted should be encouraged to commit themselves fully to following Christ and carrying His cross, including receiving believer’s baptism, before they could be comforted with the hope of salvation.

What are some of the biggest unknowns about Jakob Ammann that you wish we had answers for today?

The two biggest unknowns in the main outline of his life are 1) his conversion to Anabaptism—how he became interested in Anabaptism, how and why he decided to convert, who baptized him, etc.; and 2) the time and location of his death. 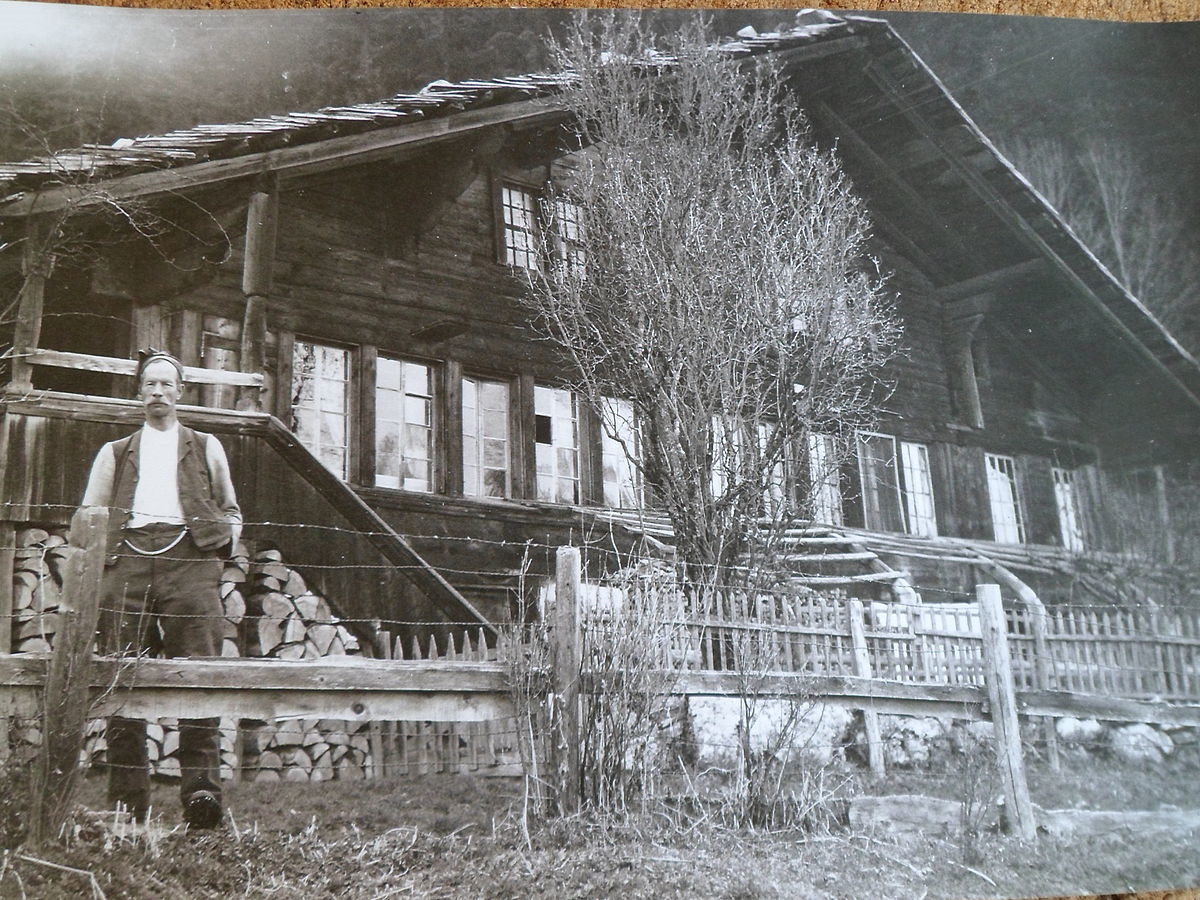 Photo of what may have been the Ammanns’ house

Beyond that, the unknowns of his life are best underscored by a piece of information which I read about and was able to include in the book just as it was about to go to the printer. In 1665, Ammann’s wife was reprimanded and fined by the Chorgericht (morals court) of the Swiss town where they lived for carrying hot coals through the streets in an improper container. While this underscores how seriously early Modern Europeans took fire safety, it is also the kind of human interest story which underscores just how little we actually know about the Ammanns’ lives. We may know the main outline, but much of the human color has vanished.

What are some of the more surprising things you discovered in researching and writing this work?

One thing was the town of Ammann’s residence in Alsace, named Ste. Marie-aux-Mines. Several people have asked if my name has any connection with the town. It does not (Ste. Marie is simply the French spelling of Saint Mary), but it still feels like I have a personal connection to the story! 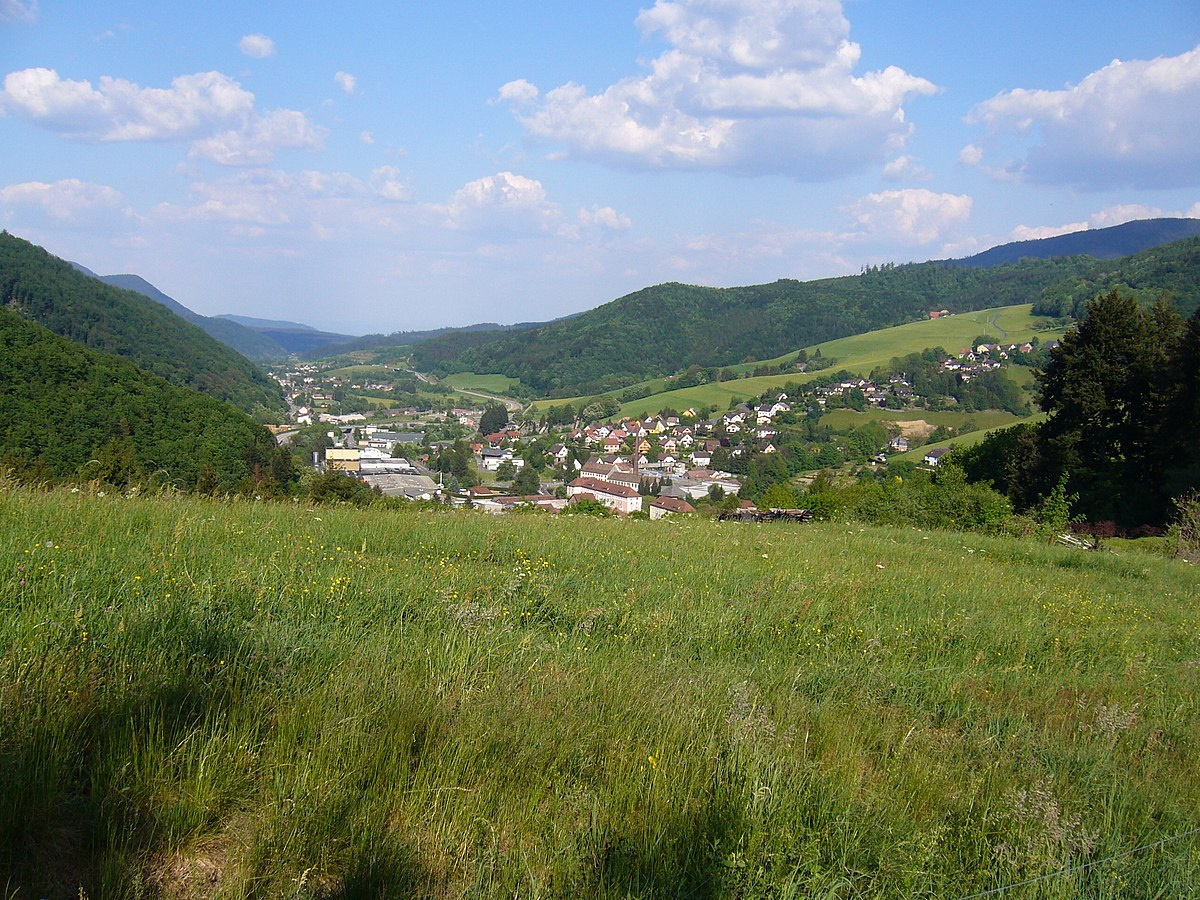 What was life like for Ammann and his followers, following the schism?

Many of those who followed Ammann lived in Alsace, France, which offered some degree of religious toleration. In Ste. Marie-aux-Mines, the Anabaptists (Amish and non-Amish) had restored the land to productivity after it had fallen into disuse and disrepair following the Thirty Years’ War (1618-1648). Since they made up a significant proportion of the population and paid a proportionate amount of taxes, the non-political Anabaptists, ironically, had a significant influence on the local government. When Jakob Ammann asked the local authorities for something, they were generally quite willing to oblige!

What do we know about Ammann’s family?

Jakob was the third of six children born to Michel and Anna Ammann. Michel went on to convert to Anabaptism, as did Jakob, his younger brother Ulli, and probably one sister.

Jakob married Verena Stüdler before joining the Anabaptists. We know they had at least one daughter, although the details of their family are obscure for two reasons: 1) if an Anabaptist refused to have his child baptized, there would, of course, be no official record of that child in an age before birth certificates; and 2) Jakob had an uncle of the same name living in the same town, and it is difficult to tell in some records which Jakob is meant!

Are there any known descendants of Ammann?

No. The Ammann name died out among the Anabaptists, although if Jakob had daughters who remained with the Amish, it is possible that he does have Amish descendants under different last names.

Why did you decide to write this book?

The first Anabaptist church I was part of was composed mostly of people from an Amish background. I heard stories about Jakob Ammann—such as the true story of him excommunicating seven ministers in one meeting in a barn—for the first time from them. His mysterious and shadowy nature intrigued me greatly, and I found him an interesting person to research as I delved deeper and deeper into Anabaptist history. As I started to write about Anabaptist history, Ammann seemed like a natural subject to write about. His mystique, however, has never disappeared for me.

What is Jakob Ammann’s legacy?

His most visible and recognizable legacy is, of course, the existence of the Amish church. To me, though, his legacy is in his steadfastness for truth and his willingness to repent and admit when he was in error, seeking reconciliation (sadly, unsuccessfully) with those he had earlier disagreed with. 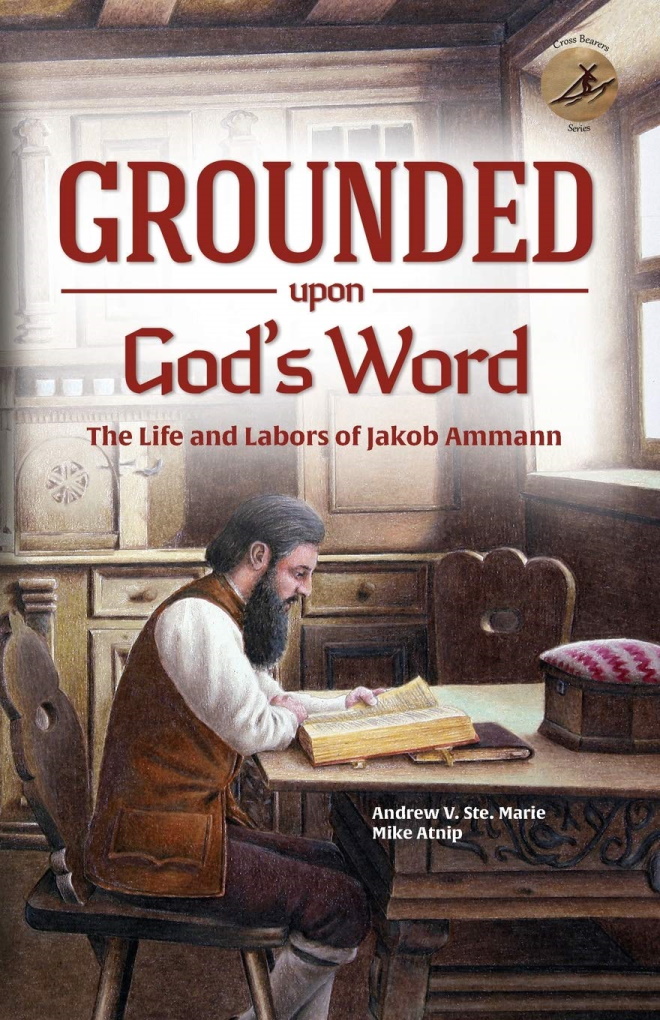 Where is your book available?

The book is available on Amazon, Barnes & Noble, and the publisher’s website, Sermon on the Mount Publishing. It is the third volume in the Cross Bearers Series, which also features earlier Anabaptist leaders Conrad Grebel and Michael Sattler.

Readers interested in following my continuing research and writing are encouraged to sign up for my free e-mail newsletter here.

Thank you to Andrew for this insightful interview. Don’t forget to enter to win by commenting below, and check back here for the winner next week.