Two volunteer firefighters have been charged with arson in the burning of an Amish furniture shop in Pennsylvania.

The community in question is Smicksburg (Indiana County), one of the larger settlements in the state. Byler’s Custom Built Aspen Log Furniture burned down in a fire back in January.

This was one of four Amish business fires which I noted at the time had happened in a span of about two weeks. 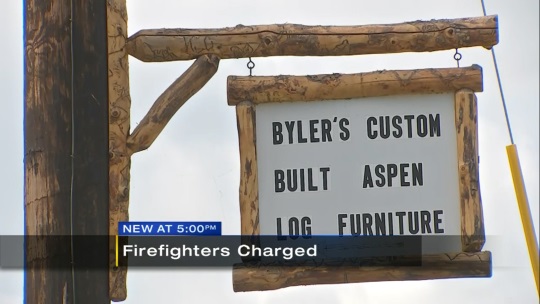 I have to admit when I saw “volunteer firefighters” and “Pennsylvania” in the headline, I feared that this might be a case of Amish youth gone wrong. Young Amish people frequently volunteer in fire companies particularly in Lancaster County.

But going by the last names, it seems these are non-Amish suspects – two men ages 19 and 22.

One of them admitted to the pair throwing a Molotov cocktail through the building of Roman Byler’s shop to set the blaze which rapidly “gutted” the business.

Their fire company, Plumville Volunteer Fire Department, ended up responding to that blaze.

There are also 11 other “suspicious” fires in the area dating back to summer of 2018, which authorities are investigating in relation to this case. The WPXI video report gives detail on the case, with comments from State Trooper Clifford Greenfield.

Hard to know what is going on here. You have to wonder what’s going on in someone’s head when a person whose responsibility it is to protect the community from fires, goes about intentionally setting them.

I have heard of some people setting fires and then swooping in to save the day in a falsely-generated hero scenario. Perhaps that is what is happening here.

Fortunately there was no loss of life or injuries. But this is pretty serious business, especially if the pair are responsible for serial arson in this community.

Trooper Greenfield urges support for members of the fire department: “Our local firefighters are going through a really tough time right now. They’re putting their lives on the line, taking away time from their jobs, from their families, to risk their safety for us.”

Unsurprisingly, Roman Byler bounced back – seemingly just a bit slower than the fire which claimed his workshop.

After only about a month had passed, he had already rebuilt the shop, and is back to business.