I don’t how much of an anomaly this might be, but it seems there have been an awful lot of fires striking Amish businesses lately.

In the past few weeks, there have been at least four significant Amish business fires:

Thankfully no one was hurt in these fires. One of these incidents however has come under suspicion of foul play – the fire at the furniture shop in Indiana County:

A state police fire marshal estimated the damage at $50,000 and reported that no one was injured.

The owner, who is Amish, had no electric service to the shop and had left the woodburning stove cold, said state Trooper Russell Stewart, a fire investigator based at Troop D in Ridgeway.

“The fire was incendiary in nature,” Stewart said. “As of right now, some of the evidence I collected and investigated leads to the determination that it was arson.”

In many cases of Amish fires, the source of the flame is the lighting or heating used by Amish, which can be natural gas, kerosene, or other fossil fuels. In this case it looks like that can be ruled out. “Arson” gives this case a much darker tone. No word on suspects yet. 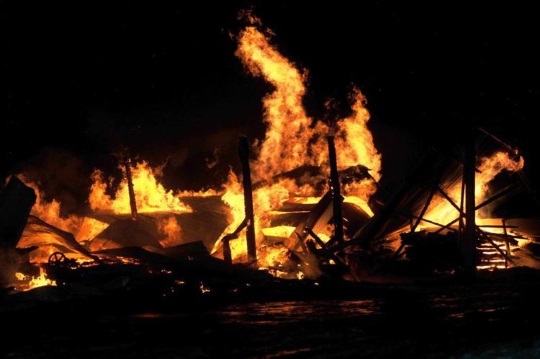 Another point worth noting – in this case, the owner opted to let the building burn – but for a sensible reason:

The entire building, in a 40-by-80-foot frame, Stenman estimated, was ablaze as the first firetrucks arrived and with its fate apparent, the owner asked firefighters to turn off their hoses.

I would assume that was the motivation for the Amish in the Spring Mills case to not call the fire department either. Maybe it seems counterintuitive, but at a certain point, it’s easier to just let the fire finish what it started and start from scratch.

Bad luck, more reporting, or something else?

I don’t keep any statistics, but this seems like a lot of fires. In addition to these four fires in a roughly two-week span, we have seen at least three significant Amish house fires since late autumn, dating back to the tragic Thanksgiving Eve fire in Geauga County, Ohio.

An Amish barn also burned down January 29th in St. Croix County, Wisconsin, after the owner’s attempt at boiling water went wrong. And another Amish workshop burned December 27th in Hammond, New York, with the blaze caused by a motor.

Maybe fires in Amish structures happen at this frequency normally, and for some reason, are just being reported more lately. Or I just started noticing them more. Or maybe it’s a spell of bad luck.

In any case, I don’t recall ever seeing so many reports of fires hitting the Amish in such a short span of time.