An Amish-owned horse decided to go for a little ride with no one behind the wheel, so to speak.

The incident happened Sunday morning in the Holmes County, OH community. From the Wooster Daily Record:

Ohio State Patrol Sgt. C.O. Smith was the one of a a small group of law enforcement officers from the patrol, Wooster Police Department and Wayne County Sheriff’s Office who were called at 7:07 a.m. to corral the animal, which had run 10 miles before being brought to a stop on U.S. Route 250 near state Route 83 and The Ohio State University Agricultural Technical Institute.

The horse was running the wrong way in the eastbound lane when Smith, seeing the reins hanging over the windshield of the buggy, ran alongside it, then jumped in and grabbed the reins, bringing the horse to a quick stop.

The horse was panting and collapsed on the scene, but Smith said was examined by a veterinarian, given some water and was in good health when it was returned to its owner.

Sunday morning (and Sunday in general) is when you have arguably the most Amish buggies on the road, due to community members traveling between home and church.

This could have ended very badly (runaway horses have caused serious accidents, as in this 2013 case in Pennsylvania).

But thanks to the good work of Sergeant Smith, the excursion came to a safe conclusion.

Though the images posted to the Wooster Police Department Facebook page show you how worn out this horse was: 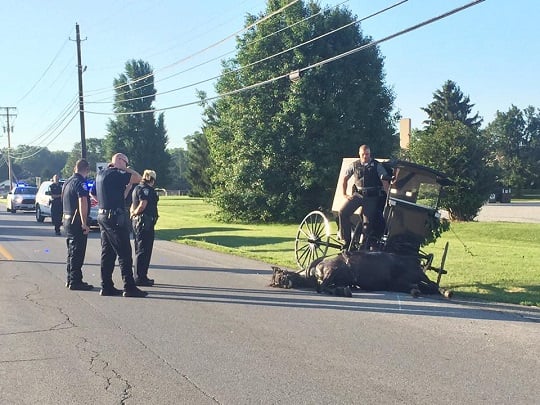 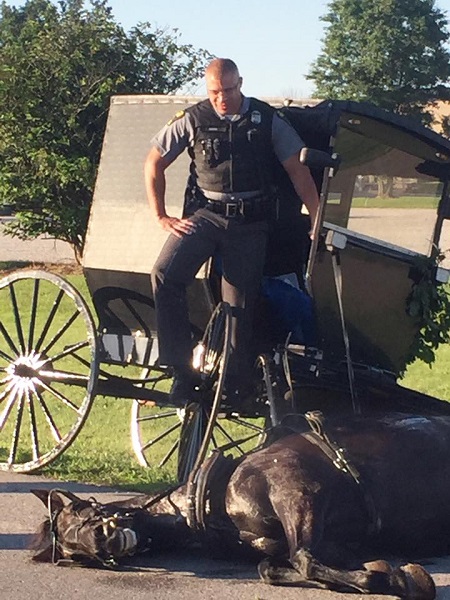