This video is titled “Amish Singing On Amtrak”. The quality is passable though not great. But I couldn’t pass up sharing it. This video combines two themes seen here in recent months – Amish singing and Amish on trains. The men singing do appear to be Amish. I count at least three of them. The only detail the uploader put in the video description is “Amish singing on a train in the late hours of the AM headed to NY.” 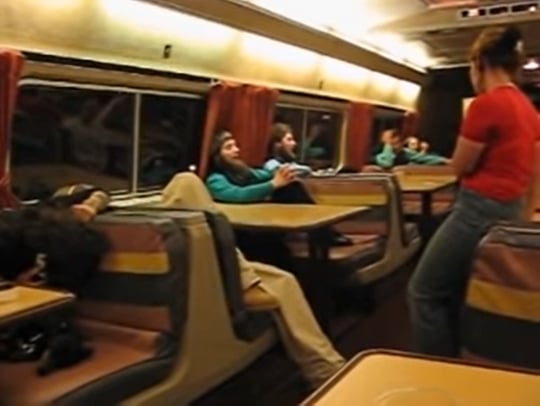 Does “NY” mean NYC or somewhere upstate? Amish do travel to New York City, but it seems it would be odd for them to be arriving in the city late at night. Looking further into the video comments, uploader Tim Livian adds that “This was a stretch from Chicago to NYC.” With that knowledge and going by the look of the men, I would guess they are heading somewhere in Pennsylvania, possibly back home to Lancaster County.

The men’s voices are quite twangy and the song has a country flavor. We hear some crooning and someone tapping out a beat. According to another commenter, the song is country singer Bill Anderson’s “Po’ Folks”. Here are the bits that we hear them sing (full lyrics here):

But we had something in our house money can’t buy
Kept us warm in the winter, cool when the sun was high
For whenever we didn’t have food enough
And the howlin’ winds would get pretty rough
We patched the cracks and set the table with love

Singing is – or at least used to be – one way to pass the time on long trips. This video was shot way back in 2006. Note that would be several years before smartphones began infiltrating our pockets and capturing people’s attention more or less full-time. 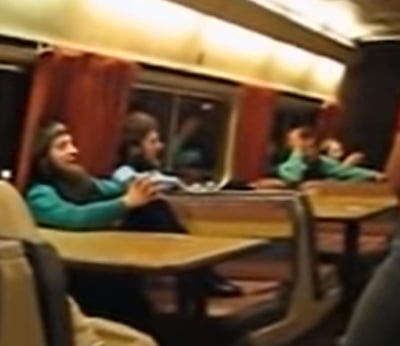 Would people tolerate singing like this in 2020? Or would they scoff at it, an unwelcome distraction from their screens?

Their fellow passengers from that different era seem to appreciate it – breaking out in applause at song’s end.