Suzanne Woods Fisher: The Story of the Red Mutza

In her previous post on the Amish dress code, Suzanne Woods Fisher described some interesting nuances of Plain clothing, and explored the tailor background of Amish founder Jakob Amman. Today, Suzanne tells the story of an unusual coat that crossed the ocean with one Amish immigrant to America.

The story below is excerpted from her new book The Heart of the Amish: Life Lessons on Peacemaking and the Power of Forgiveness.

There is no love without forgiveness, and no forgiveness without love.

Have you ever noticed that the color red is seldom used by the Amish? Not in women’s dresses, nor men’s shirts, nor children’s clothing. Not even in quilts. But it wasn’t always that way.

Hundreds of years ago, a Mutza (frock coat) made of red woven fabric was once considered common for Amish men of Germany to wear—but only to church. Most Amish men have two kinds of coats, each with their own function. The ordinary coat can be used for work, but after a young man is baptized, the Mutza is always worn to preaching service. This garment is longer than the ordinary work coat and has a split tail. Think of it as a suit and tie, minus the matching pants. And the tie. 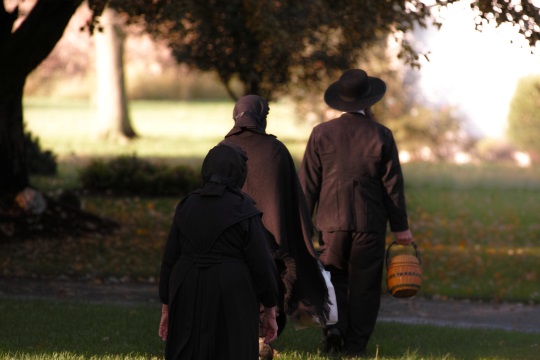 As traditions developed in the Amish church, the color red became frowned upon, then forbidden. In the late part of the eighteenth century, Christian Hershberger was born and raised in Germany, joined the Amish church, and—like so many of his peers—emigrated to Pennsylvania as a single young man. One of the few things he brought with him from the Old World was his red Mutza. Eventually, Christian met and married Barbara P. Beachy of Somerset County, and they settled down in Holmes County, Ohio, to raise their family. He never wore the red Mutza to church, but he never got rid of it either.

Christian and Barbara had a son named Gabriel. After Gabriel grew up, was baptized, and married, he wore the red Mutza to church. The red Mutza raised eyebrows among the Holmes County church, and a ruling was made that men’s clothing should be black or dark blue. Definitely not red. The church decided that Gabriel’s red Mutza could not be allowed.

Gabriel stood firm. It was his father’s coat, he reasoned. A coat that had been worn among the Amish in Germany. A coat with history. He refused to put it away. The church stood firm and would not approve of a red coat for men. So there was a standoff.

Along came communion in the fall. A number of church members voiced their opinion that communion should not be held until Gabriel’s red coat was put away. Gabriel refused to budge. The bishop, a man named Mose Miller, was a peacemaker, known for his patience and love, and he wanted no ill will between brother and brother. He asked the church to be more patient, to allow time for the matter to be peacefully settled, without putting pressure on Gabriel.

In October, Gabriel made it known to the church that he was planning to build a corncrib. In those days, buildings were built like Lincoln Logs, with cuttings of notched logs locking into place with another notched log. It was backbreaking work, doable only with help from neighbors. Then, as now, work frolics were formed among the Amish to help each other with large building projects.

But no one came to Gabriel’s frolic. When the church members were asked to help build the corncrib, they refused to help him. Gabriel wasn’t at peace with the church, they pointed out, all because of that red Mutza. 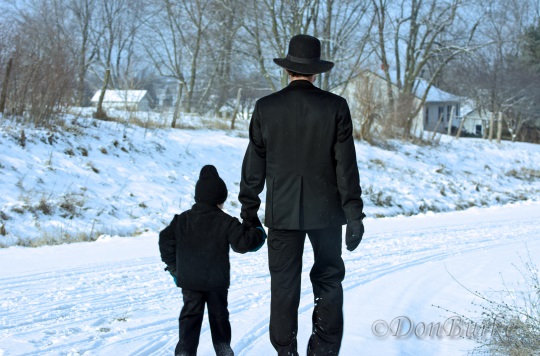 Bishop Mose, a carpenter, lived about two miles away from the Hershberger farm. When he realized that Gabriel would be working alone on the corncrib, he said, “It will not do to be revengeful. We must win people in love and not with hate.”

So Bishop Mose left his work unfinished, hitched his horse to a hack, and took his carpenter tools along to help Gabriel. With high scaffolding, a rope, block, and tackle, the two men pulled each log up to set it into place. Bishop Mose worked side by side Gabriel for three full days, without any help from other church members. He never said a word about the red Mutza or about the festering troubles with the church members or about delaying communion. He just worked alongside Gabriel, as his friend and neighbor.

At the end of the third day, the walls were up, ready for the roof. Gabriel told Bishop Mose that he could manage putting on the roof by himself. Raising the walls had been the hardest part.

So Bishop Mose brought his horse out of Gabriel’s barn to hitch to the hack, ready to get home to the work that was waiting for him. Gabriel helped him hitch up and thanked him for his help over the last three days.

As Mose was about to climb onto his hack, Gabriel stopped him by putting a hand on his shoulder. “I will put that red coat away for good, and come offer peace and love to the church next Sunday. I will not wear that coat again, as an honor to the church.”i

The old people of Holmes County often spoke of Bishop Mose’s example of patient loving-kindness. He won Gabriel over, they said, without one word about his red coat. This, they point out, is what love, rather than revenge, can do to win people as peaceful friends,.Some even wonder what might have been set into motion among the Amish in Holmes County, had Bishop Mose tried to win Gabriel over by force, rather than by love.

“Peace is worth our greatest effort,” Ken Sande writes in Resolving Everyday Conflict.ii The Bible tells us that we should “make every effort to keep the unity of the Spirit through the bond of peace” (Eph. 4:3). The Greek word in this verse that is translated “make every effort” means to strive eagerly . . . earnestly . . . diligently. It’s a word that a trainer of gladiators might have used when he sent men to fight to the death in the Coliseum. “Make every effort to stay alive today!” Peace is worth that life-and-death effort. If we want to enter into all the peace God has for us, we have to give it our all.

We have to give it our red Mutza.

 The story of the red Mutza was originally retold in a letter written by a descendant of Bishop Mose.

This excerpt is taken from Heart of the Amish: Life Lessons on Peacemaking and the Power of Forgiveness. It is printed with permission from Revell Books.

Suzanne Woods Fisher is the bestselling author of ‘The Stoney Ridge Seasons’ and ‘The Lancaster County Secrets’ series, as well as nonfiction books about the Amish, including Amish Peace. She is a Christy award finalist and a Carol award winner. Her interest in the Anabaptist culture can be directly traced to her grandfather, who was raised in the Old German Baptist Brethren Church in Franklin County, Pennsylvania. Suzanne hosts the blog Amish Wisdom, and has a free downloadable app, Amish Wisdom, that delivers a daily Penn Dutch proverb to your smart phone. She lives with her family in the San Francisco Bay Area. You can find Suzanne on-line at www.suzannewoodsfisher.com. She loves to hear from readers!