In today’s guest post, Suzanne Woods Fisher looks at the development of Amish plain dress, and the role played by Amish founder Jacob Amman. As Suzanne explains, Amman would have known something about clothing.

Why do the Amish dress the way they do? Simple clothing identifies the Plain People as set apart, as individuals belonging to a larger whole, the way a military uniform sets apart a soldier. But it might surprise you to learn that distinctive clothing didn’t play a role in the early years of the Anabaptist movement. In order to understand how the “dress code” evolved, we first need to meet Jacob Ammann, the man who founded the Amish branch of the Anabaptist movement.

In many parts of Europe in the 17th century, clothing was regulated by “sumptuary laws,” sets of laws that identified social class and prevented extravagance. As farmers and peasants, the Anabaptists wore simple, practical clothing that fit their status. Strict adherence to distinctive clothing didn’t begin to emerge until Jacob Ammann emerged on the Anabaptist doctrinal scene. And interestingly, Jacob Ammann was a tailor.

Jacob Ammann, born in 1644 in Switzerland, grew up as the son of a tailor. Like most sons of the time, Jacob followed in his father’s footsteps. It’s believed that he converted to Anabaptism in 1679, and at some point became an ordained minister, then later a bishop. Troubled by what he considered overly tolerant views in the church, Ammann stridently advocated for renewal. Those reforms led to a split in 1693, and as the faction grew, his followers became known as the Amish. 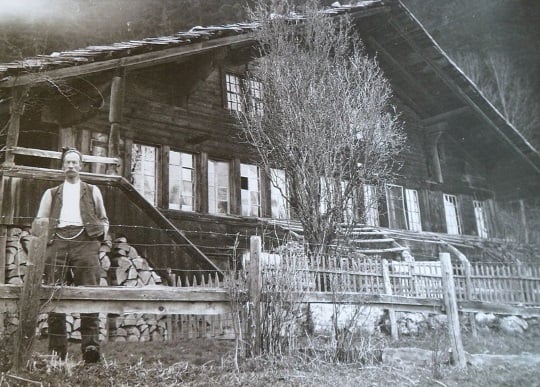 As a tailor, Jacob Ammann would have been very familiar with sumptuary laws. Tailors were obligated to tell customers what kinds of garments they were allowed to wear, and they could be fined if they made clothing that contradicted those laws.

As the leader of the new faction, Ammann enforced the wearing of traditional, simple clothing. He condemned the trimming of the beard and the wearing of fashionable clothing as worldly, and “anyone desiring to do so” he said, “shall be justly punished.” The Amish became known as Häftler (hook-and-eyers) and the Mennonites were the Knöpflers (button people).

And then Jacob Ammann disappeared.

The last he was heard of was in 1712. A few sketchy assumptions linger on about what happened to him: He was expelled from the region in France where he lived. Perhaps he went into hiding to escape persecution. It is known that his involvement in church matters had diminished long before 1712. In 1730, Amman’s only daughter told officials of Switzerland that her father was dead, but the actual date of his death has remained unknown.

Despite a lack of leadership, despite persecution and oppression, the Amish faction continued to grow. It was small, not centrally organized, and scattered in parts of France, Switzerland and Germany.

As the New World beckoned, the Amish started to immigrate. The first group that was large enough, complete with ordained leaders, sailed on the Charming Nancy ship in 1737. For the next thirty years, the Amish kept migrating to America. With them came variations of clothing from their regions. And they also were influenced by those with whom they rubbed shoulders in colonial America.

Here’s an interesting example: Nebraska Amish women, some of the earliest Amish immigrants, did not wear bonnets. It’s thought that the adoption of the black bonnet was borrowed from the Pennsylvania Quakers. 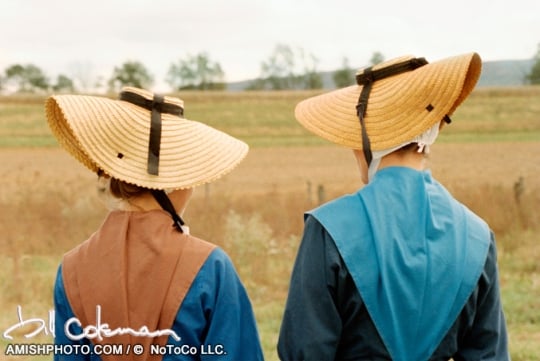 And another example: An Amish woman’s prayer cap, essentially similar to those worn in the Palatinate (Rhine Valley) in the 1700s, has been tweaked and trimmed—from the Lancaster organza “heart” to the stiff cap of many Ohio Amish.

One of my favorite stories about the developing distinction of Old Order Amish clothing comes from the 18th century, in a little town in Ohio. A young German immigrant wore to church his beloved red Mutza, a color of a coat common in the Old World but frowned upon in the New World. That red Mutza caused all kinds of church unrest—to the point where communion itself was stalled until the issue was resolved. The true story (which can be read in Heart of the Amish, which releases in May) had so much meaning to it that I wove it into Anna’s Crossing, a novel about the first Amish who came to America on the Charming Nancy.

Today, distinctive styles of Amish clothing continue to evolve. Recently, an Amish church in Independence, Iowa agreed to permit boys to wear wool caps instead of black hats during long, bitter winters. To those of us on the outside, it seems like such a trivial thing. Why not let a boy wear a warm woolen cap to school? But to the Amish, like so many of their choices, it’s a decision they make slowly, cautiously, and together.

Suzanne Woods Fisher is the bestselling author of ‘The Stoney Ridge Seasons’ and ‘The Lancaster County Secrets’ series, as well as nonfiction books about the Amish, including Amish Peace. She is a Christy award finalist and a Carol award winner. Her interest in the Anabaptist culture can be directly traced to her grandfather, who was raised in the Old German Baptist Brethren Church in Franklin County, Pennsylvania. Suzanne hosts the blog Amish Wisdom, and has a free downloadable app, Amish Wisdom, that delivers a daily Penn Dutch proverb to your smart phone. She lives with her family in the San Francisco Bay Area. You can find Suzanne on-line at suzannewoodsfisher.com. She loves to hear from readers!