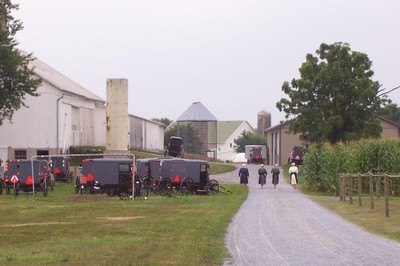 A quick note on language…as we know the first language of the Amish is Pennsylvania Dutch.  Picking up English and learning it from Amish-raised teachers in school means that certain traits of speaking and accent get passed down the lines.

I rather enjoy hearing a good thick ‘Amish English’ accent.  Sitting with Abe and Rachel in their farm home, I appreciated both the conversation as well as the almost musical quality to the language I was hearing. The Amish often pronounce words in unusual ways.  This post from last year goes into it in more detail.

Unusual turns of speech get passed down as well.  No ‘thees’ and ‘thous’, but Abe, like other Lancaster Amish, often uses the phrase ‘it spited me’, meaning something angered me or caused me regret.  After returning home after being out awhile one morning, Abe said ‘it wondered me’ when I’d get back.  Abe addresses his siblings as ‘Brother Paul’ and ‘Brother Eli’.

Little Lizzie over at Daniel’s gave me instructions using the less-often-used-in-colloquial-speech ‘you may’ rather than the more common ‘you can’.  ‘You may sweep up the manure now, Erik.’ 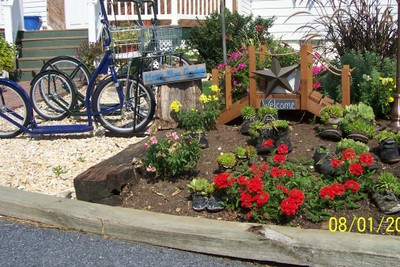 The Lancaster ‘Amish English’ accent and phraseology is a bit different from that of Holmes County or northern Indiana.  If I were better at describing the way things sound I’d take a crack at it.   I’ll just say it’s got more of an upward lilt on the vowels.

One of my Lancaster buddies who has a business tells me that Amish on the farm tend to have thicker English accents than guys like him who are out dealing with the public a lot more.  Makes sense, and I’d have to say that in my experience I’ve seen that to be true.

On getting home to Ma and Pa in NC, I caught myself speaking in a bit of an ‘Amish English’ accent.  Could have been all the shoofly pie.  Actually I’d say it was mostly unintentional but I have to admit enjoyable.

After a week spent chatting with Amish all day long, it sort of stuck with me.  Unfortunately, it wore off after about a day, and I returned to my mongrel semi-Southern/international neutral/Polish mix, whatever that actually is.

(Today’s photos courtesy of Laurie Frey.  Thanks Laurie and keep them coming!)