The Amish settlement at Piketon, Ohio was an odd one to begin with. 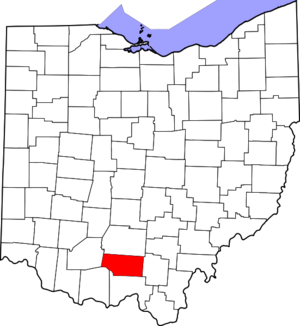 A few things made the Amish who settled here in 1949 different from most.

One was their evangelistic emphasis.  Amish traditionally do not try to convert others.  Piketon, Ohio was begun by a minister sympathetic to the idea of spreading Amish beliefs.

Secondly, they were the first Amish congregation ever to publish their own rule book, otherwise known as the Ordnung, and traditionally existing in oral form only.  Far more copies than were necessary for the congregation were produced, which hints that they were meant to be used as an evangelical tool.

Finally, the Amish of Piketon promoted the idea of assurance of salvation.  Most Amish take the approach of ‘the best we can do is follow the Lord’s commands and hope we make it’.  The Piketon Amish, however, followed a doctrine that stated that they could be certain of their fate beyond the grave.

The settlement was comprised of settlers from various communities, who started up a close-knit farm community in the rolling hills of Pike County in southern Ohio.  Interestingly, despite the fact that they supported quite an unorthodox approach to the faith, the were ‘in fellowship’ with a number of other Amish communities, having preachers visit from Indiana and Ohio, including from the giant Holmes County settlement.

According to David Luthy, the Amish who settled there appreciated the sparsely populated rural setting, and got on well with non-Amish neighbors.

So just what did this settlement in?

Word came in 1952 of government plans to built an atomic energy plant within a few miles of the settlement. 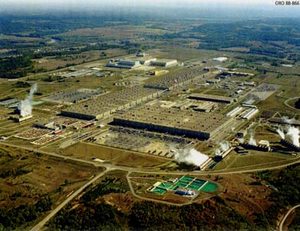 This messed up the Amish on two counts:  the massive influx of government workers and associated people would destroy the rural calm and make buggy-driving, for one thing, much more dangerous.  Secondly, the fact that a power plant would be located nearby would denote the area as a military one and a potential bombing target, and with the Korean War going on, this weighed heavily on Amish minds.  Soon after getting the news, the local Amish were looking for fresh pastures.

The facility which resulted, containing ‘some of the largest industrial structures in the world’, made nuclear material for both weapons and commercial plants.

The setlement itself was relatively tiny, maxing out at seven households.

The fate of the families?

Most of them ended up moving to the Amish settlement in Aylmer, Ontario, at least partially to protect their sons in the face of the US military draft (Amish believe in nonresistance, which prevents them from serving in the military).

The Piketon plant, one of only two uranium enrichment plants in the country, stopped production in 2001.