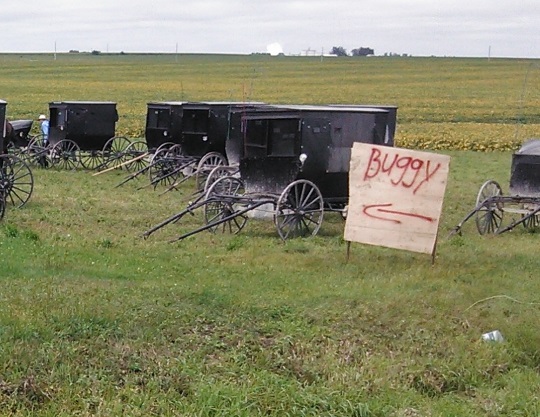 One of our readers, Carl Oliver, recently attended an event on this month’s Amish auction list.

Many Amish-attended auctions are benefit sales–raising funds for medical needs, schools, and other community-wide causes.

Others include estate sales, auctions run as a private business, or, as in today’s example, moving sales.

You see, moving when you’re an Amish farmer is not as simple as cramming the contents of the house into a Ryder truck and hitting the road.

A family may need to convert into cash equipment, livestock and other goods not easily transported to a new place. 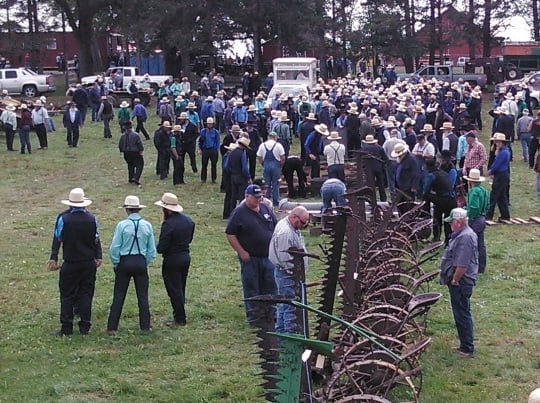 This sale was special, as you’ll learn from Carl’s comments below.

The event drew bidders from as far away as Delaware, Michigan, and Canada. According to this AP article, Rudy Gingerich has built a reputation for restoring farm equipment.

The auctioneer quoted says he never sold 28 threshers in one day, and doubts he ever will again.

One event attendee, who traveled nearly 600 miles from Nebraska, said he didn’t intend to buy anything. “Nostalgia” is why he came.

Not sure where Rudy is moving, but it sounds like his event was a success. The text which follows is Carl’s, as are the photos.

I had the pleasure of attending the Rudy Gingerich auction yesterday near Hazleton, Iowa.

I took some photos to capture the day. I particularly like the one that shows all the straw hats huddled around the auction truck. 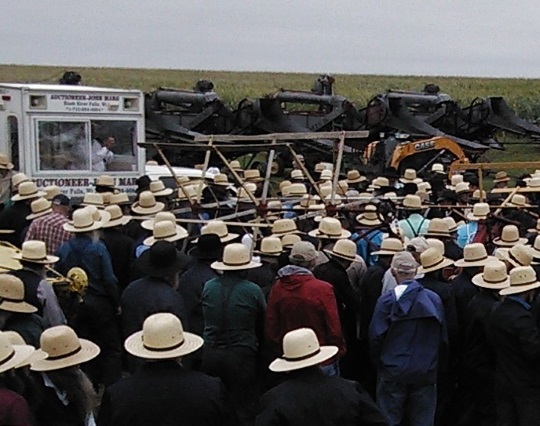 Obviously, the highlight of the auction was the line of 25 threshing machines (all but one having been meticulously restored by Rudy himself). 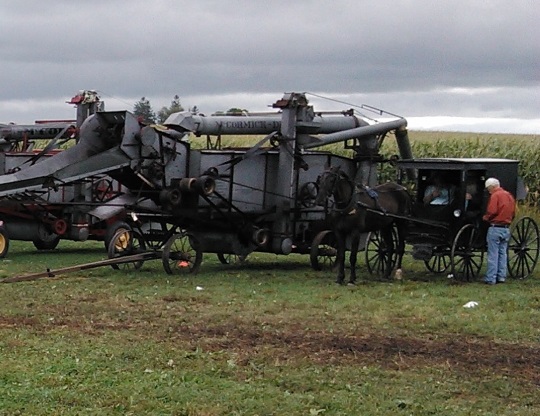 He even backed up his work with a 2,000 bushel warranty. I talked to many people at the sale and found nobody, Amish or English, who had ever seen such a lineup of threshing machines and oat binders.

Most of the machinery sold to Amish buyers for a higher price than the English collectors were willing to pay. 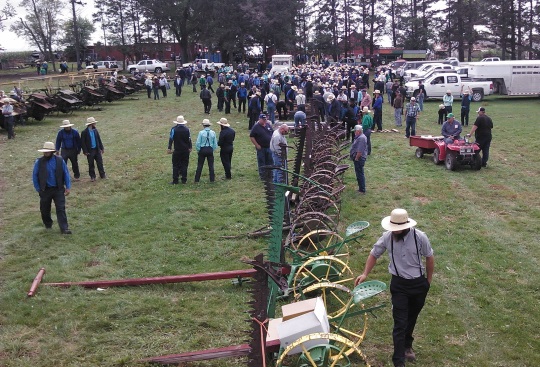 There was a delicious lunch put on by the women of the community, and home made ice cream made before our eyes with a gas powered ice cream maker. 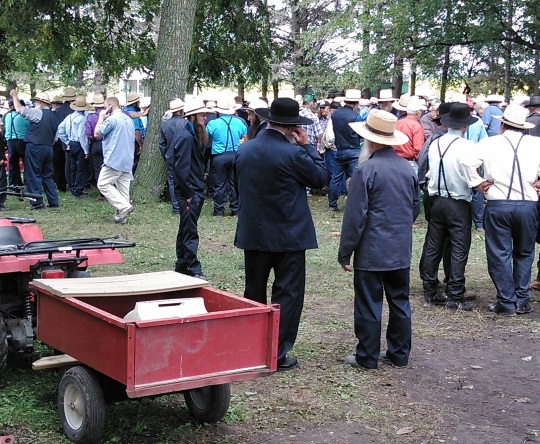 Many of the threshing machines were purchased by groups of Amish men forming there own “threshing ring” as used to be common among the English many years ago. 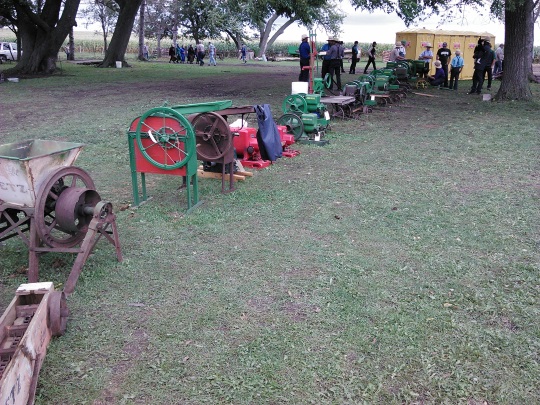 In the photo of the engines, notice the man’s vest that was left hanging on a corn sheller and the boys at the end of the line demonstrating the engine for an English man. 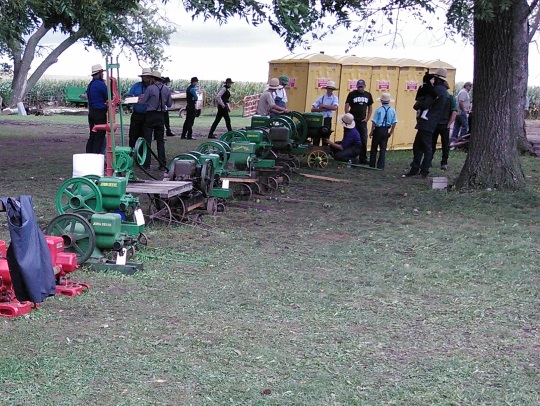 I always enjoy seeing piles of buggies and horses all tied to a fence. 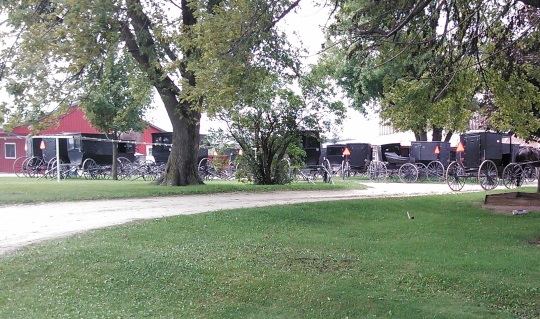 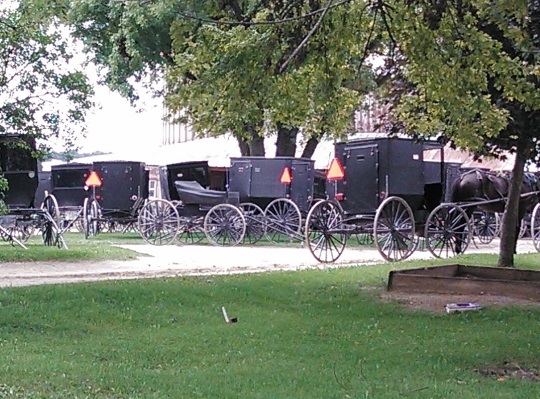 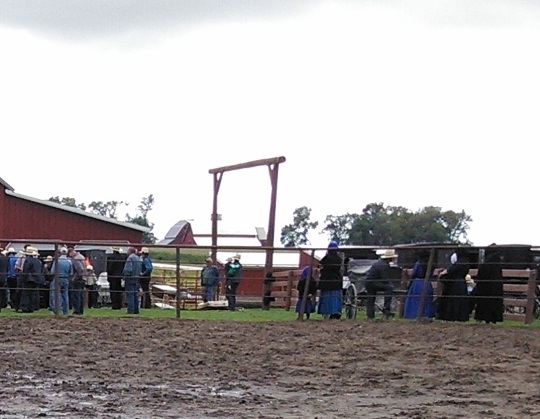 The last photo shows the painstaking attention to detail that Rudy put into his restorations. Many people would have pressure washed that machine and painted it, but he saved the original art work. 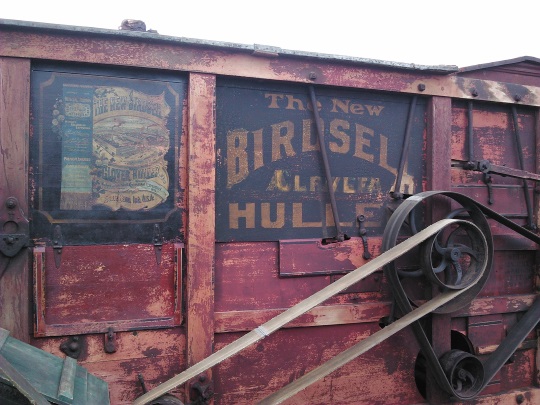