Florida Plain newspaper The Pinecraft Pauper gears up for season #2

The Pinecraft Pauper is a community newspaper of the Pinecraft neighborhood of Sarasota, Florida, home to a small but sturdy collection of Amish and Mennonites.

The Pauper was founded by local writer Daniel Fisher, and features news, human interest stories, puzzles, cartoons, tips (“Make your own carryon luggage for pennies, by taping a cardboard handle to a cardboard box”) and a healthy dollop of humor.

Contributors include Daniel, Sherry Gore (Budget scribe and author of Taste of Pinecraft) and the mysterious nautical correspondents “Captain Ahab” and “Moby Dick” (who seem to spend more time on land than at sea, but we’ll cut them some slack).  Photos are by Katie Troyer.

Daniel has kindly passed along issues from the first edition, which ran last winter.  To give you a sense of the paper, here are a few excerpts which I felt captured it well:

If you live in Sarasota you may have seen iguanas diving out of trees.  When the temperature dips below 40, these cold-blooded lizards essentially go comatose, losing their grips and toppling from their perches.  Though they may appear dead while in this state, they will usually come back to life if it warms up soon enough. 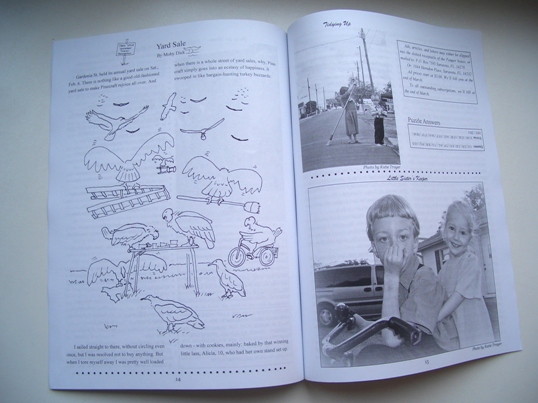 Schmidt came to Pinecraft for the first time in  ’68-’69.  Pinecraft used to be “a sand road with chicken coops.  It was pretty primitive.”  He used to come down for a month or so in the winter.  Folks asked him to play.  He said, “Pinecraft is one place where I really sharpened my skills.  I knew eight or ten songs, and played them over and over.”

These days he spends a lot of time in prisons, singing, encouraging, and ministering.  “I am well-suited for prison ministry,” said John.  “I look like a convict.”  There’s almost always a response in a prison chapel.  His message is pretty simple: Jesus Christ can change your life.

He has made 19 albums, the latest a tribute to Johnny Cash.  Schmidt said, “Not all of my songs are Christian, but they are all sanctified.”

He has written songs in Pa. Dutch, and sings them for his Pinecraft audience.  It’s funny, the Amish don’t have CD players, but he sees them mouthing along.  He said it must be magic. 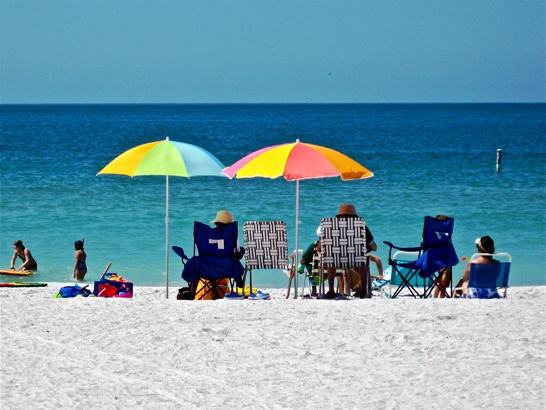 On the beach in full-color Sarasota, Florida

On Thursday morning, the 4th, Nik Wallenda went for a little walk.  So did you, you say?  But were you 200 feet up, on a 5/8 in. cable? Nik was.  He walked on a tightrope streched taut between the roofs of the Ritz-Carlton and the Watergate Condominium Building, right downtown, north of Marina Jack’s.

Nik is a 7th generation Wallenda.  He lives in Sarasota.  The Flying Wallendas were German.  They used to tour Europe in the 1900s, performing highwire acts.  In their home country they were billed as Die Fliegenden Wallenda.  Nik’s greatgrandfather, Karl, was born in 1905.  He began performing at age six.  Some years later, John Ringling saw Karl perform in Cuba, and swiped him up at once, to be part of the Ringling Bros. Circus.

In 1978 Karl fell and was killed, performing a walk in Puerto Rico very like the one which this crowd in Sarasota was awaiting.  Thursday’s walk was to be a tribute from Nik to his greatgrandfather.  Moreover, it was held to promote Circus Sarasota, which is to show daily through the latter half of February, in the tent at 12th & Tuttle.

But they knew what they were doing.  And so did Nik.  He paused to rest, shaking his hand to alleviate fatigue.  He went on.  400 feet, 500 feet, 575 feet, 595 feet…and then he ran the last couple of steps.  He had done it!  How the crowd roared!  He turned and waved acknowledgement.

Moby Dick was there watching, too. When asked if he would consider undertaking such a feat he said he wouldn’t, unless he were allowed to do it on stilts, and on condition that the cable be covered with a fresh layer of thick grease, to make it challenging.

Other features from the first season include a review of Yoder’s Restaurant; “A Pinecraft Artisan”, on wheelchair-bound painter Barbara Zook; Birdbox, a series of articles by 15-year-old Steven Fisher, “avid birder from Newburg, Pa.”;  “Ed”, on 92-year-old local Ed Bender, “finalist for World’s Oldest Full-Time Active Mechanic”; “The Auction”, on the record-setting 13th Florida Haiti Benefit Auction;  and numerous health tips and recipes. 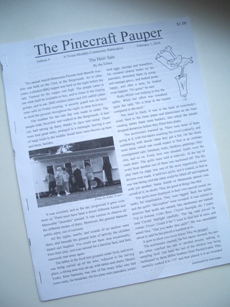 The front page of issue 4 of the Pauper, from the inaugural season

The Pauper was temporarily retired after the 2009-10 winter season.  Sherry Gore has since taken over editorship, and under her guidance it has come roaring back for another season.

The first issue of the second run has just been released, and I can say it is continuing in the same vein.  Highlights in this issue include “Christmas, Florida” (on a small town near Orlando),  “Mischievous Logic Puzzles”, a recipe for squirrel stew, and a report on the Flying Dutchman’s hard landing (he’s pretty banged up, but sounds like he’ll survive).

(SEP 2012 UPDATE: to the best of our knowledge the Pinecraft Pauper is not currently being published).The Pinecraft Pauper is published twice per month, and sells for $1.  It is black-and-white, with photos and illustrations.  There are 10 issues, beginning December 15th and running through April 6th, 2011. For subcriptions send $12 to Pinecraft Village Publishers, P.O. Box 50231 Sarasota, FL 34232 (single issues are $1.50).

Read an interview about Pinecraft with editor Sherry Gore.