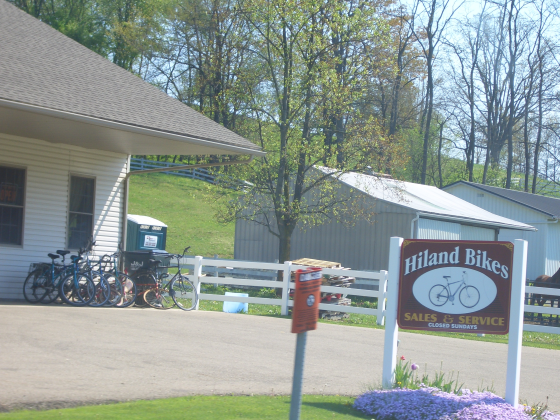 Amish America reader Pete Ventura shares the following, about a visit to an Amish bicycle business:

Recently I returned home from Holmes County. While I was up there I stopped in at a local bicycle shop located about a half mile north east of Charm, out in the middle of nowhere.

I bought 97 dollars worth of equipment. When I went to pay, the owner said he didn’t take credit cards. I explained to him that I would only be able to purchase one item because I only had 100 dollars on me and I would probably need some of that money to spend on my way home.

He asked me if I had a check and I explained to him that my checkbook was back in Centerville, Ohio.He said that was not a problem and I could just mail the money to him. I was stunned and asked “You mean to tell me you would trust me?”  He said “Well, why shouldn’t I?”

“The owner is now very, very friendly but I can guarantee you that there would be no way I would walk out of his store without paying 97 dollars.”

Very interesting anecdote.  The owner seemed quite willing to trust an outsider– which understandably seems to have surprised Pete.  Pete adds that “the last time I ever remember something like that happening was back in the 50’s when my dad shook hands with a man and said he would be back in the morning with the money.”

I don’t know that you’d see all Amish willing to do the same as the bike shop owner did, or even most–though I would think it fair to say the likelihood would be greater with an Amish firm.

You’d also see similar behavior to be more likely among Amish themselves and within the local community, for the obvious reasons.  At the same time you do happen upon “In God We Trust–All Others Pay Cash”-type signs inside Amish businesses as well.  Amish have been burned too.

I also wonder, is a “tendency to trust” a strength or weakness?

Does an instinctive trust tend to set one up for better relationships and overall better results, or rather leave one exposed to being taken advantage of?