Today’s guest post and feature photo are by David Arment of armentphoto.com.

The Pumpkinvine (one word) Trail is part of a trail system running from Elkhart, Indiana to Shipshewana, Indiana. It is a liner park which is very popular and has many bicyclers and people strolling during the nice times of the year. The trail follows the old rail bed of the Pumpkinvine Railroad (to read more about the Pumpkinvine railroad history here is a link.)

I’ve always suspected that the reason this stretch of rail was called “Pumpkinvine” was because the tracks meandered across the countryside like a pumpkin vine, in other words in less than a straight line. If you ride the trail from Shipshewana to Middlebury you will see the trail is not a “straight shot”. 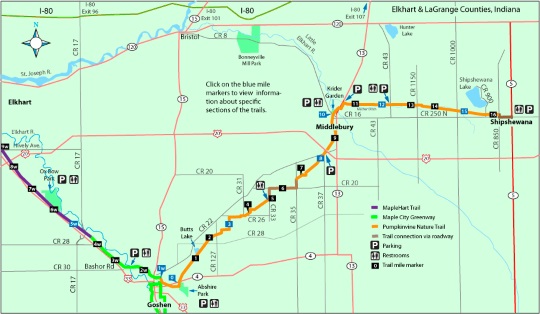 To “the English” the Pumpkinvine is a wonderful liner park used for walks and bicycle rides in the spring, summer and fall. To the Amish it is more. It is an alternative road. A road without motorized traffic. Horses are not allowed on the trail, but many Amish use it and bicycle to work and to Shipshewana to shop, or to enjoy the free concerts on Friday night downtown or for other similar events.

The Shipshewana “city fathers” considered trying to keep the trail clear in the winter to help those who needed it to get to town. As with most things, the subject of money was an issue and who was going to pay to keep the trail open… and so the idea died. Now everyone must use County Road 250, otherwise known as the Middlebury Shipshewana road, to get to Shipshewana in the winter. I don’t know if the idea of keeping the trail open in winter was ever discussed in Middlebury.

As winter gets more intense the use of bicycles wanes, but there always seem to be a few Amish who venture out into the cold and snow with their bicycles, no matter the cold or intensity of the wind. I sometimes wonder if they do (or should) make snow tires for bicycles.

Below is a picture taken November 28, 2014 of an Amish lady near dusk riding away from town on the Pumpkinvine. As you can see we had some snow on the ground. The sun heated the black tar during the day but as the sun set the water on the trail turned to ice and walking or riding a bicycle was “iffy”. 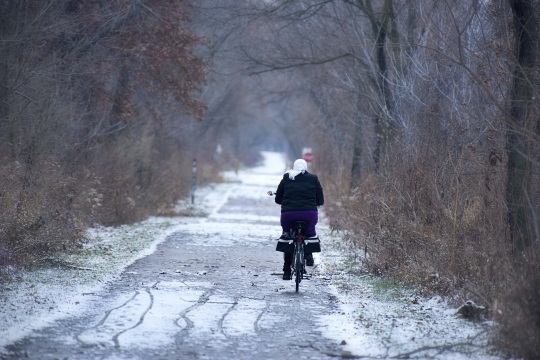